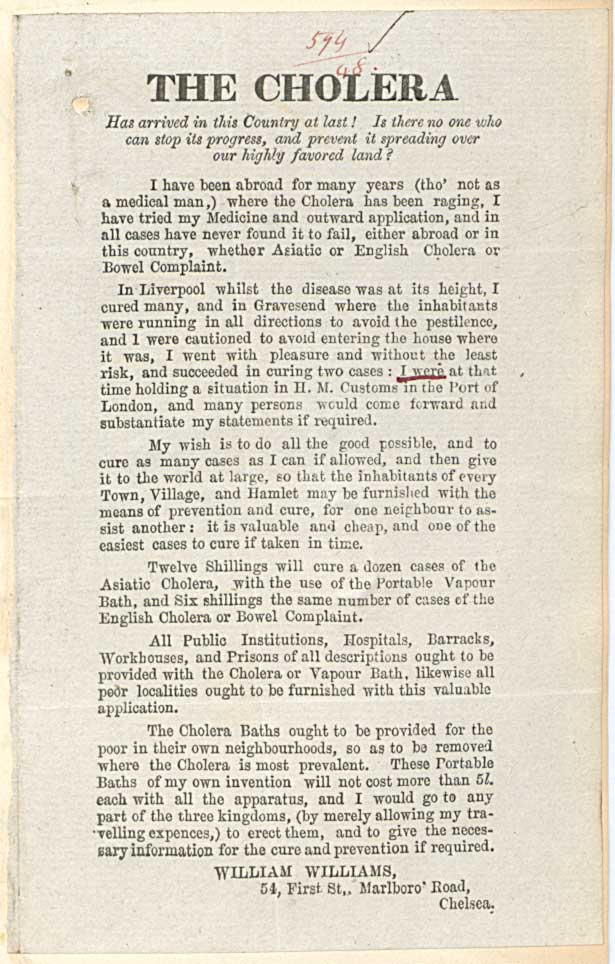 Has arrived in this Country at last! Is there no one who can stop its progress, and prevent it spreading over our highly favoured land?

I have been abroad for many years (tho’ not as a medical man), where the cholera has been raging, I have tried my Medicine and outward application, and in all cases have never found it to fail, either abroad or in this country, whether Asiatic or English  cholera or Bowel Complaint.

In Liverpool whilst the disease was at its height, I cured many, and in Gravesend where the inhabitants were running in all directions to avoid the pestilence, and I [were] cautioned to avoid entering the house where it was, I went with pleasure and without the least risk, and succeeded in curing two cases: I [was] at that time holding a situation in H.M. Customs in the Port of London, and many persons would come forward and substantiate my statements if required.

My wish is to do all the good possible, and to cure as many cases as I can if allowed, and then give it to the world at large, so that the Inhabitants of every Town, Village and Hamlet may be furnished with the means of prevention and cure, for one neighbour to assist another: it is valuable and cheap, and one of the easiest cases to cure if taken in time.

Twelve Shillings will cure a dozen cases of the Asiatic Cholera with the use of the Portable Vapour Bath, and Six Shillings the same number of cases of the English Cholera or Bowel Complaint.

All Public Institutions, Hospitals, Barracks, Workhouses and Prisons of all descriptions ought to be provided with the Cholera or Vapour Bath, likewise all poor localities ought to be furnished with this valuable application.

The Cholera Baths ought to be provided for the poor in their neighbourhoods, so as to be removed where the Cholera is most prevalent. These Portable Baths of my own invention will not cost more than 5 pounds each with all the apparatus, and I would go to any part of the three kingdoms, (by merely allowing my travelling expenses,) to erect them, and to give the necessary information for the cure and prevention if required.