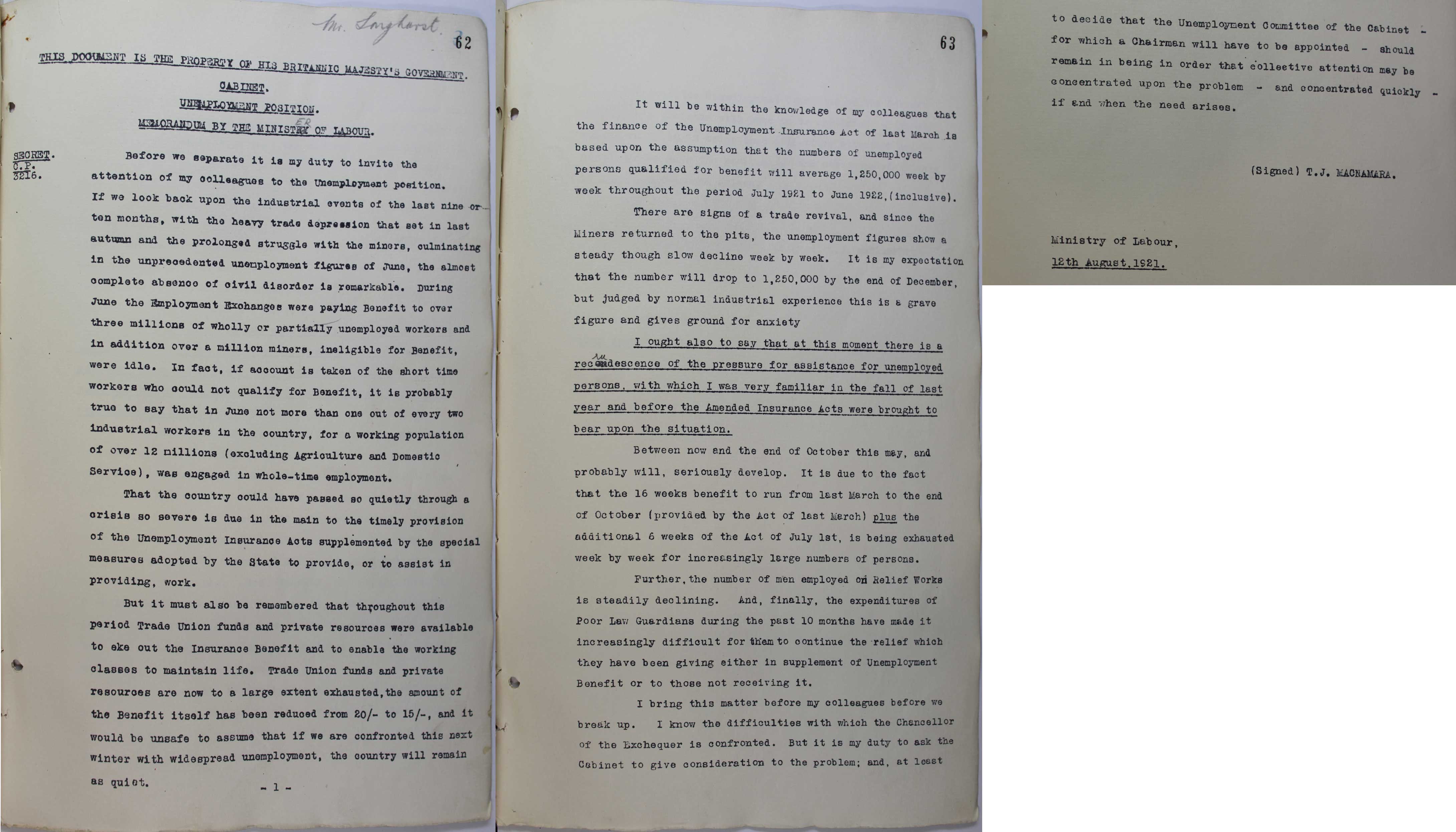 Memorandum from the Minister of Labour on unemployment, 1921 (Catalogue ref: CAB 24/127)

THIS DOCUMENT IS THE PROPERTY OF HIS BRITANNIC MAJESTY’S GOVERNMENT

MEMORANDUM BY THE MINISTER OF LABOUR

Before we separate it is my duty to invite the attention of my colleagues to the Unemployment position. If we look upon the industrial events of the last nine or tenth months, with the heavy trade depression that set in last autumn and the prolonged struggle with the miners, culminating in the unprecedented unemployment figures of June, the almost complete absence of civil disorder is remarkable. During June, the Employment Exchanges were paying Benefit to over three millions of wholly or partially unemployed workers and in addition over a million miners, ineligible for Benefit, were idle. In fact, if account is taken of the short time workers who could not qualify for Benefit, it is probably true to say that in June not more than one out of every two industrial workers in the country, for a working population of over 12 millions (excluding Agriculture and Domestic Service) was engaged in whole-time employment.

That the whole country could have passed so quietly through a crisis so severe is due in the main to the timely provision of the Unemployed Insurance Acts supplemented by the special measures adopted by the State to provide, or to assist in providing, work.

But it must also remembered that throughout this period Trade Union funds and private resources were available to eke out the Insurance Benefit ant to enable the working classes to maintain life. Trade Union funds and private resources are to a large extent exhausted, the amount of the Benefit itself has been reduced from 20/- to 15/-, and it would be unsafe to assume that if we are confronted this next winter with widespread unemployment, the country will remain as quiet.

It will be within the knowledge of my colleagues that the finance of the Unemployment Insurance Act of last March is based upon the assumption that the numbers of unemployed person qualified for benefit will average 1,250,000 week by week throughout the period July 1921 to June 1922, (inclusive).

There are signs of a trade revival, and since the Miners returned to the pits, the unemployment figures show a steady though slow decline week by week. It is my expectation that the number will drop to 1,250,000 by the end of December, but judged by normal industrial experience this is a grave figure and gives ground for anxiety.

I ought also to say that at this moment there is a recrudescence [renewal] of the pressure for assistance for unemployed persons, with which I was very familiar in the fall of last year and before the Amended Insurance Acts were brought to bear upon the situation.

Between now and the end of October this may, and probably will, seriously develop. It is due to the fact that the 16 weeks benefit to run from last March to the end of October (provided by the Act of last March) plus the additional 6 weeks of the Act of July 1st, is being exhausted week by week for increasingly large numbers of persons.

Further the number of unemployed on Relief Works is steadily declining. And finally, the expenditures of the Poor Law Guardians during the past 10 months have made it increasingly difficult for them to continue the relief which they have been giving either in supplement of Unemployment Benefit or to those not receiving it.

I bring this matter before my colleagues before we break up. I know the difficulties with which the Chancellor of the Exchequer is confronted. But it is my duty to ask the Cabinet to give consideration to the problem; and, at least to decide that the Unemployment Committee of the Cabinet- for which a Chairman will be appointed- should remain in being in order that collective attention may be concentrated upon the problem-and concentrated quickly-if and when the need arises.