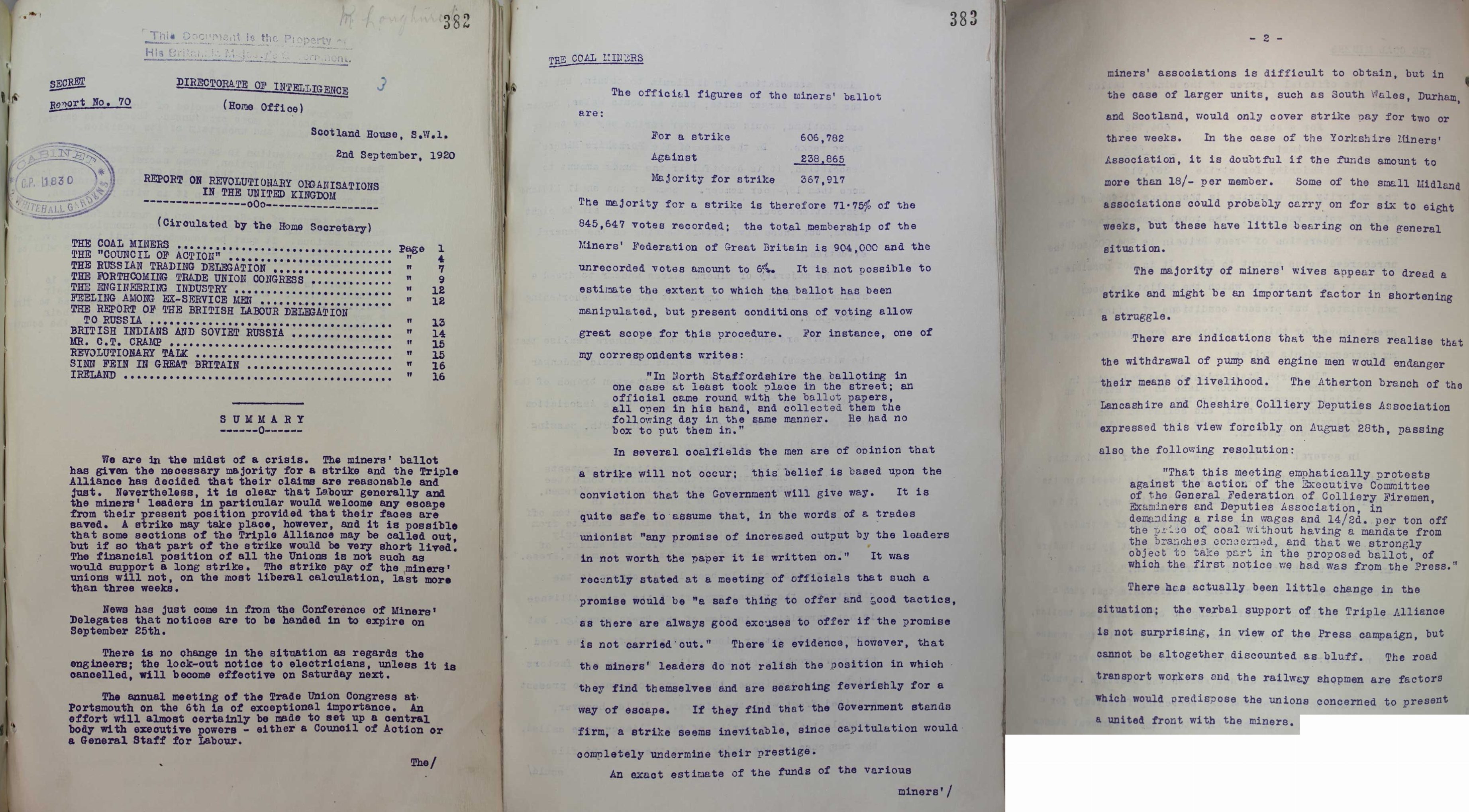 Extract from report by Directorate of Intelligence (Home Office) on the ballot for a miners’ strike, 2 September 1920 (Catalogue ref: CAB 24/111)

IN THE UNITED KINGDOM
(Circulated by the Home Secretary)

THE “COUNCIL OF ACTION”

THE REPORT OF THE BRITISH LABOUR DELEGATION TO RUSSIA

We are in the midst of a crisis. The miners’ ballot has given the necessary majority for a strike and the Triple Alliance has decided that their claims are reasonable and just. Nevertheless, it is clear that Labour generally and the miners’ leaders in particular would welcome any escape from their present position provided that their faces are saved. A strike may take place, however, and it is possible that some sections of the Triple Alliance may be called out, but if so that part of the strike would be very short lived. The financial position of all the Unions is not such as would support a long strike. The strike pay of the miners’ unions will not, on the most liberal calculation, last more than three weeks.

News has just come in from the Conference of Miners’ Delegates that notices are to be handed in to expire on September 25th.

There is no change in the situation as regards the engineers; the lock-out notice to electricians, unless it is cancelled, will become effective on Saturday next.

The annual meeting of the Trade Union Congress at Portsmouth on the 6th is of exceptional importance. An effort will almost certainly be made to set up a central body with executive powers-either a Council of Action or a General Staff for Labour.

The official figures of the Miners’ ballot are:

The majority for a strike is therefore 71.75% of the 845,647 votes recorded; the total membership of the Miners’ Confederation of Great Britain is 904,000 and the unrecorded votes amounted to 6%. It is not possible to estimate the extent to which the ballot has been manipulated, but present conditions of voting allow great scope for this procedure. For instance, one of my correspondents writes:

“In North Staffordshire the balloting in one case at least took place in the street; an official came round with the ballot papers, all open in his hand, and collected them the following day in the same manner. He had no box to put them in”.

In several coalfields the men are of the opinion that a strike will not occur; this belief is based upon the conviction that the Government will give way. It is quite safe to assume that, in the words of a trade unionist: “any promise of increased output by the leaders is not worth the paper it is written on”. It was recently stated at a meeting of officials that such a promise would be “a safe thing to offer and good tactics, as there are always good excuses to offer if the promise is not carried out”. There is evidence, however, that the miners’ leaders do not relish the position in which they find themselves and are searching feverishly for a way to escape. If they find that the Government stands firm, a strike seems inevitable, since capitulation would completely undermine their prestige.

An exact estimate of the funds of the various miners’ associations is difficult to obtain, but in the case of larger units, such as South Wales, Durham, and Scotland, would only cover strike pay for two or three weeks. In the case of the Yorkshire Miners’ Association, it is doubtful if the funds amount to more than 18/- per member. Some of the small Midland associations could probably carry on for six to eight weeks, but these have little bearing on the general situation.

The majority of miners’ wives appear to dread a strike and might be an important factor in shortening a struggle.

There are indications that the miners realise that the withdrawal of pump and engine men would endanger their means of livelihood. The Atherton branch of the Lancashire and Cheshire Colliery Deputies Association expressed this view forcibly on August 28th, passing also the following resolution:

“That this meeting emphatically protests against the action of the Executive Committee of the General Federation of Colliery Firemen, Examiners and Deputies Association, in demanding a rise in wages and 14/2d per ton off the price of coal without having a mandate from the branch concerned, and that we strongly object to take part in the proposed ballot, of which the first notice we had was from the Press.”

There has actually been little change in the situation; the verbal support of the Triple Alliance is not surprising, in view of the Press campaign, but cannot be altogether discounted as a bluff. The road transport workers and the railway shopmen are factors which would predispose the unions concerned to present a united front with the miners. …