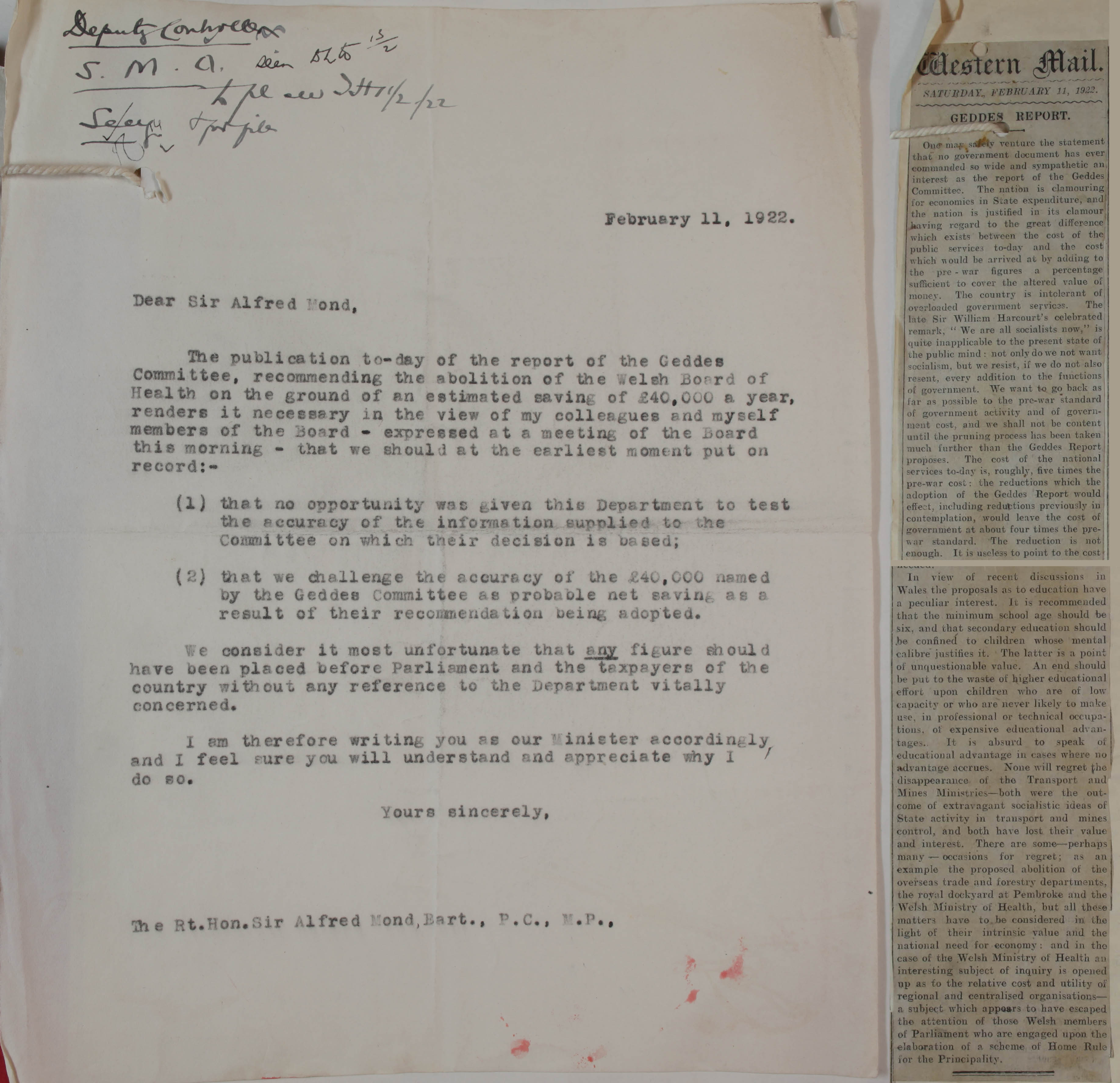 The publication today of the report of the Geddes Committee, recommending the abolition of the Welsh Board of Health on the ground of an estimated saving of £40,000 a year, renders it necessary in the view of my colleagues and myself, members of the Boards- expressed at a meeting of the Board this morning- that we at the earliest moment put on record-:

We consider it most unfortunate that any figure should have been placed before Parliament and the Taxpayers of the country without any reference to the Department vitally concerned.

I am therefore writing to you as our Minister accordingly and feel sure you will understand and appreciate why I do so.

One may safely venture the statement that no government document has ever commanded so wide and sympathetic an interest as the report of the Geddes Committee. The nation is clamouring for economies in State expenditure, and the nation is justified in its clamour having regard to the great difference which exists between the cost of the public services today and the cost which would be arrived at by adding to the pre-war figures a percentage sufficient to cover the altered value of money. The country is intolerant of overloaded government services. The late Sir William Harcourt’s celebrated remark: “We are all socialists now”, is quite inapplicable to the present state of the public mind: not only do we not want socialism, but we resist, if we do not also resent, every addition to the functions of government. We want to go back as far as possible to the pre-war standard of government activity and of government cost, and we shall not be content until the pruning process has been taken much further than the Geddes Report proposes. The cost of the national services today is, roughly, five times the pre-war cost: the reductions which the adoption of the Geddes Report would effect, including reductions previously in contemplation, would leave the cost of government at about

four times the pre-war standard. The reduction is not enough

In view of recent discussions in Wales the proposals as to education have a peculiar interest. It is recommended that the minimum school age should be six and that secondary education should be confined to children whose mental calibre justifies it. The latter is a point of unquestionable value. An end should be put to the waste of higher educational effort upon children who are of low capacity or who are never likely to make use, in professional or technical occupations, of expensive education advantages. It is absurd to speak of the educational advantage in cases where no advantage accrues. None will regret the disappearance of the Transport and Mines Industries—both were the outcome of extravagant socialist ideas of State activity in transport and mines control.—occasions for regret; as an example the proposed abolition of the overseas trade and forestry departments, the royal dockyard at Pembroke and the Welsh Ministry of Health, but all these matters have to be considered in the light of their intrinsic value and the national need for economy; in the case of the Welsh Ministry of Health an interesting subject of inquiry is opened up as to the relative coast and utility of regional and centralised organisations—a subject which appears to have escaped the attention of those Welsh members of Parliament who are engaged upon a scheme of Home rule for the Principality.