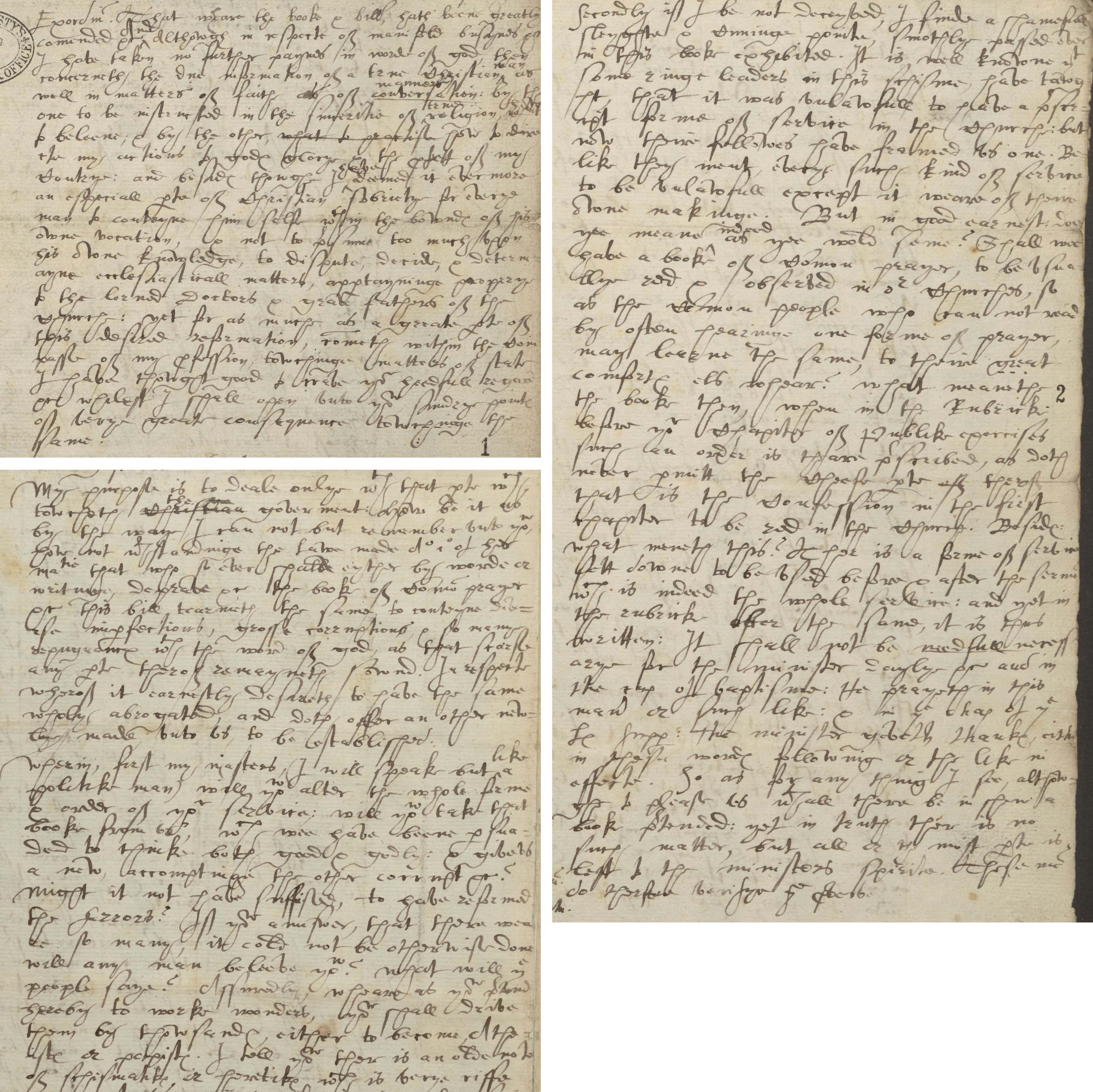 The puritans continued to campaign for further church reform on a number of key issues in the 1580s and 1590s, including reform (or abolition) of the Book of Common Prayer.  This is an extract from the conservative Richard Bancroft’s feisty reply.

…That where the book & bill hath been greatly commended &c And although in respect of manifold business &c I have taken no further pains in word of god then well in matter of faith, as of conversation manner: by the one to be instructed in the sincerity of true religion, is hard to believe; & by the other, what to practise how to direct my actions by god’s glory & the profit of my Country: and besides though I have deemed it ever more a special part of Christian sobriety for every man to convey himself within the bounds of his own vocation, & not to presume too much upon his own knowledge, to dispute, decide & determine ecclesiastical matters, appertaining properly to the learned doctors & great fathers of the Church: yet for as much as a great part of this desire reformation cometh within the compass of my profession touching matters of state, I have thought good to crave your heedful regard &c whilst I shall open unto you sundry points of very great consequence touching the same…

… My purpose is to deal only with that part which touches Christian government: how be it as by the way I cannot but remember unto you how notwithstanding the law made Ao 1o of her majesty [in the first year of her reign] that who so ever shall be either by word or writing, deprave [corrupt] &c the book of Common prayer &c this bill termed the same to contain diverse imperfections, gross corruptions, & so many repugnances [repulsive treatment of] with the word of god, as that scarce any part there of remain sound.  In respect where of it earnestly desired to have the same wholly abrogated [abolished] and doth offer another newly made unto us, to be established.

Wherein, first my masters, (I will speak but like a politike man [politician]) will you alter the whole form & order of your service: will you take that book from us, which we have been persuaded to think both good & godly: & give us a new, accounting the other corrupt &c? Might it not have sufficed to have reformed the errors?  If your answer, that there were so many, it could not be otherwise done, will any man believe you?  What will the people say?  Assuredly, whereas you pretend hereby to work wonders, you shall drive them by thousands, either to become atheists or papists.[1]  I tell you there is an old motto of schismatics or heretics, which is very rife amongst us: & I think it is in the scriptures: Semper descentos, et nuquem ad scitiam veritatu provenientes.[2] Assuredly all good men do begin herby to suspect you.

Secondly if I be not deceived, I find a shameless sleight & cunning point, smoothly passed over in this book exhibited.  It is well known that some ring leaders in this schism, have taught that it was unlawful to have a prescribed form of service in the Church: but now their fellows [people with the same views] have framed us one.  Be like they meant every such kind of service to be unlawful, except it were of their own making.  But in good earnest do ye mean indeed as ye would seem? Shall we have a Book of Common Prayer, to be usually read & observed in our Churches, so as the Common people who cannot read by often hearing one form of prayer, may learn the same, to their great comfort elsewhere?  What means the book then, when in the Rubric [instructions] before your Chapter of Public exercises such an order is there prescribed, as doth never permit the Chief part of there of that is the Confession in the first chapter to be read in the Church. Besides what means this? There is a form of service set down to be used before & after the sermon which is indeed the whole service: and yet in the rubric after the same, it is thus written: It shall not be needful necessary for the minister daily etc. and in the [chapter] of baptism: He prays in this manner or such like: & in the chapter of the lord’s supper: The minister gives thanks, either in these words following or the like in affect.  So as for anything I see, although to please us with all there be in show a book pretended: yet in truth there is no such matter, but all or the most part is left to the minister’s spirit [discretion].  Those men do therefore verify proverb.

[1] Common term for Catholics in this period, a term of abuse.

[2] ‘Always descending but never coming to the ignorance of the truth’.