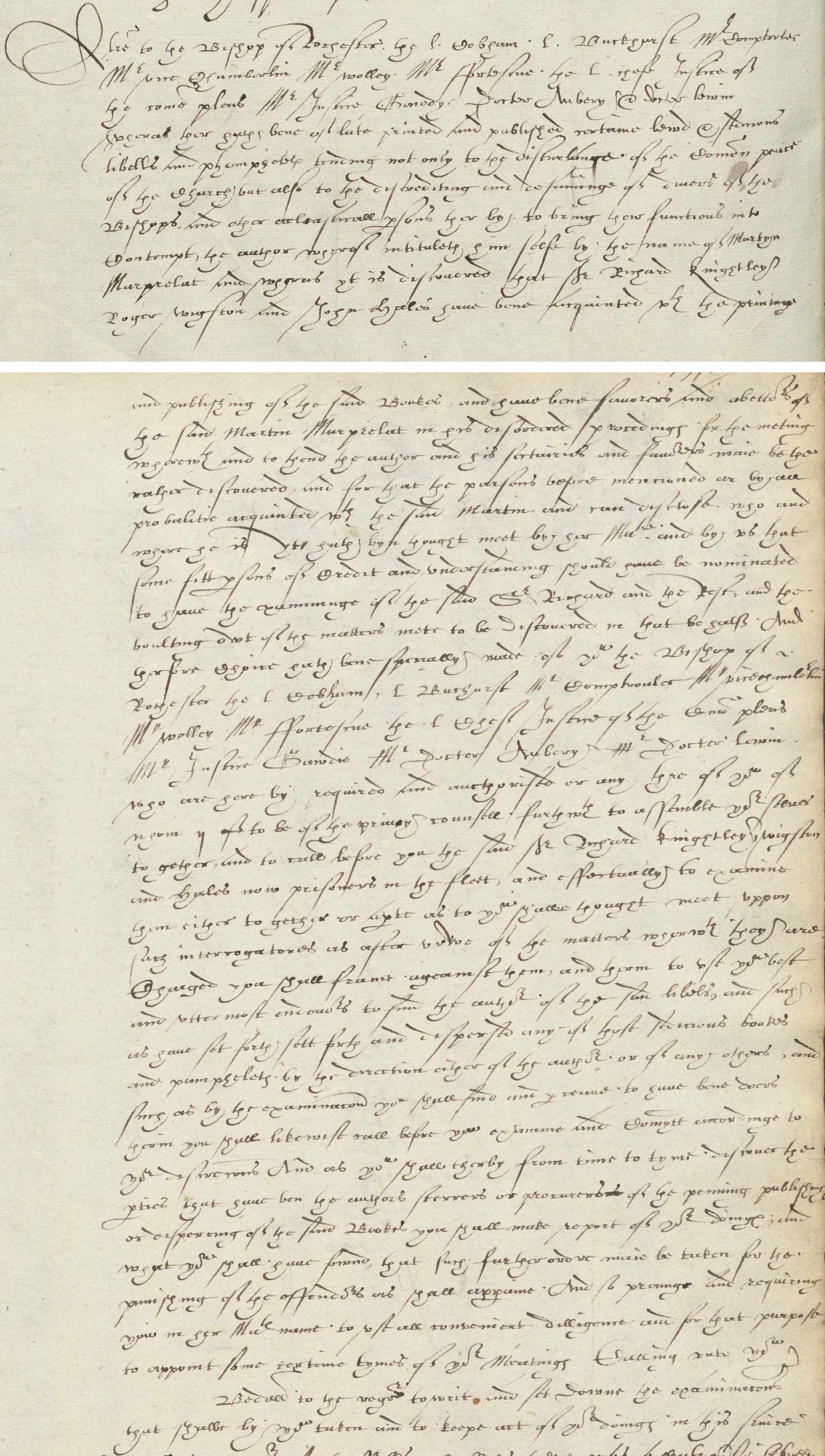 In the late 1580s, an unknown author wrote under the name Martyn Marprelate: he printed pamphlets that attacked the structure of the church and its organisation into the system of bishoprics. ‘Marprelate’ was part of a larger movement of Presbyterian radical reform of the established church and there is debate about his true identity.

A letter to the Bishop of Rochester [John Young] the Lord Cobham, Lord Buckhurst, Mr Comptroller [Sir James Croft , in charge of the financial accounts] Mr Vice-Chamberlain [Sir Thomas Heneage], Mr Wolley, Mr Fortescue, the Lord Chief Justice of the Common Pleas [Sir Edmund Anderson],  Mr Justice Gawdy, Doctor Aubery & Doctor Lewin. Whereas there hath been of late printed and published certain lewd [obscene] & seditious libels [language which encourage rebellion against the government] and pamphlets tending not only to the disturbing of the Common peace of the Church but also to the discrediting and defaming of divers [several] of the Bishops, and other ecclesiastical persons there by to bring their functions [duties] into contempt.  The author where of intituleth [called] himself by the name of Martyn Marprelate and whereas it is discovered that Sir Richard Knightley Roger Wigton and John Hales have been acquainted with the printing

and publishing of the said Books and have been favourers and abettors [supporters] of the said Martin Marprelate in his disordered proceedings for the meeting wherewith and to the end the author and his sectaries* and favourers may be the rather discovered and for that the persons before mentioned are probably acquainted with the said Martin and can disclose [tell him] who and what he is yet hath been thought meet by her Majesty and by us. That some fit persons of Credit and understanding should [have to be] nominated to have the examining of the said Sir Richard and the rest, and the boulting out [revealing] of the matter mete [suitable] to be discovered in that behalf.  And therefore choice hath been specially made of you the Bishop of Rochester, the Lord Cobham, Lord Buckhurst, Mr Comptroller, Mr Vice-Chamberlain, Mr Wolley, Mr Fortescue, the Lord Chief Justice of the Common Pleas, Mr Justice Gawdye, Doctor Aubery, Doctor Lewin who are here by required and authorised. Any three of you, of whom two, to be of the Privy counsel forthwith to assemble yourselves to gather and to call before you the said Sir Richard Knightley Wigston and Hales now prisoners in the fleet, and effectually to examine them either together or apart [separately] as to you shall be thought meet upon such interrogatories as after view of the matters wherewith they are charged you shall frame against them. And then to use your best and uttermost endeavours to find the author of the said libels, and such as have set forth and dispersed any of these seditious books and pamphlets by the direction either of the author or of any others, and such as by the examination you shall find and perceive to have been doers there in you shall likewise call before you examine and Committee according to your discretions. And as you shall there by from time to time discover the parties that have been the authors sterrers [distributors of the pamphlets] or procurers of the penning [writing], publishing or dispersing of the said books you shall make report of your doings and what you shall have found, that such farther order may be taken for the punishing of the offenders as shall appertaine [be appropriately punished]  And so praying and requiring you in her Majesty’s name to use all convenient diligence and for that purpose to appoint some certain times of your meetings, calling unto you Bedell, to the register to write and set down the examinations [evidence] that shall be by you taken and to keep account of your doings in this service…

*Sectaries, suggesting members of a sect, is used here as a term of abuse and also to emphasise the zeal of the reformers.