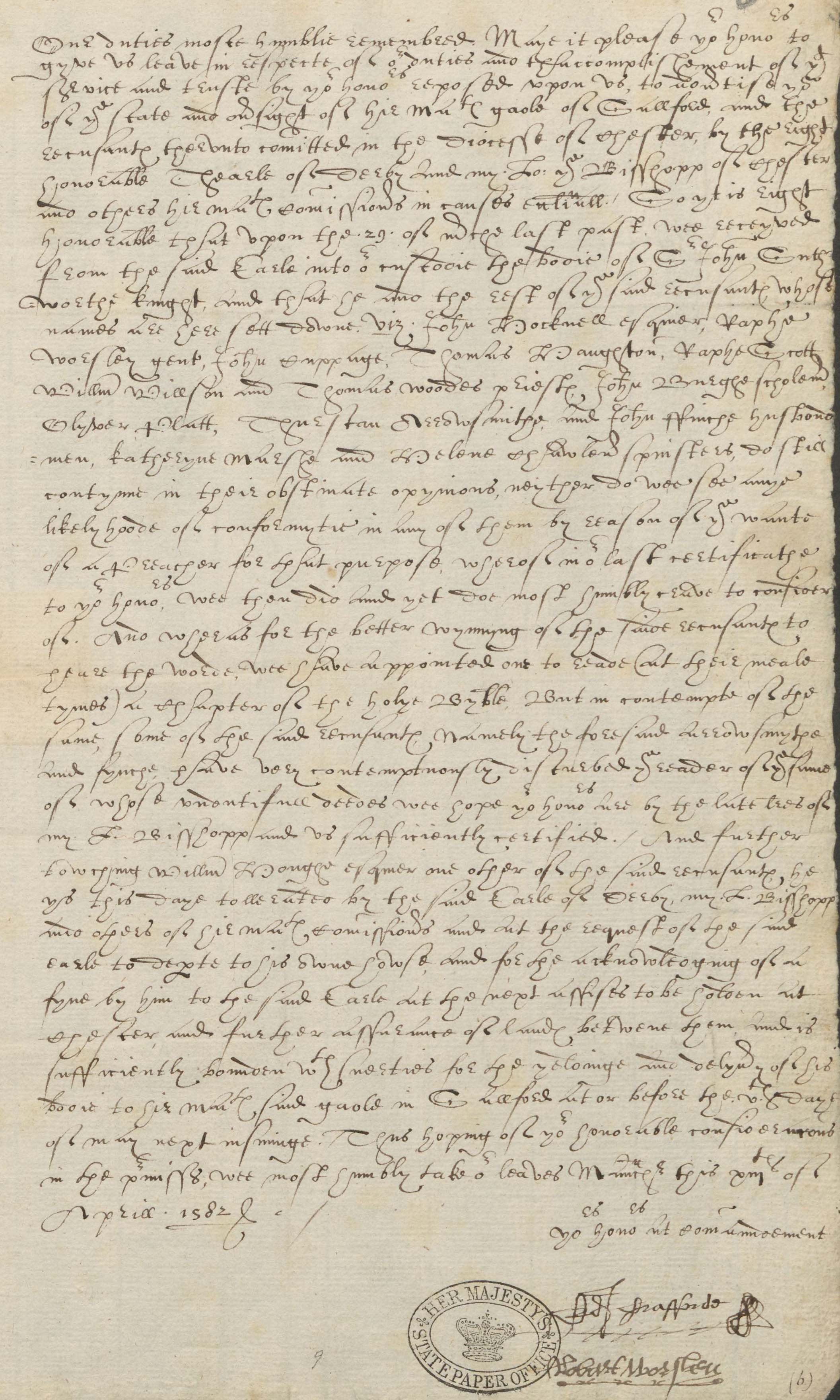 This source offers an insight into the perceptions of protestant officials on why Catholic recusants refused to conform to the Elizabethan settlement.

Our duties most humbly remembered. May it please your honours to give us leave in respect of our duties and the accomplishment of that service and trust by your honours reposed upon us, to advertise [explain to] you of the state and oversight of her Majesty’s gaol of Salford and the recusants there unto committed in the diocese of Chester, by the right honourable the earl of Derby and my Lord the Bishop of Chester [William Chaderton] and others her majesty’s Commissioners in causes ecclesiastical.  So it is right honourable that upon the 29th of March last past we received from the said Earl into our custody the body of Sir John Southworth knight and that he and the rest of the said recusants whose names are here set down. viz. John Hicknell esquire, Raphe Worsley gentleman, John Suppage, Thomas Haughton, Raphe Scott, William Willson and Thomas Woodes priests, John Burgh schoolmaster, Oliver Platt, Thurstan Arrowsmithe, and John Finche husbandmen, Katheryn Marshe and Helene Chawlener spinsters, do still continue in their obstinate opinions, neither do we see any likelihood of conformity in any of them by reason of the want of a preacher for that purpose, whereof in our last certificate [report or account] to your honours we then did and yet do most humbly crave to consider of.  And where as for the better winning of the said recusants to hear the word, we have appointed one to read (at their meal times) a chapter of the holy Bible.  But, in contempt of the same, some of the said recusants, namely the foresaid Arrowsmith and Fynch have very contemptuously disturbed the reader of the same of whose undutiful deeds we hope your honours are by the late letters of my Lord Bishop and us, sufficiently certified [made aware].  And further touching William Houghe esquire, one other of the said recusants, he is this day tolerated by the said Earl of Derby, my Lord Bishop and others of her Majesty’s Commissioners and at the request of the said earl to depart to his own house and for the acknowledging of a fine by him to the said Earl at the next assizes [courts] to be held at Chester, and further assurance of lands between them and is sufficiently bound with sureties for the yielding and delivery of his body to her Majesty’s said gaol in Salford at or before the 5th day of May next ensuing.  This hoping of your honourable consideration in the premises, we most humbly take our leaves, Manchester this 8th of April 1582.