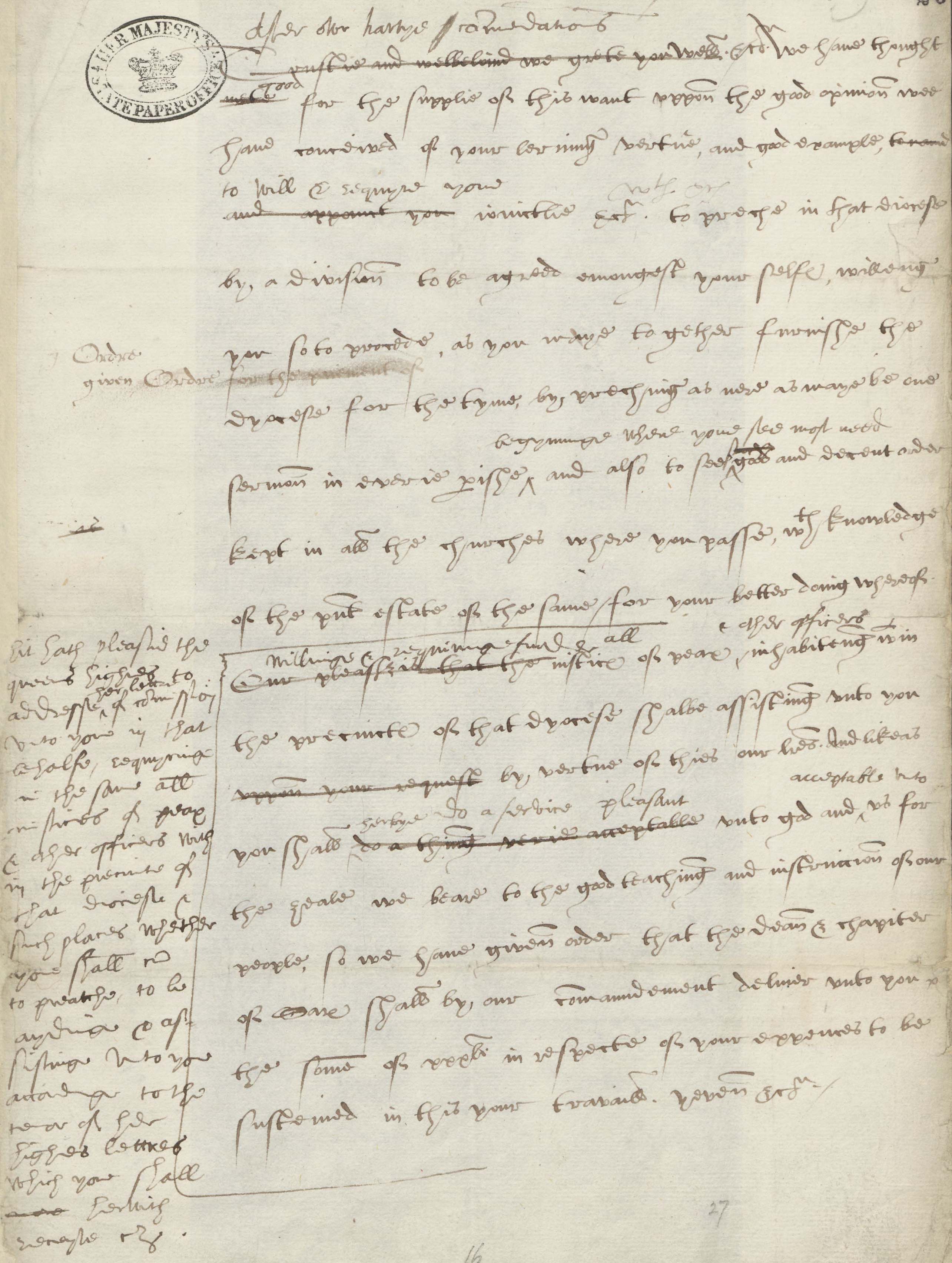 This is a rather messy draft of a letter written by Cardinal Pole but based on a draft order by the Queen (a corrected draft of which is catalogued immediately before this one).  It gives a rather different picture to the usual one of Catholic teaching, emphasising (as we have seen elsewhere) the importance of preaching in converting people back to Catholicism.

Trusty and well beloved we greet you well. After our hearty commendations  We have thought mete good for the supply of this want upon the good opinion we have conceived of our learning virtue and good example, to recommend and appoint you to will & require you jointly &c with &c to preach in that diocese [Salisbury] by a division to be agreed amongst yourself  [to divide the diocese up between them] willing you so to proceed, as you may together furnish [serve] the diocese for the time[1] by preaching as were as may be one sermon in every parish beginning where you see most need  and also to see such good and decent order kept in all the churches where you passe, with knowledge of the present estate of the same/ for your better doing whereof

Our pleasure is that … all justice of peace, & other officers inhabiting within the precincts of that diocese shall be assisting unto you upon your request by virtue of these our letters.  And like as you shall do a thing very acceptable here by do a service pleasant unto god and acceptable unto us for the zeal we bear to the good teaching and instruction of our people, so we have given order that the dean & chapter of Sarum [Salisbury] shall by our commandment deliver unto you the sum of £30 in respect of your expenses to be sustained in this your travail, given &c[2]

That it hath pleased the Queen’s highness to address her letters of commission unto you in that behalf, requiring in the same all justices of peace & other officers with in the precincts of that diocese & such places whether you shall come to preach to be aiding & assisting unto you according to the tenor of her highness’s letters which you shall <more> herewith receive &c

[1] At this point in the letter, but in a different hand is the following comment in the margin: Order/given Order for the payment of

[2] Given etc. i.e. that the standard closing, giving the date when the letter was written and the place where it was issues, should follow.