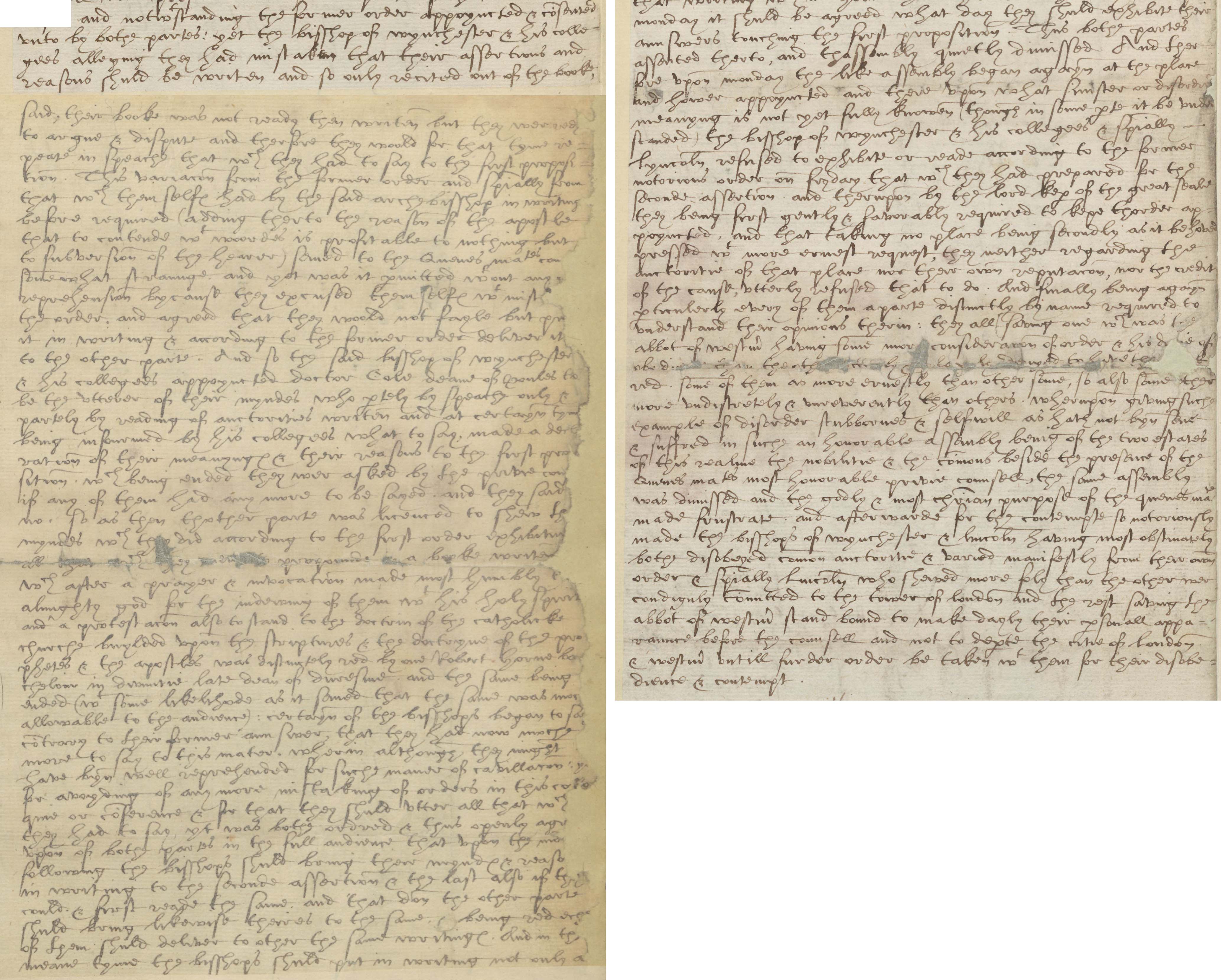 These are extracts from a report on the conference on religion, held during the Easter recess of Queen Elizabeth’s first Parliament.  A revised supremacy bill had passed the House of Commons before the recess but had been significantly revised by the Catholic-dominated Lords.  Part of the purpose of this conference was to put pressure on leading Catholics, especially the bishops in Parliament.  With two of their number subsequently imprisoned, six others daily reporting to the Privy Council and pressure put on leading members the Catholic nobility, a third supremacy bill, and the uniformity bill, were eventually passed after Easter.

… and notwithstanding the former order appointed & consented unto by both parties: yet the bishop of Winchester [John White] & his colleagues alleging they had mistaken that their assertions and reasons should be written and so only recited out of the book,

said, their book was not ready then written but they were ready to argue & dispute and therefore they would be for that time repeat in speech that which they had to say to the first proposition.  This variation from the former order and specially from that which themselves had by the said archbishop [John Heath, Archbishop of York] in writing before required (adding there to the reason of the apostle that to contend with words is profitable to nothing but to subversion of the hearer) seemed to be Queen’s majesty …[page damaged] somewhat strange and yet was it permitted without any [page damaged] reprehension because they excused themselves with just [page damaged] the order: and agreed that they would not fail but put it in writing & according to the former order deliver it [page damaged] to the other party [other side].  And so the said bishop of Winchester & his colleagues appointed doctor Cole, Dean of Paul’s [Henry Cole of St Paul’s Cathedral] to be the utterer of their minds who partly by speech only & partly by reading of authorities written and at certain times being informed by his colleagues what to say, made a declaration of their meanings & their reasons to the first proposition, which being ended they were asked by the Privy council if any of them had any more to be said and they said no, so as then the other party was licensed to show their minds which they did according to the first order exhibiting all that which they [page damaged] propound in a book written which after a prayer & invocation made most humbly to almighty god for the instructing of them with his holy spirit and a protestation also to stand to the doctrine of the catholic church[1] built upon the scriptures & the doctrine of the prophets & the apostles was distinctly read by one Robert Horne, bachelor in divinity, late dean of Durham[2] and the same being ended (with some likelihood as it seemed that the same was [more] allowable to the audience)[3]: Certain of the bishops began to say contrary to their former answer that they had now much more to say to this matter, wherein in although they might have been well reprehended for such manner of cavillation [unfair objections, quibbling]: [yet] for avoiding of any more mistaking of orders in this colloquy [meeting to settle differences of doctrine] or conference & for that they should utter all that which they had to say, it was both ordered & thus openly agreed upon of both parties in the full audience that upon the [morning] following the bishops should bring their minds & reasons in writing to the second assertion & the last also if they could & first read the same and that done, the other party should bring likewise theirs to the same & being read each of them should deliver to other the same writings …

… And therefore upon Monday the like assembly began again at the place and however appointed and there upon what sinister or disordered meaning is not yet fully known (though in some party it be understood) the Bishop of Winchester & his colleagues & specially Lincoln [Thomas Watson, bishop of Lincoln] refused to exhibit or read according to the former notorious order on Friday that which they had prepared for the second assertion and thereupon by the Lord keeper of the Great Seal [Nicholas Bacon] they being first gently & favourably required to keep the order appointed, and that taking no place being secondly as it behoved [necessary] pressed with more earnest request, they neither regarding the authority of that place nor their own reputation, not the credit of the cause, utterly refused that to do.  And finally being again particularly every of them a party distinctly by name required to understand their opinions there in: they all (saving one which was the abbot of Westminster [John Feckenham] having some more consideration of order & his duty of obedience than the others [damaged document] by denied to leave the [damaged document] read some of them as more earnestly than others, also some there more indiscreetly & irreverently than others,  whereupon giving such example of disorder stubbornness & self-will as hath not been seen & suffered in such an honourable assembly being of the two estates of this realm the nobility & the commons beside the presence of the Queen’s majesty’s most honourable privy council, the same assembly was dismissed and the godly & most Christian purpose of the Queen’s majesty made frustrate [frustrated]: and afterward for the contempt so notoriously made the bishops of Winchester & Lincoln having most obstinately both disobeyed common authority & varied [digressed] manifestly from their own order & specially Lincoln who shewed more folly than the other were conditionally committed to the Tower of London and the rest, saving the abbot of Westminster, stand bound to make daily their personal appearance before the council and not to depart the city of London & Westminster until further order be taken with them for their disobedience & contempt.

[Signed by Bacon, Shrewsbury, Bedford, Pembroke, Clinton, Knollys, Cecil and one other whose signature is unclear]

[1] This does not mean the Roman Catholic Church but the early Christian church.

[2] For other references to Horne, see Northumberland’s letter to Cecil (SP10/15/66) in this collection

[3] Members of the nobility and House of Commons were allowed to watch the debates.  This aside suggests that the arguments put forward by the Protestants were more popular with the audience.