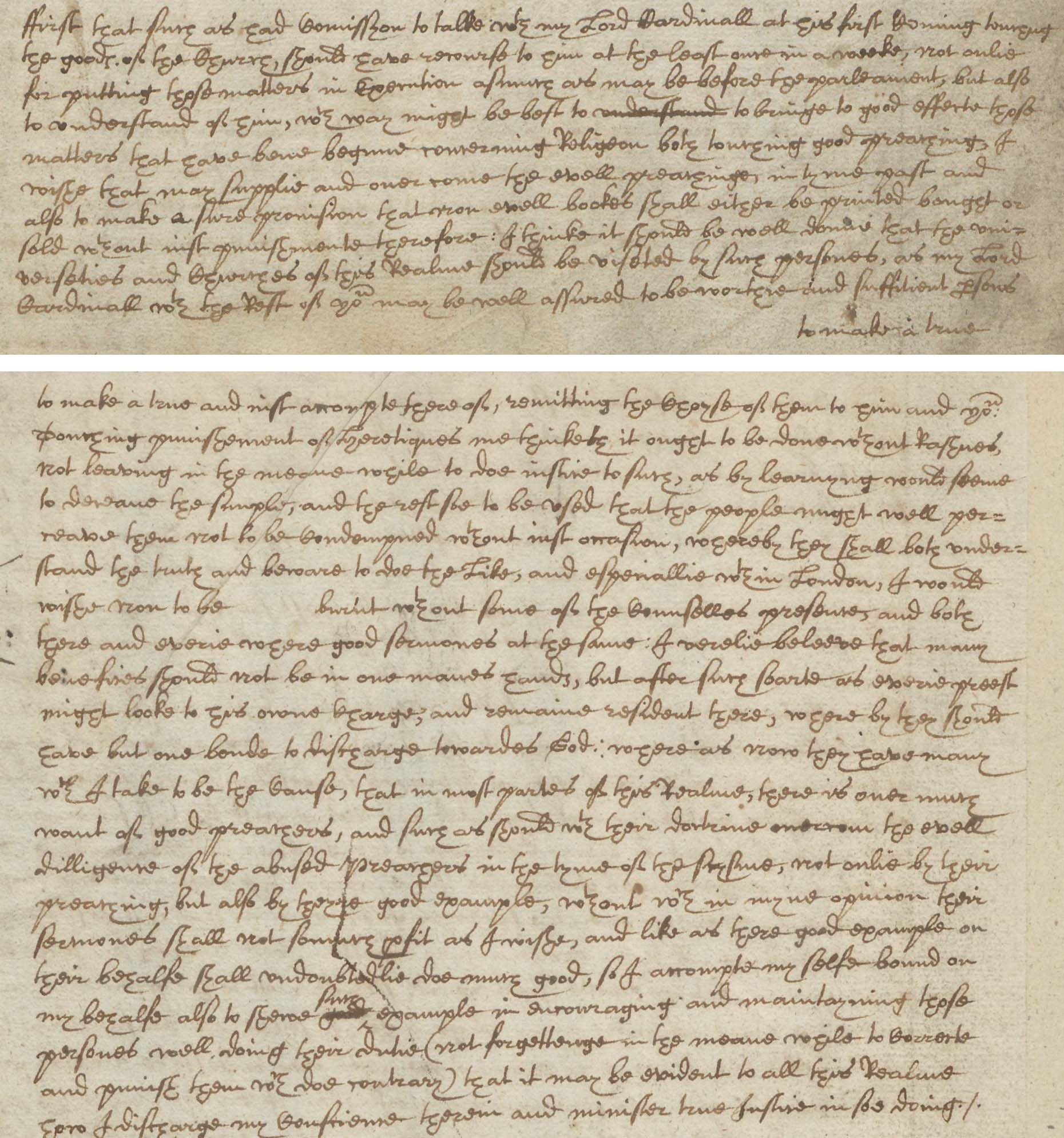 This is a 17th-century copy of a note of direction Mary gave to her council.  Near-contemporary copies, made for a number of reasons, are very useful for plugging gaps in the collection where material has been lost or is held in another archive.  These directions give a good sense of Mary’s priorities, how she intended to reconvert people, the ‘damage’ she felt had been done by Protestants, and her strategy for burning ‘heretics’.  Note also the emphasis on preaching; although commonly associated with Protestantism, preaching was a well-established practice in the Catholic Church too.

First that such as head Commission to talk with my Lord Cardinal [Cardinal Pole] at his first coming touching the goods of the Church, should have recourse to him at the least once in a week, not only for putting those matters in execution as much as may be before the parliament, but also to understand of him, which way might be best to understand to bring to good effect those matters that have been begun concerning religion both touching good preaching, I wish that may supply and overcome the evil preaching in time past and also to make a sure provision that non evil books shall either be printed brought or sold without just punishment therefore: I think it should be well done that the universities and churches of this realm should be visited[1] by such persons, as my Lord Cardinal with the rest of you may be well assured to be worthy and sufficient persons

to make a true and just account thereof, remitting the choice of them to him and you. Touching punishment of heretics me thinketh it ought to be done without rashness, not leaving in the meanwhile to do justice to such, as by learning would seem to deceive the simple, and the rest so to be used that the people might well perceive them not to be condemned without just occasion, whereby they shall not understand the truth and beware to do the like, and especially within London, I would wish none to be burnt without some of the councils presences, and both there and everywhere good sermons at the same: I verily believe that many benefices should not be in one man’s hands, but after such sort as every priest might look to his own charge, and remain resident there, whereby they should have but one bond to discharge towards God.  Where as now they have many which I take to be the cause, that in most parts of this realm, there is over much want of good preachers, and such as should with their doctrine overcome the evil diligence of the abused preachers in the time of the schism,[2] not only by their preaching, but also by their good example, without which in mine opinion their sermons shall not so much profit as I wish, and like as there good example on their behalf shall undoubtedly do much good, so I account myself bound on my behalf also to show god such example in encouraging and maintaining those persons well doing their duty (not forgetting in the meanwhile to correct and punish them which do contrary) that it may be evidence to all this realm how I discharge my conscience therein and minister true justice in so doing.

[1] visited.  Visitations, conducted by archbishops, bishops or archdeacons, were regularly held.  Their purpose was to check that minister, curates and lecturers were suitably qualified and held their living legitimately, and to check that the parish abided by all the laws and royal injunctions (for example, under Edward VI they would check that the parish had a Book of Common Prayer).

[2] schism i.e. between the Break with Rome and Mary’s reign.