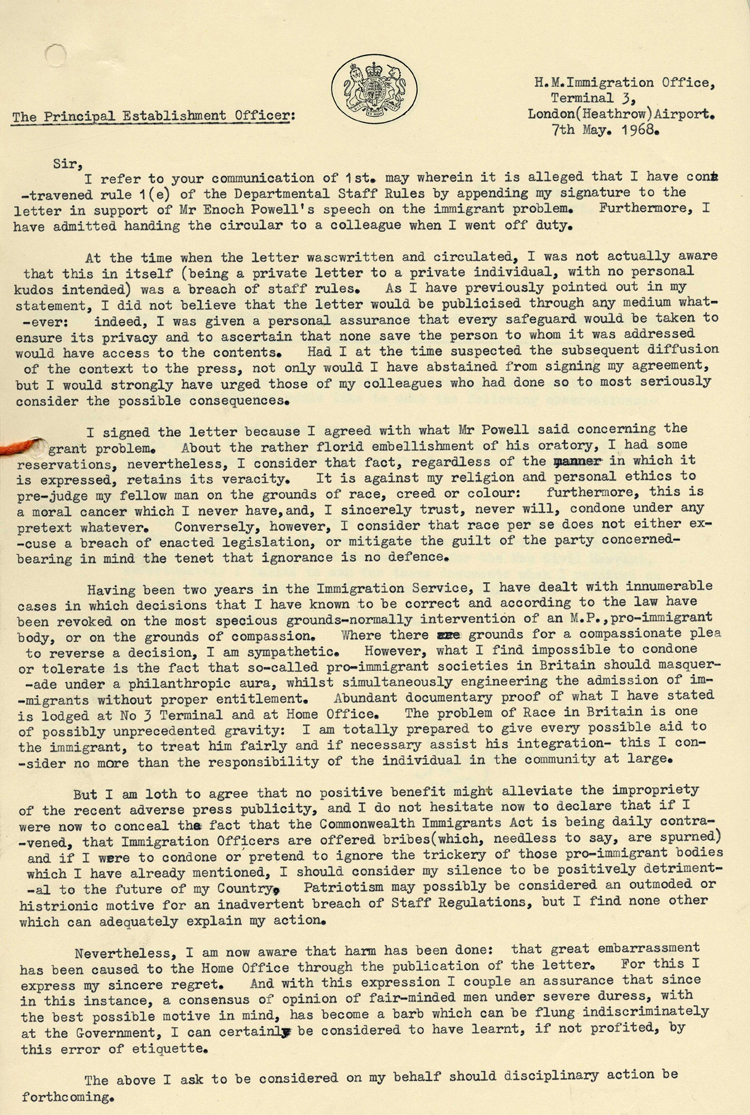 I refer to your communication of 1st may wherein it is alleged that I have contravened rule 1(e) of the Departmental Staff Rules by appending my signature to the letter in support of Mr Enoch Powell’s speech on the immigrant problem. Furthermore, I have admitted handing the circular to a colleague when I went off duty.

At the time when the letter was written and circulated, I was not actually aware that this in itself (being a private letter to a private individual, with no personal kudos intended) was a breach of staff rules. As I have previously pointed out in my statement, I did not believe that the letter would be publicised through any medium whatever: indeed, I was given a personal assurance that every safeguard would be taken to ensure its privacy and to ascertain that none save the person to whom it was addressed would have access to the contents. Had I at the time suspected the subsequent diffusion of the context to the press, not only would I have abstained from signing my agreement, but I would strongly have urged those of my colleagues who had done so to most seriously consider the possible consequences.

I signed the letter because I agreed with what Mr Powell said concerning the immigrant problem. About the rather florid embellishment of his oratory, I had some reservations, nevertheless, I consider that fact, regardless of the manner in which it is expressed, retains its veracity. It is against my religion and personal ethics to pre-judge my fellow man on the grounds of race, creed or colour: furthermore, this is a moral cancer which I never have, and, I sincerely trust, never will, condone under any pretext whatever. Conversely, however, I consider that race per se does not either excuse a breach of enacted legislation, or mitigate the guilt of the party concerned – bearing in mind the tenet that ignorance is no defence.

Having been two years in the Immigration Service, I have dealt with innumerable cases in which decisions that I have known to be correct and according to the law have been revoked on the most specious grounds – normally intervention of an M.P., pro-immigrant body, or on the grounds of compassion. Where there are grounds for a compassionate plea to reverse a decision, I am sympathetic. However, what I find impossible to condone or tolerate is the fact that so-called pro-immigrant societies in Britain should masquerade under a philanthropic aura, whilst simultaneously engineering the admission of immigrants without proper entitlement. Abundant documentary proof of what I have stated is lodged at No 3 Terminal and at Home Office. The problem of Race in Britain is one of possibly unprecedented gravity; I am totally prepared to give every possible aid to the immigrant, to treat him fairly and if necessary assist his integration – this I consider no more than the responsibility of the individual in the community at large.

But I am loth to agree that no positive benefit might alleviate the impropriety of the recent adverse press publicity, and I do not hesitate now to declare that if I were now to conceal the fact that the Commonwealth Immigrants Act is being daily contravened, that Immigration Officers are offered bribes (which, needless to say, are spurned) and if I were to condone or pretend to ignore the trickery of those pro-immigrant bodies which I have already mentioned, I should consider my silence to be positively detrimental to the future of my Country. Patriotism may possibly be considered an outmoded or histrionic motive for an inadvertent breach of Staff Regulations, but I find none other which can adequately explain my action.

Nevertheless, I am now aware that harm has been done: that great embarrassment has been caused to the Home Office through the publication of the letter. For this I express my sincere regret. And with this expression I couple an assurance that since in this instance, a consensus of opinion of fair-minded men under severe duress, with the best possible motive in mind, has become a barb which can be flung indiscriminately at the Government, I can certainly be considered to have learnt, if not profited, by this error of etiquette.

The above I ask to be considered on my behalf should disciplinary action be forthcoming.