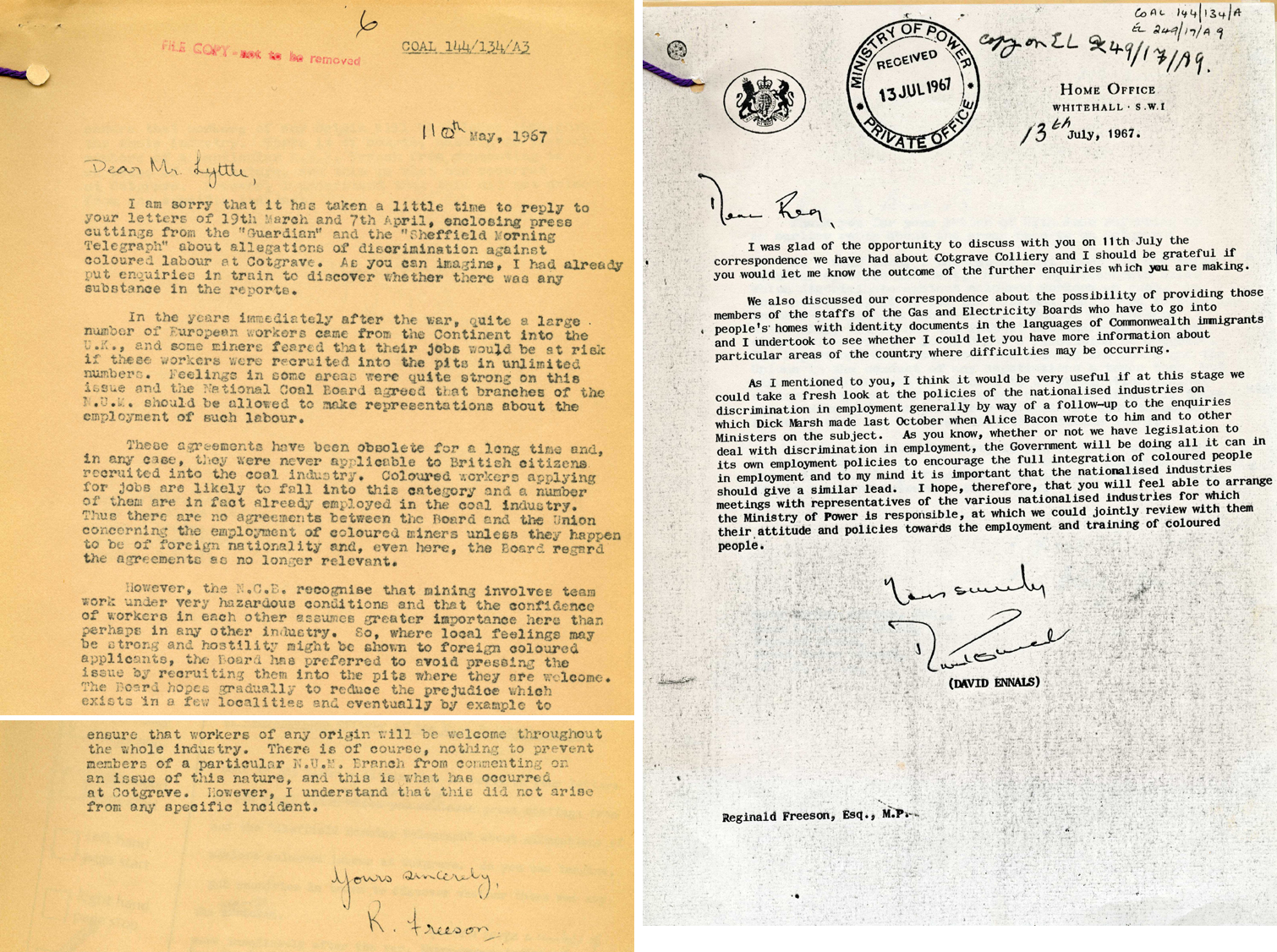 Correspondence between the Ministry of Power, Race Relations Board and Home Office, 1967 (POWE 52/199)

I am sorry that it has taken a little time to reply to your letters of 19th March and 7th April, enclosing press cuttings from the “Guardian” and the “Sheffield Morning Telegraph” about allegations of discrimination against coloured labour at Cotgrave. As you can imagine, I had already put enquiries in train to discover whether there was any substance in the reports.

In the years immediately after the war, quite a large number of European workers came from the Continent into the U.K., and some miners feared that their jobs would be at risk if these workers were recruited into the pits in unlimited numbers. Feelings in some areas were quite strong on this issue and the National Coal Board agreed that branches of the N.U.M. should be allowed to make representations about the employment of such labour.

These agreements have been obsolete for a long time and, in any case, they were never applicable to British citizens recruited into the coal industry. Coloured workers applying for jobs are likely to fall into this category and a number of them are in fact already employed in the coal industry. Thus there are no agreements between the Board and the Union concerning the employment of coloured miners unless they happen to be of foreign nationality and, even here, the Board regard the agreements as no longer relevant.

However, the N.C.B. recognise that mining involves team work under very hazardous conditions and that the confidence of workers in each other assumes greater importance here than perhaps in any other industry. So, where local feelings may be strong and hostility might be shown to foreign coloured applicants, the Board has preferred to avoid pressing the issue by recruiting them into the pits where they are welcome. The Board hopes gradually to reduce the prejudice which exists in a few localities and eventually by example to ensure that workers of any origin will be welcome throughout the whole industry. There is of course, nothing to prevent members, of a particular N.U.M. Branch from consenting on an issue of this nature, and this is what has occurred at Cotgrave. However, I understand that this did not arise from any specific incident.

I was glad of the opportunity to discuss with you on 11th July the correspondence we have had about Cotgrave Colliery and I should be grateful if you would let me know the outcome of the further enquiries which you are making.

We also discussed our correspondence about the possibility of providing those members of the staffs of the Gas and Electricity Boards who have to go into people’s homes with identity documents in the languages of Commonwealth Immigrants and I undertook to see whether I could let you have more information about particular areas of the country where difficulties may be occurring.

As I mentioned to you, I think it would be very useful if at this stage we could take a fresh look at the policies of the nationalised industries on discrimination in employment generally by way of a follow-up to the enquiries which Dick Marsh made last October when Alice Bacon wrote to him and to other Ministers on the subject. As you know, whether or not we have legislation to deal with discrimination in employment, the Government will be doing all it can in its own employment policies to encourage the full integration of coloured people in employment and to my mind it is important that the nationalised industries should give a similar lead. I hope, therefore, that you will feel able to arrange meetings with representatives of the various nationalised industries for which the Ministry of Power is responsible, at which we could jointly review with them their attitude and policies towards the employment and training of coloured people.