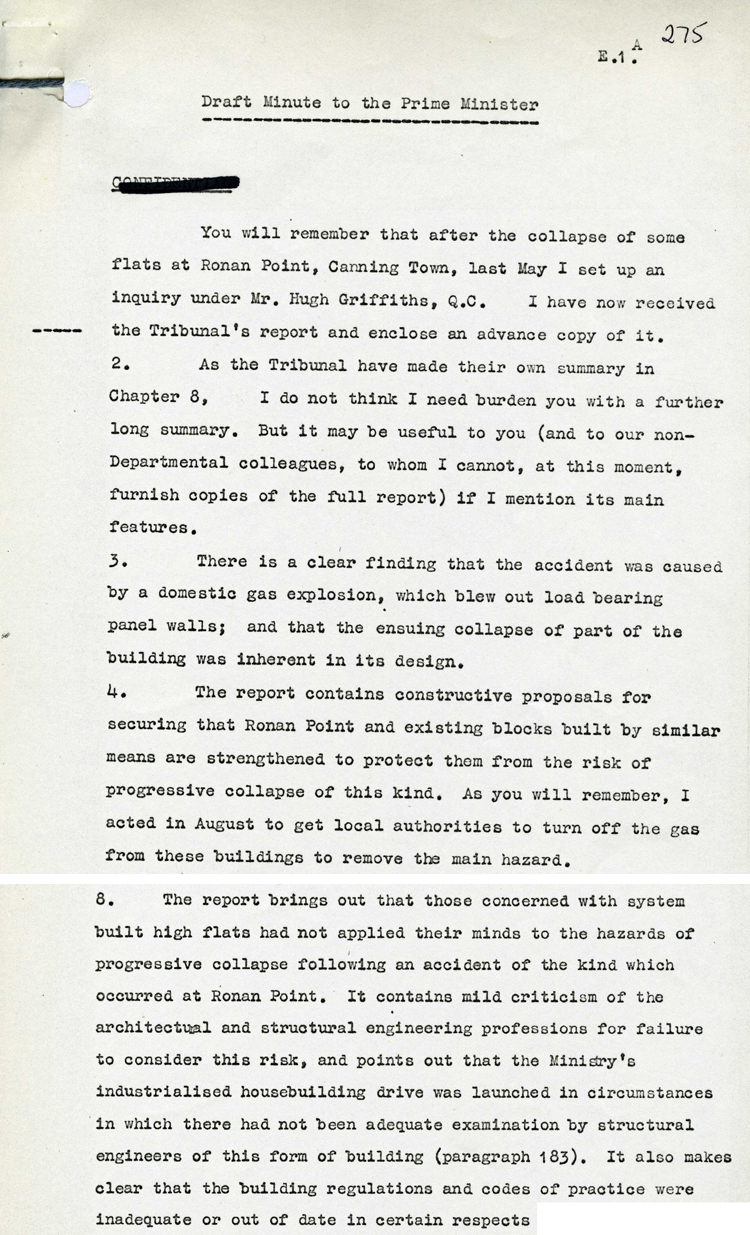 Notes for Prime Minister Harold Wilson relating to the inquiry on the collapse of the Ronan Point tower block, October 1968 (AT 54/54)

Draft Minute to the Prime Minister

You will remember that after the collapse of some flats at Ronan Point, Canning Town, last May I set up an inquiry under Mr. Hugh Griffiths, Q.C. I have now received the Tribunal report and enclose an advance copy of it.

2. As the Tribunal have made their own summary in Chapter 8, I do not think I need burden you with a further long summary. But it may be useful to you (and to our non- Departmental colleagues, to whom I cannot, at this moment, furnish copies of the full report) if I mention its main features.

3. There is a clear finding that the accident was caused by a domestic gas explosion, which blew out load bearing panel walls; and that the ensuing collapse of part of the building was inherent in its design.

4. The report contains constructive proposals for securing that Ronan Point and existing blocks built by similar means are strengthened to protect them from the risk of progressive collapse of this kind. As you will remember, I acted in August to get local authorities to turn off the gas from these buildings to remove the main hazard.

5. For the future there are recommendations for securing that new tall blocks of flats should be designed so as not to be susceptible to progressive collapse. These include proposals for strengthening the requirements of the building regulations, for which I am responsible, and for new and improved codes of building practice, which are the immediate concern of the British Standards Institution, but which are, in effect, incorporated in the Building Regulations as acceptable building practice.

8. The report brings out that those concerned with system built high flats had not applied their minds to the hazards of progressive collapse following an accident of the kind which occurred at Ronan Point. It contains mild criticism of the architectural and structural engineering professions for failure to consider this risk and points out that the Ministry’s industrialised house building drive was launched in circumstances in which there had not been adequate examination by structural engineers of this form of building (paragraph 183). It also makes clear that the building regulations and codes of practice were inadequate or out of date in certain respects (paragraphs 209 to 217).