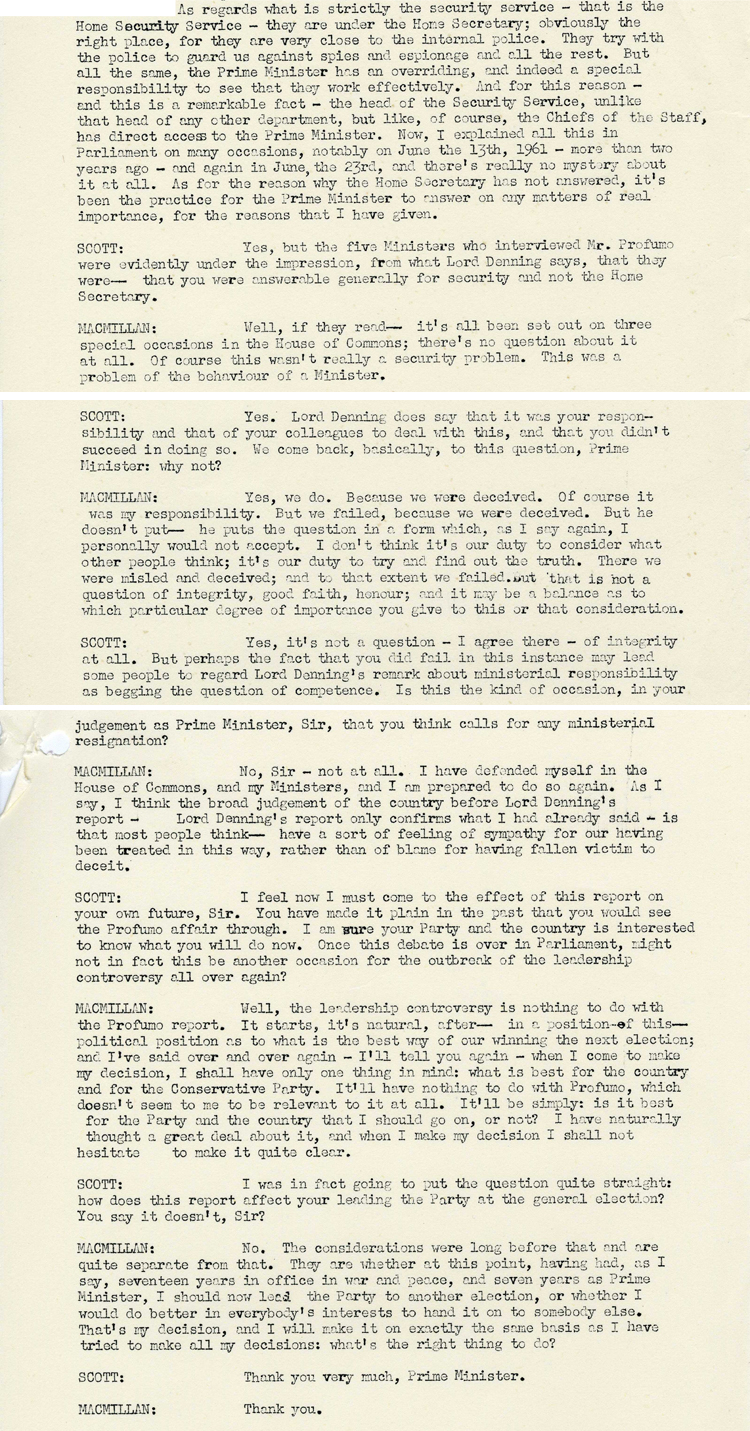 Extracts from a transcript of a telephone interview for the BBC Home Service with Harold Macmillan by Peter Hardiman Scott, 26th September, 1963. (DO 194/22)

MACMILLAN: ….. As regards what is strictly the security service – that is the Home Security Service – they are under the Home Secretary; obviously the right place, for they are very close to the internal police. They try with the police to guard us against spies and espionage and all the rest. But all the same, the Prime Minister has an overriding, and indeed a special responsibility to see that they work effectively. And for this reason- and this is a remarkable fact – the head of the Security Service, unlike that head of any other department, but like, of course, the Chiefs of the Staff, has direct access to the Prime Minister. Now, I explained all this in Parliament on many occasions, notably on June the 13th, 1961- more than two years ago – and again in June, the 23rd, and there’s really no mystery about it at all. As for the reason why the Home Secretary has not answered, it’s been the practice for the Prime Minister to answer on any matters of real importance, for the reasons that I have given.

SCOTT: Yes, but the five Ministers who interviewed Mr. Profumo [Secretary of State for War] were evidently under the impression, from what Lord Denning says, that they were – that you were answerable generally for security and not the Home Secretary.

MACMILLAN: Well, if they read— it’s all been set out on three special occasions in the House of Commons; there’s no question about it at all. Of course this wasn’t really a security problem. This was a problem of the behaviour of a Minister.
….

SCOTT: Yes. Lord Denning does say that it was your responsibility and that of your colleagues to deal with this, and that you didn’t succeed in doing so. We come back, basically, to this question, Prime Minister: why not?

MACMILLAN: Yes, we do. Because we were deceived. Of course it was my responsibility. But we failed, because we were deceived. But he doesn’t put- he puts the question in a form which, as I say again, I personally would not accept. I don’t think it’s our duty to consider what other people think; it’s our duty to try and find out the truth. There we were misled and deceived; and to that extent we failed. But that is not a question of integrity, good faith, honour; and it may be a balance as to which particular degree of importance you give to this or that consideration.

SCOTT: Yes, it’s not a question – I agree there – of integrity at all. But perhaps the fact that you did fail in this instance may lead some people to regard Lord Denning’s remark about ministerial responsibility as begging the question of competence. Is this the kind of occasion, in your judgement as Prime Minister, Sir, that you think calls for any ministerial resignation?

MCMILLAN: No, Sir – not at all. I have defended myself in the House of Commons, and my Ministers, and I am prepared to do so again. As I say, I think the broad judgement of the country before Lord Denning’s report only confirms what I had already said – is that most people think – have a sort of feeling of sympathy for our having been treated in this way, rather than of blame for having fallen victim to deceit.

SCOTT: I feel now I must come to the effect of this report on your own future, Sir. You have made it plain in the past that you would see the Profumo affair through. I am sure your Party and the country is interested to know what you will do now. Once this debate is over in Parliament, might not in fact this be another occasion for the outbreak of the leadership controversy all over again?

MACMILLAN: Well, the leadership controversy is nothing to do with the Profumo report. It starts, it’s natural, after- in a position- of this political position as to what is the best way of our winning the next election; and I’ve said over and over again – I’ll tell you again – when I come to make my decision, I shall have only one thing in mind: what is best for the country and for the Conservative Party. It’ll have nothing to do with Profumo, which doesn’t seem to me to be relevant to it at all. It’ll be simply: is it best for the Party and the country that I should go on, or not? I have naturally thought a great deal about it, and when I make my decision I shall not hesitate to make it quite clear.

SCOTT: I was in fact going to put the question quite straight: how does this report affect your leading the Party at the general election? You say it doesn’t, Sir?

MACMILLAN: No. The considerations were long before that and are quite separate from that. They are whether at this point, having had, as I say, seventeen years in office in war and peace, and seven years as Prime Minister, I should now lead the Party to another election, or whether I would do better in everybody’s interests to hand it on to somebody else. That’s my decision, and I will make it on exactly the same basis as I have tried to make all my decisions: what’s the right thing to do?