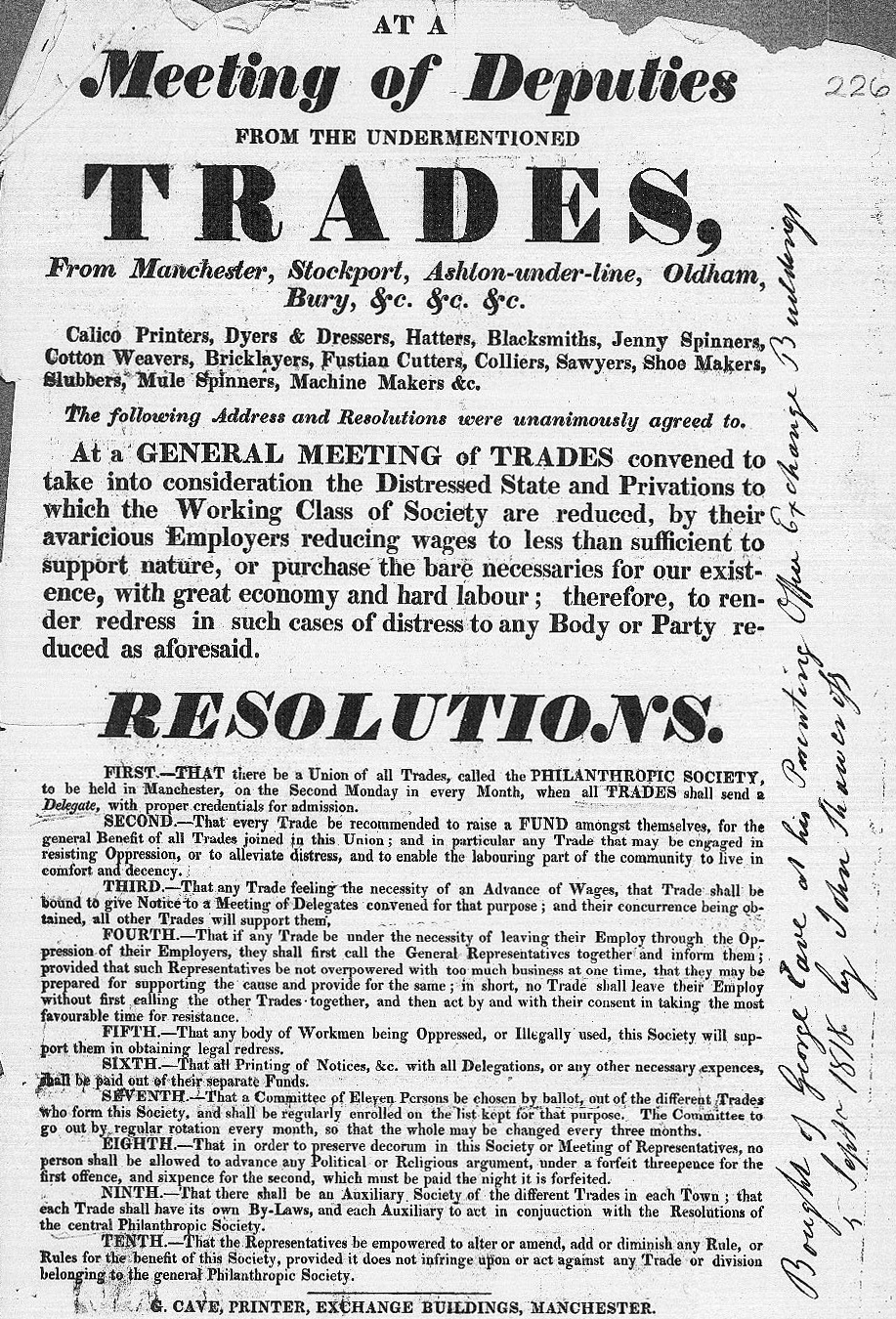 At a meeting of Deputies from the under-mentioned TRADES from Manchester, Stockport, Ashton-under-Lyne. Oldham. Bury, &c. &c. &c.

At a general meeting of trades convened to take into consideration the distressed state and privations to which the working class of society are reduced by their avaricious employers reducing wages to less than sufficient to support nature or purchase the bare necessaries for our existence, with great economy and hard labour; therefore, to render redress in such cases of distress to anybody or party reduced as aforesaid,

First. That there be a Union of all Trades called the PHILANTHROPIC SOCIETY to be held in Manchester on the second Monday in every month, when all TRADES shall send a ‘Delegate‘ with proper credentials for admission.

Second. That every trade be recommended to raise a FUND amongst themselves for the general benefit of all trades joined in this Union, and in particular any trade that may be engaged in resisting oppression, or to alleviate distress, and to enable the labouring part of the community to live in comfort and decency.

Third. That any trade feeling the necessity of an advance of wages, that trade shall be bound to give notice to a meeting of delegates convened for that purpose; and their concurrence being obtained, all other trades will support them.

Fourth. That if any trade be under the necessity of leaving their employ through the oppression of their employers, they shall first call the general representatives together and inform them, provided that such representatives be not overpowered with too much business at one time, that they may be prepared for supporting the cause and provide for the same; in short, no trade shall leave their employ without first calling the other trades together, and then act by and with their consent in taking the most favourable time for resistance.

Fifth. That any body of workmen being oppressed or illegally used, this Society will support them in obtaining legal redress.

Sixth. That all printing of notices, &c. with all delegations, or any other necessary expenses, shall be paid out of their separate funds.

Seventh. That a Committee of eleven persons be chosen by ballot, out of the different trades who form this Society, and shall be regularly enrolled on the list kept for that purpose. The Committee to go out by regular rotation every month, so that the whole may be changed every three months.

Eighth. That in order to preserve decorum in this Society or meeting of representatives, no person shall be allowed to advance any political or religious argument, under a forfeit of 3d. for the first offence, and 6d. for the second, which must be paid the night it is forfeited.

Ninth. That there shall be an Auxiliary Society of the different trades in each town; that each trade shall have its own by-laws, and each auxiliary to act in conjunction with the Resolutions of the central Philanthropic Society.

Tenth. That the representatives be empowered to alter or amend, add or diminish any Rule or Rules for the benefit of this Society, provided it does not infringe upon or act against any trade or division belonging to the general Philanthropic Society.