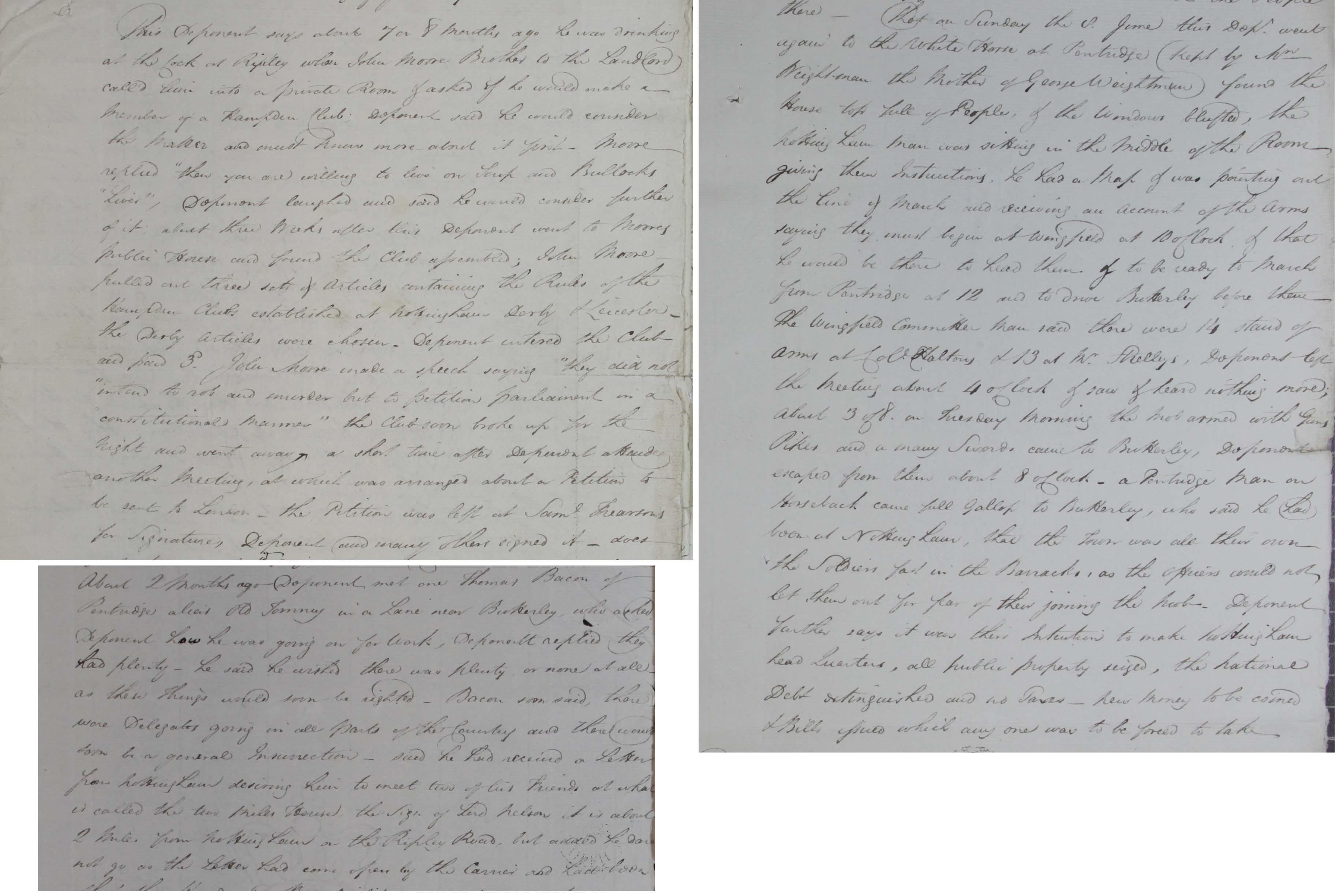 Extracts from the deposition of John Cope from Ripley, one of the captured radicals involved in the Pentrich Rising, 15 June 1817. In his testimony he claimed to have left the mob by the time it reached Derbyshire. (HO 40/9/ f597-601)

This Deponent says about 7 or 8 months ago he was drinking at the Cock at Ripley when John Moore, brother of the Landlord, called him into a private room and asked if he would make a member of a Hampden Club. Deponent said he would consider the matter and must know more about it first. Moore replied ‘then you are willing to live on soup and Bullock’s liver’. Deponent laughed and said he would consider further of it; about three weeks after this, Deponent went to Moore’s public House and found the Club assembled; John Moore pulled out three sets of Articles containing the Rules of the Hampden Clubs established at Nottingham, Derby and Leicester – the Derby Articles were chosen. Deponent entered the Club and paid 3d (pennies). John Moore made a speech saying ‘they did not intend to rob and murder but to petition parliament in a constitutional manner’. The Club soon broke up for the night and went away. A short time after, Deponent attended another meeting, at which was arranged about a Petition to be sent to London – the Petition was left at Samuel Thearson’s for signatures, Deponent and many others signed it…

… About two months ago Deponent met one Thomas Bacon of Pentridge alias Old Tommy in a lane near Butterley, who asked Deponent how he was going on for work. Deponent replied they had plenty – he said he wished there was plenty or none at all as these things would soon be righted. Bacon soon said there were Delegates going in all parts of the country and there would soon be a general insurrection – said he had received a letter from Nottingham desiring him to meet two of his friends at what is called the Two Miles House, the sign of Lord Nelson, it is about 2 miles from Nottingham on the Ripley Road, but added he dare not go as the letter had come open by the carrier…

… That on Sunday the 5th June this Deponent went again to the White Horse at Pentridge (kept by Mrs Weightman, the mother of George Weightman) found the house top full of people and the windows closed, the Nottingham man was sitting in the middle of the room giving them instructions, he had a map and was pointing the line of the march and receiving an account of the arms saying they must begin at Wingfield at 10’ o clock and that he would be there to head them. And to be ready to march from Pentridge at 12 and to drive Butterley before them. The Wingfield Committee man said there were 14 stand of arms [complete set of weapons for one man] at… and 13 at Mr. Shelley’s. Deponent left the meeting about 4’ o clock and saw and heard nothing more. About 3 of 8 on Tuesday morning the mob armed with guns, pikes and many swords, came to Butterley. Depondent escaped from them about 8 o’clock – a Pentridge man on horseback came full gallop to Butterely, who said he had been at Nottingham, that the town was all their own, the soldiers fast in the barracks, as the officers could not let them out for fear of their joining the mob. Deponent further says it was their intentions to make Nottingham head quarters, all public property seized, the National Debt extinguished and no taxes – new money to be coined and bills issued which anyone was to be freed to take.