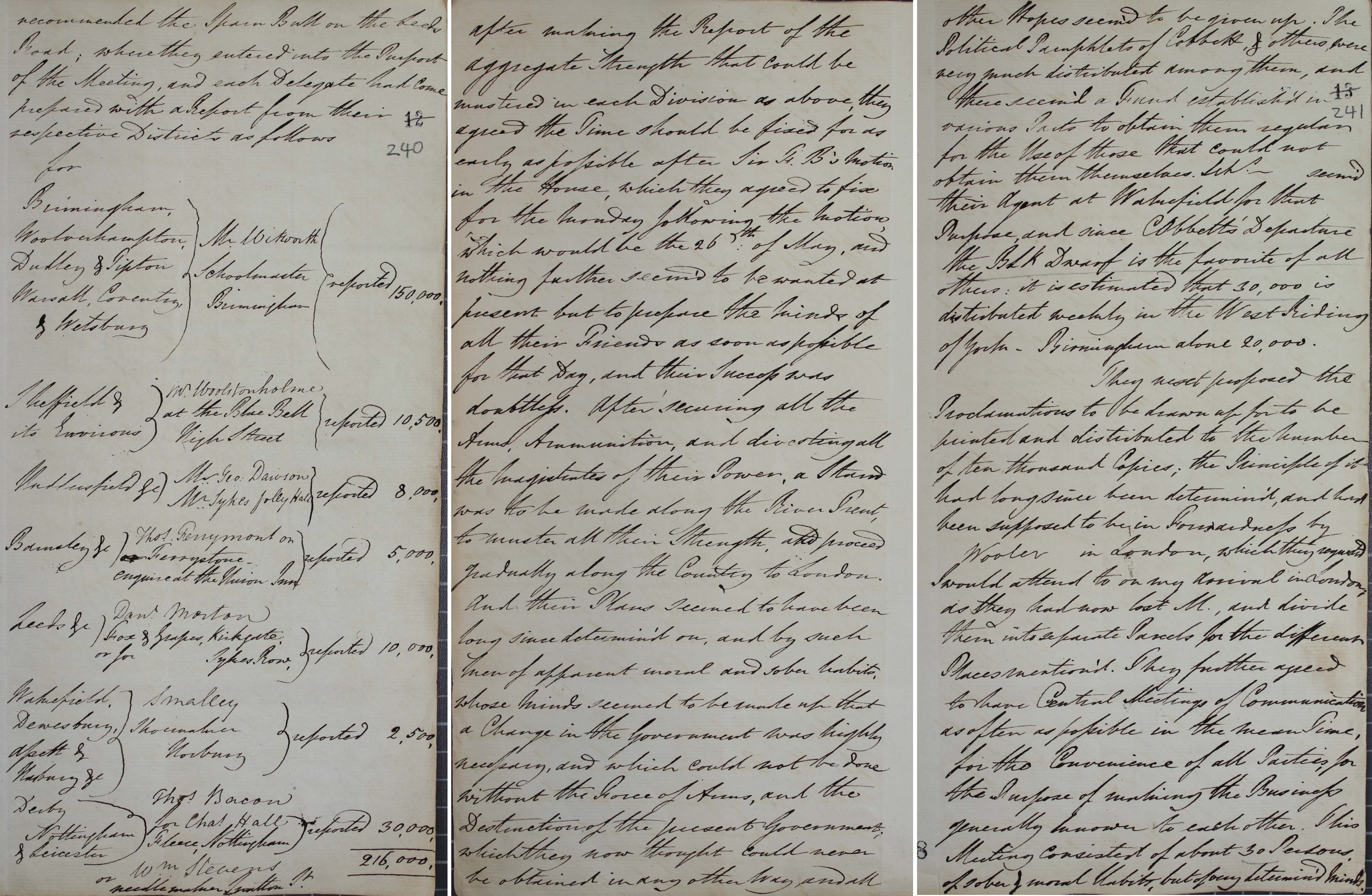 Extract from a written account by ‘Oliver Spy’, the main government provocateur in the Pentrich Rising in June 1817. He described his visits to various radical meetings and what he heard. This extract includes details of the strength of support and the importance of the radical press for context of the Pentrich rising. The figures were probably fanciful and possibly encouraged by Oliver. He did not report his own claims about large numbers being ready in London to rise with them, which were the vital link in the chain. However, he falsely sought to implicate Cobbett in the rising by claiming that Cobbett ran some kind of ‘fund’ for sedition. (HO 40/9/ f 240-241)

Recommended the Spain Bull on the Leek Road, where they entered into the purport of the meeting, and each Delegate had come prepared with a Report from their respective Districts as follows:

After making the Report of the aggregate strength that could be mustered in each Division as above, they agreed the time should be fixed for as early as possible after Sir F. B.’s [Francis Burdett] motion in the House, which they agreed to fix for the Monday following the motion which would be 26th of May, and nothing further seemed to be wanted at present but to prepare the minds of all their friends as soon as possible for that day, and their success was doubtless. After securing all the arms, ammunition and divesting all the magistrates of their power, a stand was to be made along the River Trent, to muster all their strength, and proceed gradually along the county to London. And their plans seemed to have been long since determined on and by such men of apparent moral and sober habits whose minds seemed to be made up that a change in the Government was highly necessary, and which could not be done without the Force of Arms, and the Destruction of the present Government which they now thought could never be obtained in any other way and all other hopes seemed to be given up. The political Pamphlets of Cobbett and others were very much distributed among them, and there seemed a Fund established in various parts to obtain them regular for the use of those that could not obtain them themselves… seemed their Agent at Wakefield for that purpose, and since Cobbett’s departure the ‘Black Dwarf’ is the favourite of all others: it is estimated that 30,000 is distributed weekly in the West Riding of Yorkshire, Birmingham alone 20,000.

They next propose the Proclamations to be drawn up for to be printed and distributed to the number of ten thousand copies, the principle of it had long since been determined, and had been supposed to be in readiness by Wooler [publisher of ‘Black Dwarf’] in London, which they requested I would attend to on my arrival in London as they had now lost M. and divided them into separate parcels for the different places intentioned. They further agreed to have Central meetings of communication as often as possible in the meantime for the convenience of all parties for the purpose of making the business generally known to each other. This meeting consisted of about thirty persons of sober and moral habits, but of very determined minds.