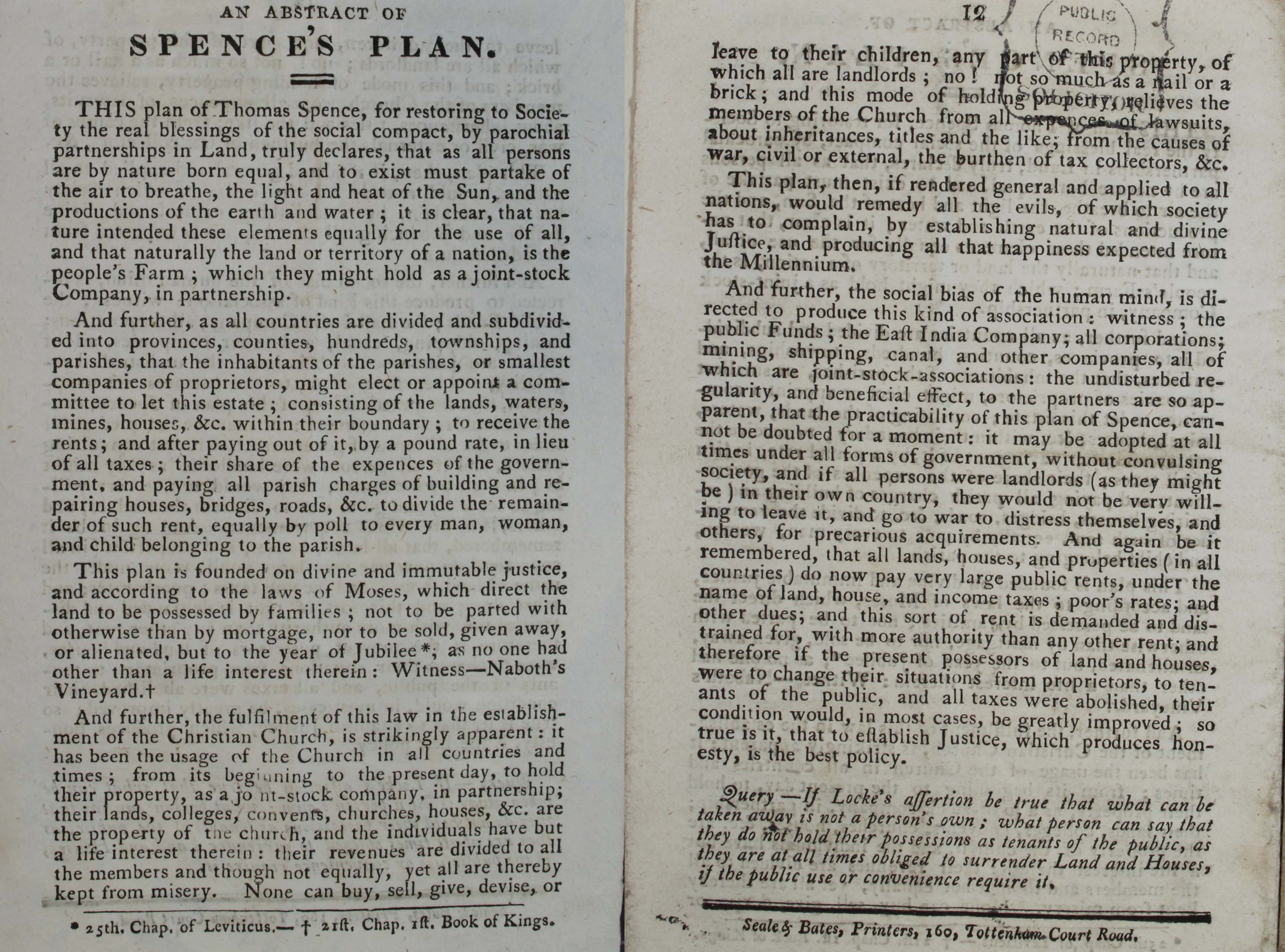 Extract from a Spencean Philanthropist Society pamphlet stating its principles. Their ultimate goal was the redistribution of wealth through land reform, which sat awkwardly with the tactic of Arthur Thistlewood’s group of the Spenceans who favoured armed insurrection. (TS 11/199)

AN ABSTRACT OF SPENCE’S PLAN
THIS plan of Thomas Spence, for restoring to Society the real blessings of the social compact, by parochial partnerships in Land, truly declares, that all persons are by nature born equal, and to exist must partake of the air to breathe, the light and the heat of the sun, and the productions of the earth and water; it is clear, that nature intended these elements equally for the use of all, and that naturally the land or territory of a nation, is the people’s Farm; which they might hold as a joint-stock Company in partnership.

And further, as all countries are divided and subdivided into provinces, counties, hundreds, townships and parishes, that the inhabitants of the parishes, or smallest companies of proprietors, might elect or appoint a committee to let this estate; consisting of the lands, waters, mines, houses etc within their boundary; to receive the rents; and after paying out of it, by a pound rate, in lieu of all taxes, their share of the expenses of government, and paying all parish charges of building and repairing houses, bridges, roads, etc, to divide the remainder of such rent, equally by poll to every man, woman and child belonging to the parish.

This plan is founded on divine and immutable justice, and according to the laws of Moses, which direct the land to be possessed by families; not to be parted with otherwise than by mortgage, nor to be sold, given away, or alienated, but to the year of Jubilee [25th Chap. of Leviticus], as no one had other than a life interest therein: Witness – Naboth’s Vineyard [21st Chap.1st Book of Kings].

And further, the fulfilment of this law in the establishment of the Christian Church, is strikingly apparent: it has been the usage of the Church in all countries and times; from its beginning to the present day, to hold their property, as a joint-stock company, in partnership, their lands, colleges, convents, churches, houses, etc, are the property of the church, and the individuals have but a life interest in therein: their revenues are divided to all the members and though not equally, yet all are thereby kept from misery. None can buy, sell, give, devise, or leave to their children, any part of this property, of which all are landlords; no! not so much as a nail or a brick; and this mode of holding property relieves the members of the Church from all expenses of lawsuits, about inheritances, titles and the like; from causes of war, civil or external, the burthen of tax collectors, etc.

This plan, then, if rendered general and applied to all nations, would remedy all the evils, of which society has to complain, by establishing natural and divine Justice, and producing all the happiness expected from the Millennium.

And further, the social bias of the human mind, is directed to produce this kind of association; witness; the public Funds; the East India Company; all corporations; mining, shipping, canal and other companies, all of which are joint-stock associations; the undisturbed regularity, and beneficial effect, to the partners are so apparent, that the practicability of this plan of Spence, cannot be doubted for a moment; it may be adopted at all times under all forms of government, without convulsing society, and if all persons were landlords (as they might be) in their own country, they would not be very willing to leave it, and go to war to distress themselves, and others, for precarious acquirements. And again be it remembered, that all lands, houses, and properties (in all countries) do now pay very large public rents, under the name of land, house and income taxes; poor’s rates; and other dues; and this sort of rent is demanded and distrained for, with more authority than any other rent; and therefore if the present possessors of land and houses, were to change their situations from proprietors, to tenants of the public, and all taxes were abolished, their condition would, in most cases, be greatly improved; so true is it, that to establish Justice, which produces honesty, is the best policy.

Query – If Locke’s assertion be true that what can be taken away is not a person’s own; what person can say that they do not hold their possessions as tenants of the public, as they are at all times obliged to surrender Land and Houses, if the public use or convenience require it.