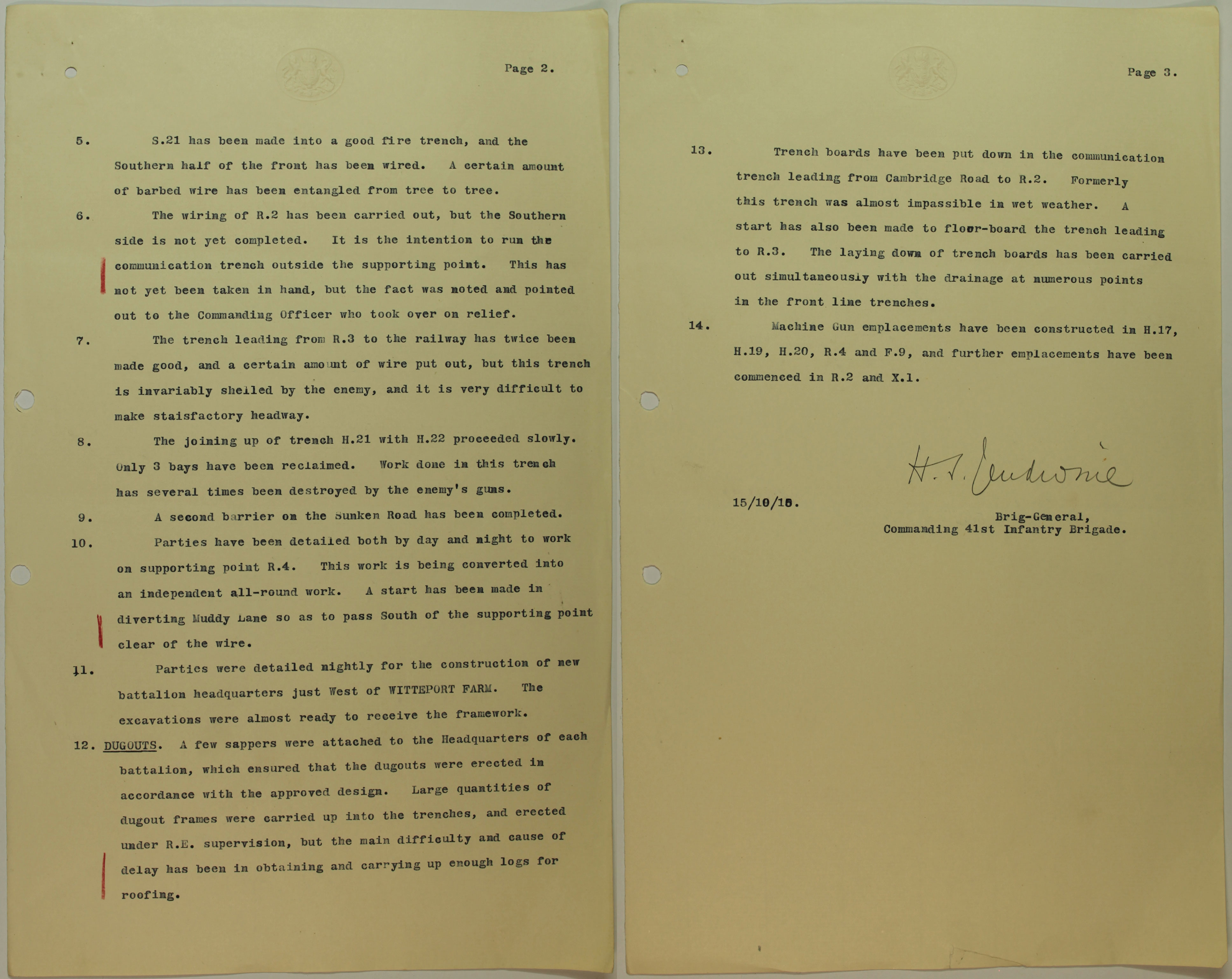 Extract from a Progress report from the commander of 41st Infantry Brigade describing how the trenches which they have recently taken over were being reconstructed and improved, 15 October 1916 (Catalogue ref: WO95/1864)

5. 21 [Map reference] has been made into a food fire trench, and the Southern half of the front has been wired. A certain amount of barbed wire has been entangled from tree to tree.

6. The wiring of R.2 has been carried out, but the Southern side is not yet completed. It is the intention to run the communication trench outside the supporting point. This has not yet been taken in hand, but the fact was noted and pointed out to the Commanding Officer who took over on relief.

7. The trench leading from R.3 to the railway has twice been made good, and a certain amount of wire put out, but this trench is invariably shelled by the enemy, and it is very difficult to make satisfactory headway.

8. The joining up of trench H.21 with H.22 proceeded slowly. Only 3 bays have been reclaimed. Work done in this trench has several times been destroyed by the enemy’s guns.

9. A second barrier on the Sunken Road has been completed.

10. Parties have been detailed both b day and night to work on supporting point R.4. This work is being converted into an independent all-round work. A start has been made in diverting Muddy Lane so as to pass South of the supporting point clear of the wire.

11. Parties were detailed nightly for the construction of new battalion headquarters just West of WITTEPORT FARM. The excavations were almost ready to receive the framework.

12. A few sappers were attached to the Headquarters of each battalion, which ensure that the dugouts were erected in accordance with the approved design. Large quantities of dugout frames were carried up into the trenches, and erected under R.E. [Royal Engineer] supervision, but the main difficulty and cause of delay has been in obtaining and carrying up enough logs for roofing.

13. Trench boards have been put down in the communication trench leading from Cambridge Road to R.2. Formerly this trench was almost impassable in wet weather. A start has also been made to floor-board the trench leading to R.3. The laying down of trench boards has been carried out simultaneously with the drainage at numerous points in the front line trenches.