Photos of daily life at the front 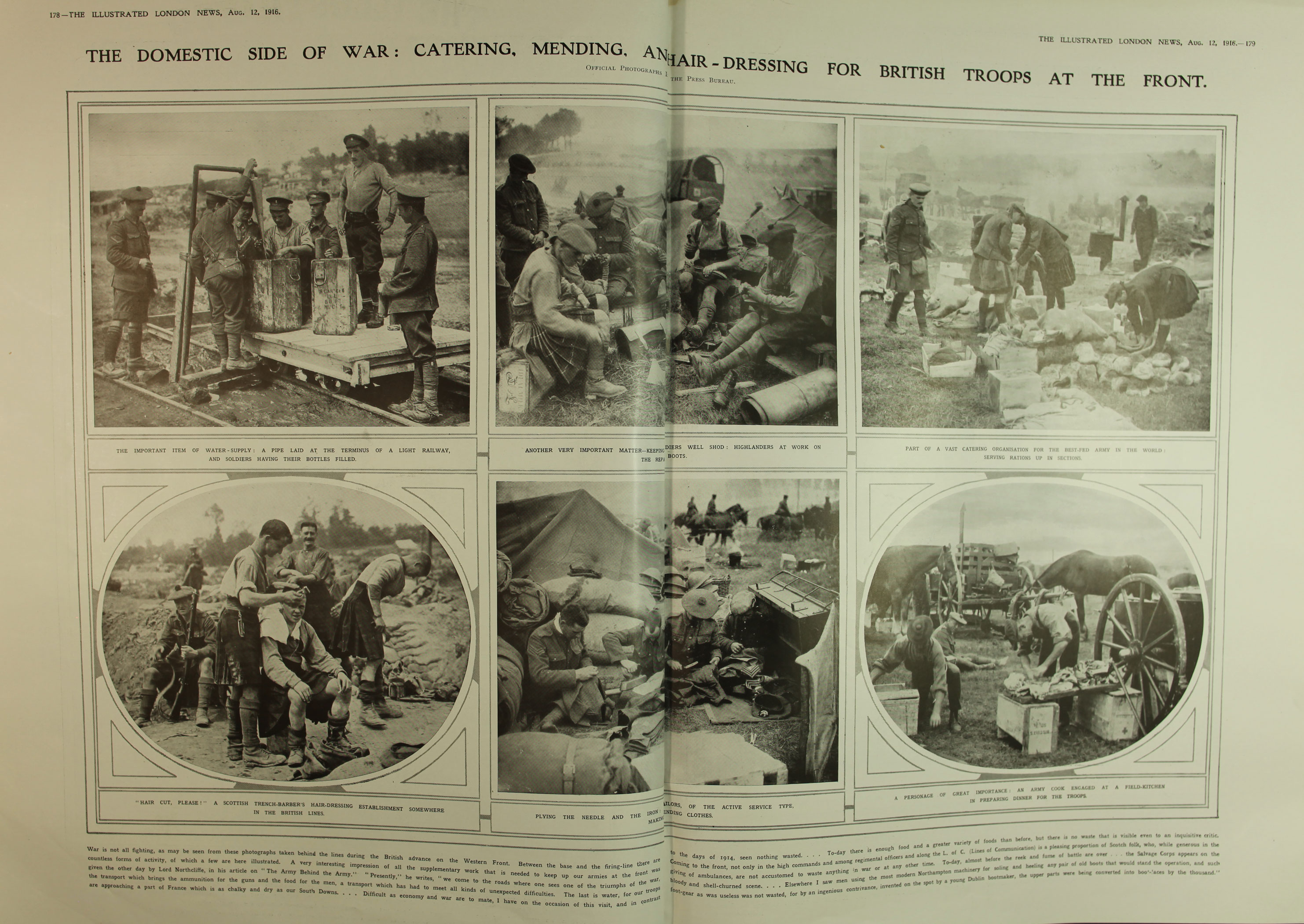 Article with photographs from the Illustrated London News entitled: ‘The domestic side of war: catering, mending, and hair-dressing for British troops at the front’, 12 August 1916, (Catalogue ref: ZPER 34/148)

The important item of water-supply: A pipe laid at the terminus [end] of a light railway, and soldiers having their bottles filled.

Another very important matter-keeping soldiers well shod: Highlanders at work on the repair [of] boots.

Part of a vast catering organisation for the best-fed army in the world: serving rations up in sections.

Plying the needle and the iron: tailors of the active type making [and] mending clothes.

A personage of great importance: an army cook engaged at a field–kitchen in preparing dinner for the troops.

The war is not all fighting, as may be seen from these photographs taken behind the lines during the British advance on the Wester Front. Between the base and the firing-line there are countless forms of activity, of which a few are here illustrated. A very interesting impression of all the supplementary work that is needed to keep up our armies at the front was given the other day by Lord Northcliffe, in his article on “The Army behind the Army”. “Presently”, he writes “we come to the roads where one sees one of the triumphs of the war, the transport which brings the ammunition for the guns and the food for the men,  a transport which has to meet all kinds of unexpected difficulties. The last is water, for our troops are approaching a part of France which is as chalky and dry as our South Downs…Difficult as economy and war are to mate, I have on the occasion of this visit, and in contrast to the days of 1914, seen nothing wasted…Today there is enough food and a greater variety of foods than before, but there is no waste that is visible even to an inquisitive critic. Coming to the front, not only in the high commands and among regimental officers and along the L. of C. (lines of communication) is a pleasing proportion of Scotch folk, who, while generous in the giving of ambulances, are not accustomed to waste anything in war or at any other time. Today, almost before the reek and fume of battle are over… the Salvage Corps appears on the bloody and shell-churned scene… Elsewhere I saw men using the most modern Northampton machinery for soling and heeling any pair of old boots that would stand the operation, and such foot-gear as was useless was not wasted, for by an ingenious contrivance, invented on the spot by a young Dublin bootmaker, the upper parts are being converted into bootlaces by the thousand”.