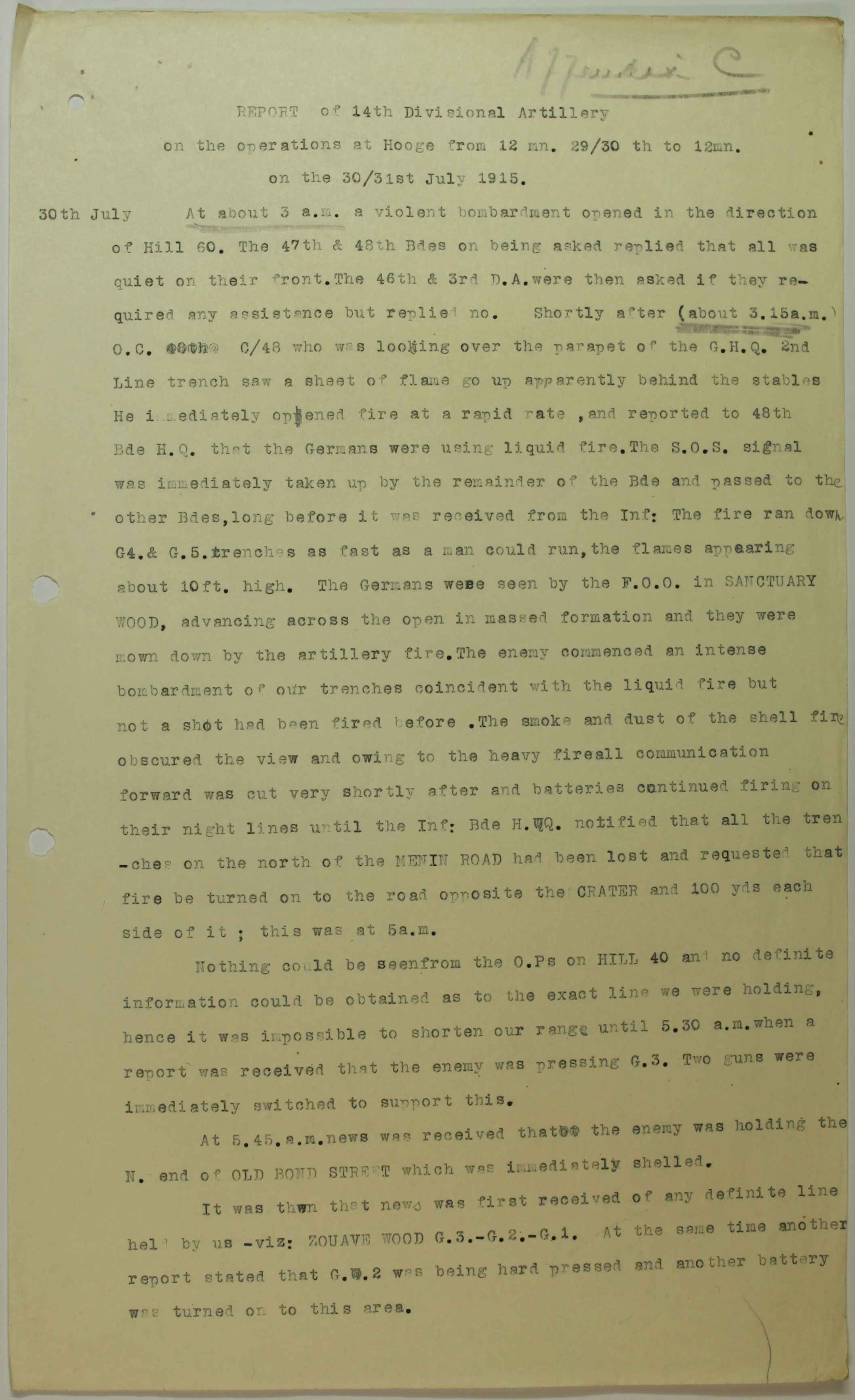 Extract from a Report of the 14th Divisional Artillery at Hooge describing a bombardment with ‘liquid fire’, the first use of a flamethrower [mechanical device to project a long, stream of fire], (Catalogue ref: WO 95/1864)

30th July   At about 3 a.m. a violent bombardment opened in the direction of Hill 60. The 47th and 48th Brigades on being asked replied that all was quiet on their front. The 46th & 3rd D.A. were then asked if they required any assistance but replied no. Shortly after (about 3.15a.m.) O.C. C/48 who was looking over the parapet of the G.H.Q. 2nd Line trench saw a sheet of flame go up apparently behind the stables He immediately opened fire at a rapid rate, and reported to 48th Brigade H.Q. that the Germans were using liquid fire. The S.O.S. signal was immediately taken up by the remainder of the Brigade and passed to the other Brigades, long before it was received from the Inf. The fire ran down G4. And G.5. trenches as fast as a man could run, the flames appearing about 10ft. high. The Germans were seen by the F.O.O. in SANCTUARY WOOD, advancing across the open in massed formation and they were mown down by the artillery fire. The enemy commenced an intense bombardment of our trenches coincident with the liquid fire but not a shot had been fired before. The smoke and dust of the shell fire obscured the view and owing to the heavy fire all communication forward was cut very shortly after and batteries continued firing on their night lines until the Infantry Brigade H.Q. notified that all the trenches on the north of the MENIN ROAD had been lost and requested that fire be turned on to the road opposite the CRATER and 100 yards each side of it; this was at 5a.m.

Nothing could be seen from the O.Ps on HILL 40 and no definite information could be obtained as to the exact line we were holding, hence it was impossible to shorten our range until 5.30 a.m. when a report was received that the enemy was pressing G.3. Two guns were immediately switched to support this.

At 5.45. a.m. news was received that the enemy was holding the north end of OLD BOND STREET which was immediately shelled.

It was then that news was first received of any definite line held by us –viz: ZOUAVE WOOD G.3.-G.2.-G.1. At the same time another report stated that G.2 was being hard pressed and another battery was turned on to this area.