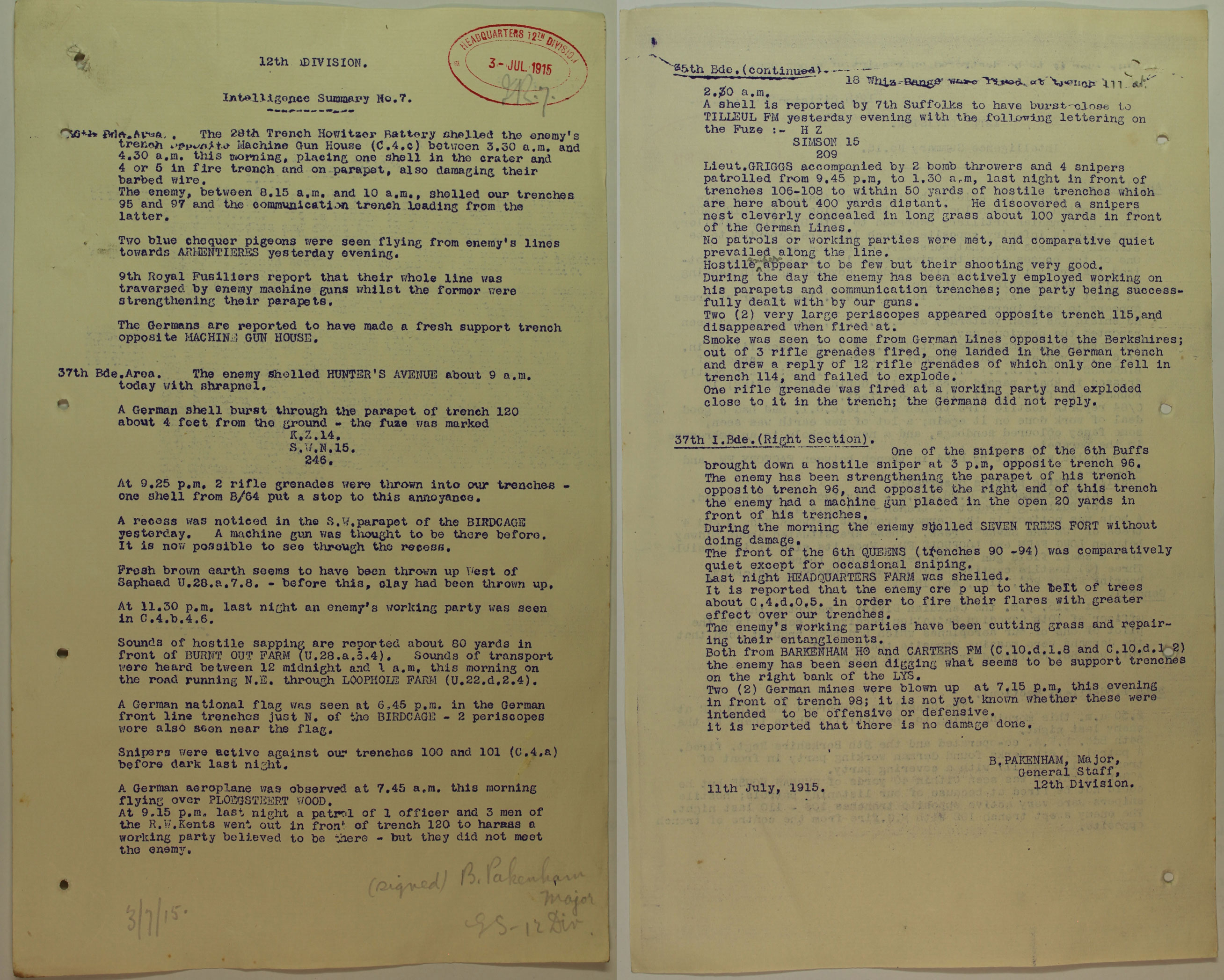 An intelligence summary from B. Pakenham, Major, General Staff, 12th Division, for July 1917 which provides an insight into being under fire and further extract of a report which provides detail about the nature of trench warfare, (Catalogue ref: WO 95/1822)

36th Brigade Area.    The 29th Trench Howitzer Battery shelled the enemy’s trench opposite Machine Gun House (C.4.c) between 3.30 a.m. and 4.30 a.m. this morning, placing one shell in the crater and 4 or 5 in fire trench and on parapet, also damaging their barbed wire.

The enemy, between 8.15 a.m. and 10 a.m., shelled our trenches 95 and 97 and the communication trench leading from the latter. Two blue chequer pigeons were seen flying from enemy’s lines towards ARMENTIERES yesterday evening.

9th Royal Fusiliers report that their whole line was traversed by enemy machine guns whilst the former were strengthening their parapets.

The Germans are reported to have made a fresh support trench opposite MACHINE GUN HOUSE.

At 9.25 p.m. 2 rifle grenades were thrown into our trenches – one shell from B/64 put a stop to this annoyance.

A recess was noticed in the S.W. parapet of the BIRDCAGE yesterday. A machine gun was thought to be there before. It is now possible to see through the recess.

Sounds of hostile sapping are reported about 80 yards in front of BURNT OUT FARM (U.28.a.5.4). Sounds of transport were heard between 12 midnight and 1 a.m. this morning on the road running N.E. through LOOPHOLE FARM (U.22.d.2.4).

A German national flag was seen at 6.45 p.m. in the German front line trenches just N. of the BIRDCAGE – 2 periscopes were also seen near the flag.

Snipers were active against our trenches 100 and 101 (C.4.a) before dark last night.

A German aeroplane was observed at 7.45 a.m. this morning flying over PLOEGSTEERT WOOD.

At 9.15 p.m. last night a patrol of 1 officer and 3 men of the R. W. Kents went out in front of trench 120 to harass a working party believed to be there – but they did not meet the enemy.

A shell is reported by 7th Suffolk’s to have burst close to TILLEUL FM yesterday evening with the following lettering on the Fuze: –

Lieutenant GRIGGS accompanied by 2 bomb throwers and 4 snipers patrolled from 9.45 pm, to 1.30 am, last night in front of trenches 106-108 to within 50 yards of hostile trenches which are here about 400 yards distant. He discovered a snipers nest cleverly concealed in long grass about 100 yards in front of the German Lines.

No patrols or working parties were met, and comparative quiet prevailed along the line.

Hostile (snipers) appear to be few but their shooting very good.

During the day the enemy has been actively employed working on his parapets and communication trenches; one party being successfully dealt with by our guns.

Two (2) very large periscopes appeared opposite trench 115, and disappeared when fired at.

Smoke was seen to come from German Lines opposite the Berkshires; out of 3 rifle grenades fired, one landed in the German trench and drew a reply of 12 rifle grenades of which only one fell in trench 114, and failed to explode.

One rifle grenade was fired at a working party and exploded close to it in the trench; the Germans did not reply.

During the morning the enemy shelled SEVEN TREES FORT without doing damage.

The front of the 6th QUEENS (trenches 90-94) was comparatively quiet except for occasional sniping.

It is reported that the enemy cre p up to the belt of trees about C.4.d.0.5. in order to fire their flares with greater effect over our trenches.

The enemy’s working parties have been cutting grass and repairing their entanglements.

Both from BARKENHAM HO and CARTERS FM (C.10.d.1.8 and C.10.d.1.2) the enemy has been seen digging what seems to be support trenches on the right bank of the LYS.

Two (2) German mines were blown up at 7.15 pm this evening in front of trench 98; it is not yet known whether these were intended to be offensive or defensive.

It is reported that there is no damage done.