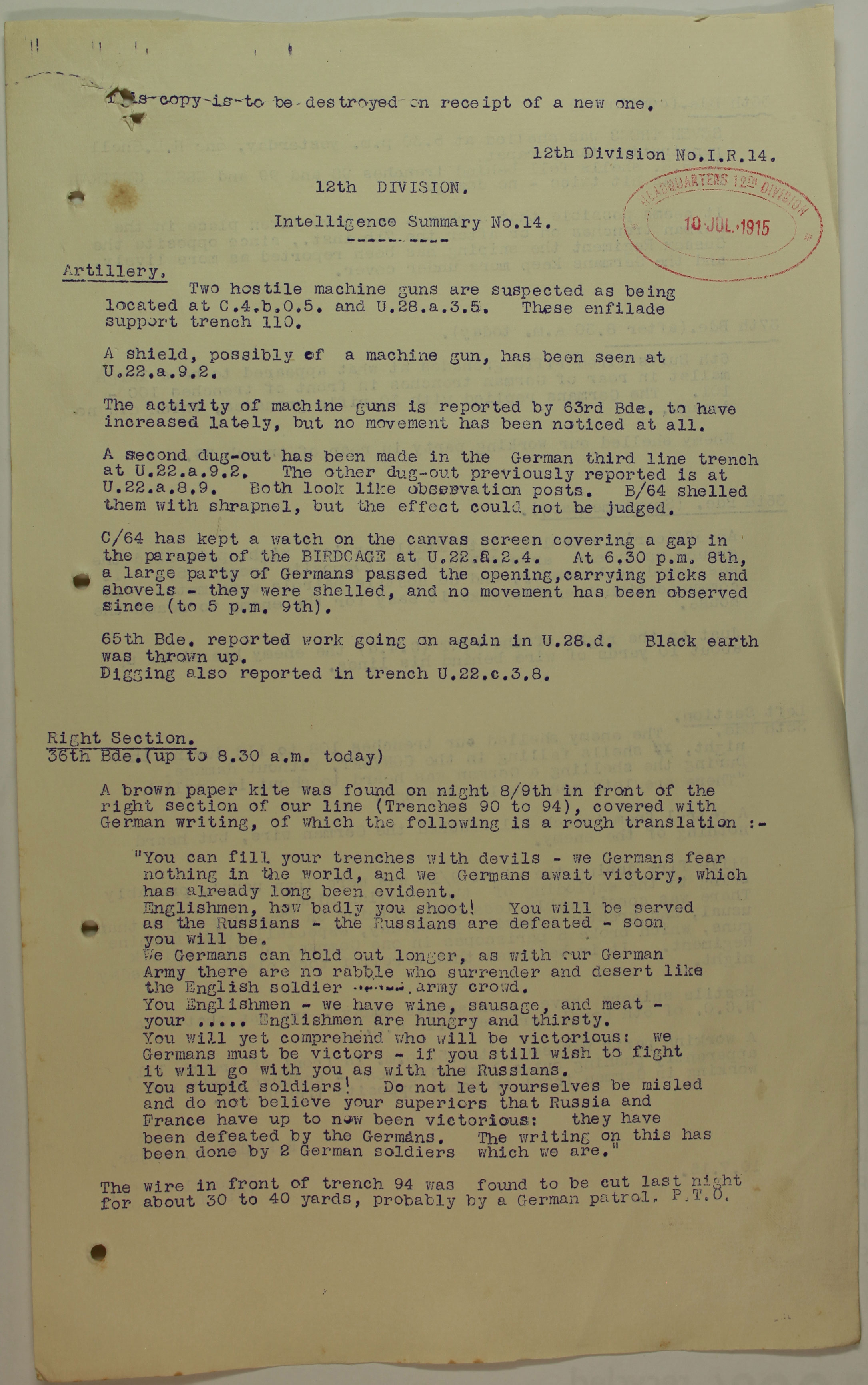 Extract from an intelligence summary by B. Pakenham, Major, General Staff, 12th Division, 10 July 1915, describes a German attempt at intimidation in the form of a paper kite in the trenches, (Catalogue ref: WO 95/1822)

The activity of machine guns is reported by 63rd Brigade to have increased lately, but no movement has been noticed at all.

A second dug-out has been made in the German third line trench at U.22.a.9.2. The other dug-out previously reported is at U.22.a.8.9. Both look like observation posts. B/64 shelled them with shrapnel, but the effect could not be judged.

C/64 has kept a watch on the canvas screen covering a gap in the parapet of the BIRDCAGE at U.22.a.2.4. At 6.30 p.m. 8th, a large party of Germans passed the opening, carrying picks and shovels – they were shelled, and no movement has been observed since (to 5p.m. 9th).

A brown paper kite was found on night 8/9th in front of the right section of our line (Trenches 90 to 94), covered with German writing, of which the following is a rough translation: –

“You can fill your trenches with devils – we Germans fear nothing in the world, and we Germans await victory, which has already long been evident. Englishmen, how badly you shoot! You will be served as the Russians – the Russians are defeated – soon you will be.

We Germans can hold out longer, as with our German Army there are no rabble who surrender and desert like the English soldier – – – army crowd.

You Englishmen – we have wine, sausage, and meat – your ….. Englishmen are hungry and thirsty.

You will yet comprehend who will be victorious: we Germans must be victors – if you still wish to fight it will go with you as with the Russians.

You stupid soldiers! Do not let yourselves be misled and do not believe your superiors that Russia and France have up to now been victorious: they have been defeated by the Germans. The writing on this has been done by 2 German soldiers which we are.”

The wire in front of trench 94 was found to be cut last night for about 30 to 40 yards, probably by a German patrol…