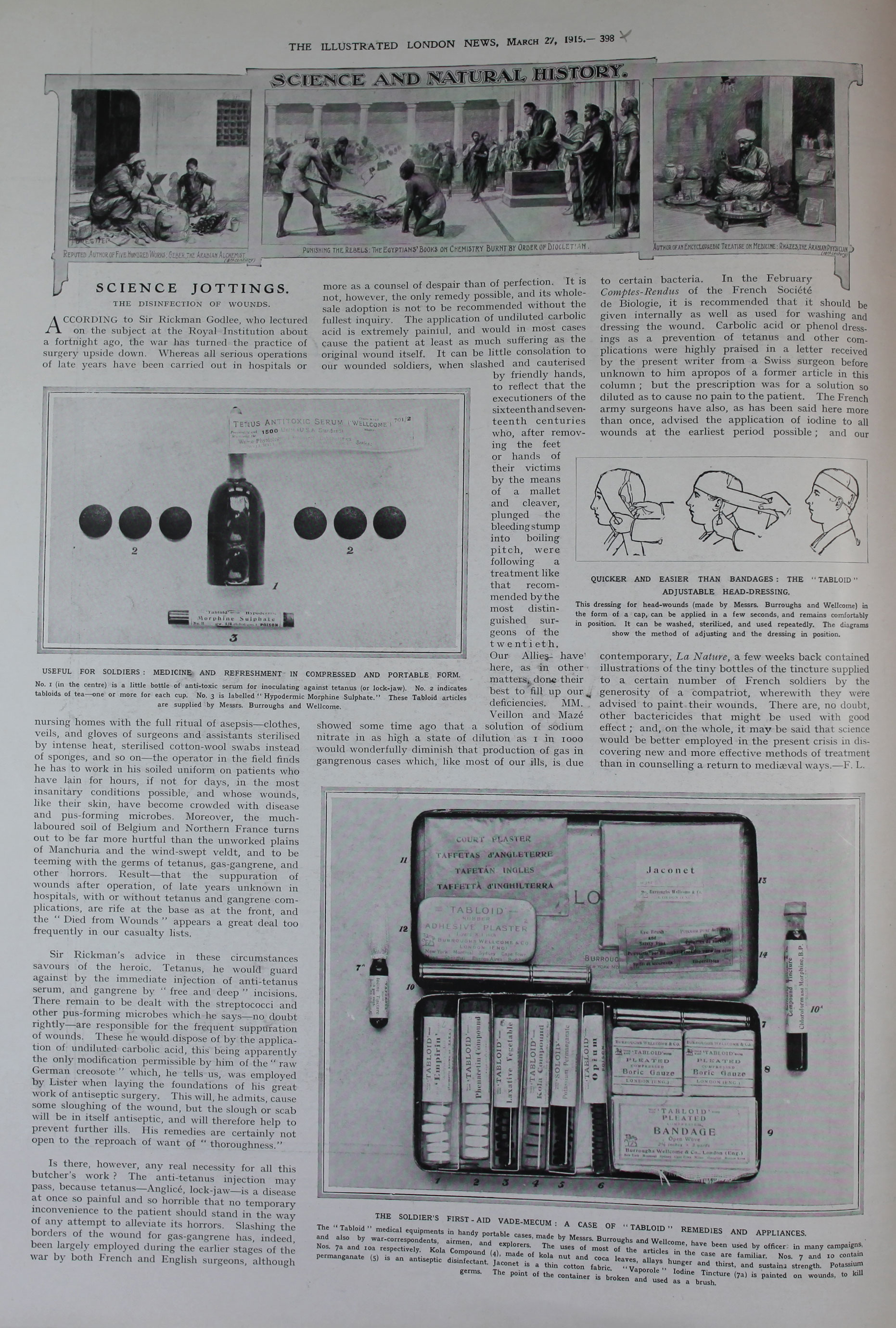 Article describes the problem of wound infection and tetanus with photographs of soldiers’ first aid kits and drawings of dressings and bandages. 27 March, 1915, (Catalogue ref: ZPER 34/146)

The disinfection of wounds

According to Sir Rickman Godlee, who lectured on the subject at the Royal Institution about a fortnight ago, the war has turned the practice of surgery upside down. Whereas all serious operations of late years have been carried out in hospitals or nursing homes with the full ritual of asepsis – clothes, veils, and gloves of surgeons and assistants sterilised by intense heat, sterilised cotton-wool swabs instead of sponges, and so on – the operator in the field finds he has to work in his soiled uniform on patients who have lain for hours, if not for days, in the most insanitary conditions possible, and whose wounds, like their skin, have become crowded with disease and pus-forming microbes. Moreover, the much laboured soil of Belgium and Northern France turns out to be far more hurtful than the unworked plains of Manchuria and the wind-swept veldt, and to be teeming with the germs of tetanus, gas-gangrene, and other horrors. Result – that the suppuration of wounds after operation, of late years unknown in hospitals, with or without tetanus and gangrene complications, are rife at the base as at the front, and the ‘Died from Wounds’ appears a great deal too frequently in our casualty lists.

Sir Rickman’s advice in the circumstances savours of the heroic. Tetanus, he would guard against by the immediate injection of anti-tetanus serum, and gangrene by ‘free and deep’ incisions. There remain to be dealt with the streptococci and other pus-forming microbes which he says – no doubt rightly – are responsible for the frequent suppuration of wounds. These he would dispose of by the application of undiluted carbolic acid, this being apparently the only modification permissible by him of the “raw German creosote” which, he tells us, was employed by Lister when laying the foundations of his great work of antiseptic surgery. This will, he admits, cause some sloughing of the wound, but the slough or scab will be in itself antiseptic, and will therefore help to prevent further ills. His remedies are certainly not open to the reproach of want of ‘thoroughness.’

Is there, however, any real necessity for all this butcher’s work? The anti-tetanus injection may pass, because tetanus – Anglicé, lock-jaw – is a disease at once so painful and so horrible that no temporary inconvenience to the patient should stand in the way of any attempt to alleviate its horrors. Slashing the borders of the wound for gas-gangrene has, indeed, been largely employed during the earlier stages of the war by both French and English surgeons, although more as a counsel of despair than of perfection. It is not, however, the only remedy possible, and its wholesale adoption is not to be recommended without the fullest inquiry. The application of undiluted carbolic acid is extremely painful, and would in most cases cause the patient at least as much suffering as the original would itself. It can be little consolation to our wounded soldiers, when slashed and cauterised by friendly hands, to reflect that the executioners of the sixteenth and seventeenth centuries who, after removing the feet and hands of their victims by means of a mallet and cleaver, plunged the bleeding stump into boiling pitch, were following a treatment like that recommended by the most distinguished surgeons of the twentieth. Our Allies have here, as in other matters, done their best to fill up our deficiencies. MM. Veillon and Mazé showed some time ago that a solution of sodium nitrate in as high a state of dilution as 1 in 1000 would wonderfully diminish that production of gas in gangrenous cases which, like most of our ills, is due to certain bacteria. In the February Comptes-Rendus of the French Société de Biologie, it is recommended that it should be given internally as well as used for washing and dressing the wound. Carbolic acid or phenol dressings as a prevention of tetanus and other complications were highly praised in a letter received by the present writer from a Swiss surgeon before unknown to him apropos of a former article in this column; but the prescription was for a solution so diluted as to cause no pain to the patient. The French army surgeons have also, as has been said here more than once, advised the application of iodine to all wounds at the earliest period possible; and out contemporary, La Nature, a few weeks back contained illustrations of the tiny bottles of the tincture supplied to a certain number of French soldiers by the generosity of a compatriot, wherewith they were advised to paint their wounds. There are, no doubt, other bactericides that might be used with good effect; and, on the whole, it may be said that science would be better employed in the present crisis in discovering new and more effective methods of treatment than in counselling a return to mediæval ways. – F.L.

Caption one: Useful for Soldiers: Medicine and refreshment in compressed and portable form. No.1 (In the centre) is a little bottle of anti-toxic serum for inoculating against tetanus (or lock-jaw). No. 2 indicates tabloids of tea – one or more for each cup. No.3 is labelled ‘Hypodermic Morphine Sulphate.’ These tabloid articles are supplied by Messrs. Burroughs and Wellcome.

Caption Two: Quicker and Easier than bandages: The ‘Tabloid’ adjustable head-dressing. This dressing for head-wounds (made by Messrs. Burroughs and Wellcome) in the form of a cap can be applied in a few seconds, and remains comfortably in position. It can be washed, sterilised, and used repeatedly. The diagrams show the method of adjusting and the dressing in position.

Caption Three: The Soldier’s first-aid vade-mecum: a case of ‘tabloid’ remedies and appliances. The ‘tabloid’ medical equipments in handy portable cases, made by Messrs. Burroughs and Wellcome, have been used by officer in many campaigns, and also by war-correspondents, airmen, and explorers. The uses of most of the articles in the case are familiar. Nos. 7 and 10 contain No.s 7a and 10a respectively. Kola Compound (4) made of kola nut and coca leaves, allays hunger and thirst, and sustains strength. Potassium permanganate (5) is an antiseptic disinfectant. Jaconet is a thin cotton fabric. ‘Vaporole’ Iodine Tincture (7a) is painted on wounds, to kill germs. The point of the container is broken and used as a brush.