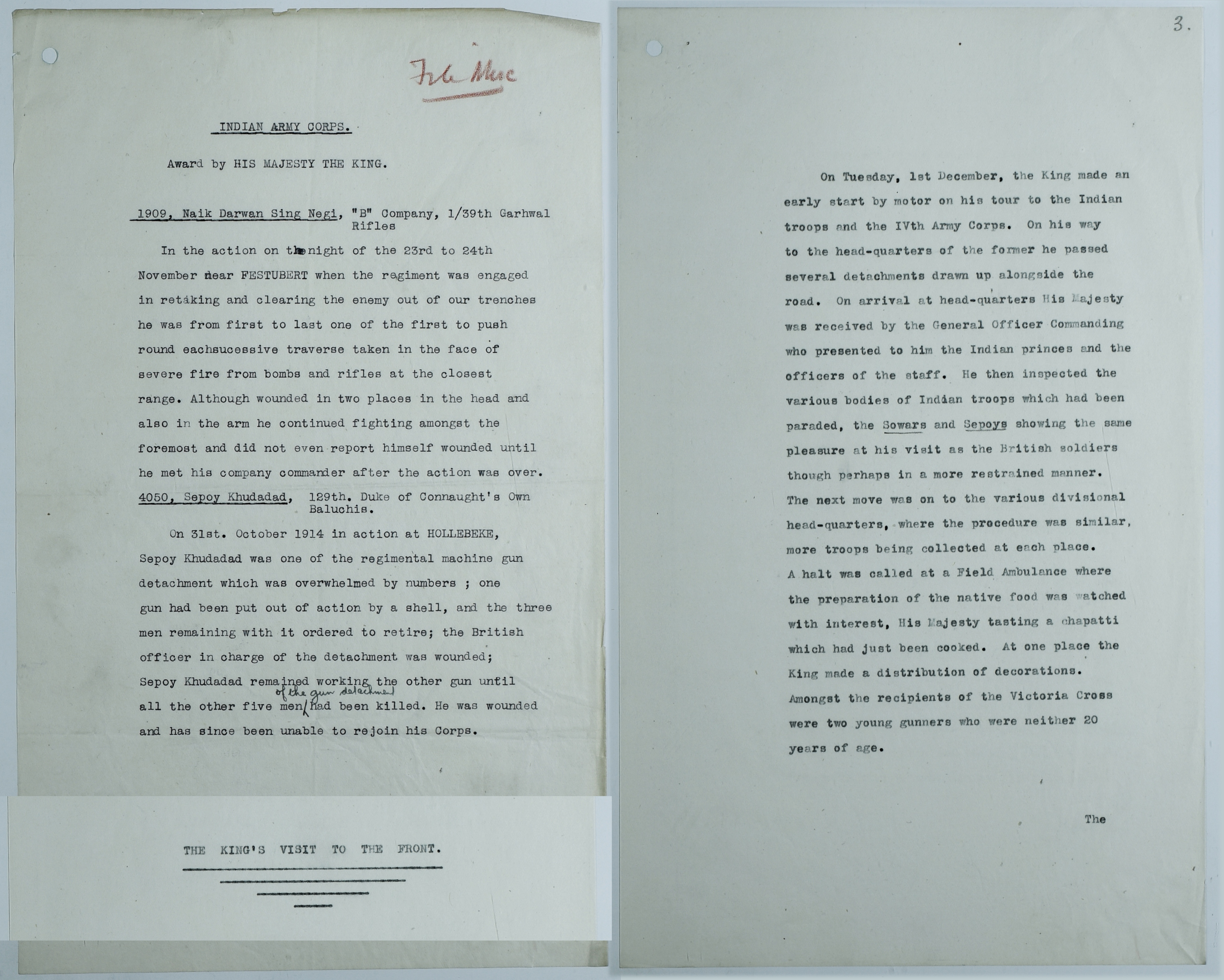 Naik Darwan Sing Negi and Sepoy Khudadad were the first two Indians to be awarded the Victoria Cross. Being presented the award by the King added to their self-esteem and helped to ensure their loyalty and that of their fellows. Indians won eight Victoria Crosses on the Western Front out of a total of 11 awarded during the First World War.

The King’s tour and inspection of Indian troops – and sampling of a chapatti – is another example of securing the loyalty of the Indian soldiers.

Award by His Majesty the King.

1909, Naik Darwan Singh Negi, “B” Company,1/39th Garhwal Punjab. In the action on the night of 23rd and 24th November near Festubert when the regiment was engaged in retaking  and clearing the enemy  out of our trenches he was from first to last one of the first to push round each successive traverse taken in the face of severe fire from bombs and rifles at the closest range. Although wounded in two places in the head and also in the arm he continued fighting amongst the foremost and did not even report himself wounded until he met his Company commander after the action was over.

On 31st October 1914 in active action at HOLLEBEKE, sepoy Khudadad was one of the regimental machine gun detachment  which was overwhelmed by numbers; one gun had been put out of action by a shell, and the three men remaining with it ordered to retire; the British Officer in charge of the detachment was wounded; Sepoy Khudadad remained working the other gun until all the other 5 men of the gun detachment had been killed. He was wounded and has since been unable to rejoin his Corps.

On Tuesday, 1st December, the king made an early start by motor on his tour of the Indian troops and the IVth Army Corps. On his way to the HQ of the former he passed several detachments drawn up alongside the road. On arrival at the HQ HM was received by the General Officer Commanding who presented to him the Indian Princes and the Officers of the staff. He then inspected the various bodies of Indian troops which had been paraded, the Sowars and Sepoys showing the same pleasure at his visit as the British soldiers though perhaps in a more restrained manner. The next move was to the various divisional headquarters, where the precedent was similar, more troops being collected at each place. A halt was called at the Field Ambulance where the preparation of the native food was watched with interest, HM King tasting a chapatti which had just been cooked. At one place the King made a distribution of decorations. Amongst the recipient of the Victoria Cross were 2 young gunners who were neither 20 years of age.