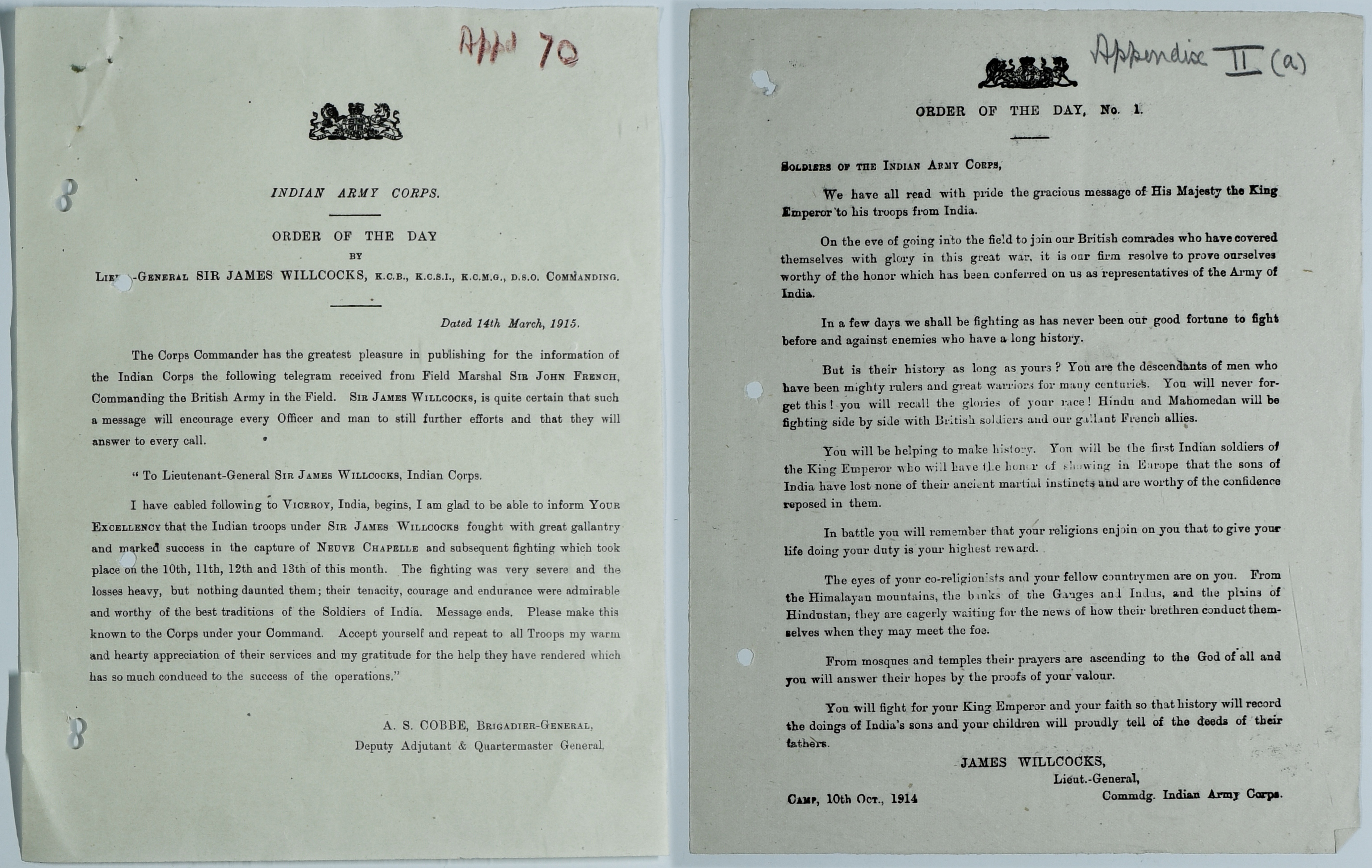 Order of the Day

The Corps Commander has the greatest pleasure in publishing for the information of the Indian Corps the following telegram received from Field Marshal SIR JOHN FRENCH, Commanding the British Army in the Field. SIR JAMES WILLCOCKS, is quite certain that such a message will encourage every Officer and man to still further efforts and that they will answer to every call.

I have cabled following to Viceroy, India, begins, I am glad to be able to inform your Excellency that the Indian troops under SIR JAMES WILLCOCKS fought with great gallantry and marked success in the capture of NEUVE CHAPELLE and subsequent fighting which took place on the 10th,11th,12th and 13th of this month. The fighting was very severe and the losses heavy, but nothing daunted them; their tenacity, courage and endurance were admirable and worthy of the best traditions of the soldiers of India. Message ends. Please make this known to the Corps under your command. Accept yourself and repeat to all troops my warm and hearty appreciation of their services and my gratitude for the help they have rendered which has so much conduced to the success of the operations.”

Soldiers of the Indian Army Corps,

We have all read with pride the gracious message of His Majesty the King Emperor to his troops from India.

On the eve of going into the field to join our British comrades who have covered themselves with glory in this great war, it is our firm resolve to prove ourselves worthy of the honour which has been conferred on us as representatives of the Army of India.

In a few days we shall be fighting as has never been our good fortune to fight before against enemies who have a long history.

But is their history as long as yours? You are the descendants of men who have been mighty rulers and great warriors for many centuries. You will never forget this! You will recall the glories of your race. Hindu and Mahomedan will be fighting side by side with British soldiers and our gallant French allies.

You will be helping to make history. You will be the first Indian soldiers of the King Emperor who will have the honour of showing in Europe that the sons of India have lost none of the ancient martial instincts and are worthy of the confidence reposed in them.

In battle you will remember that your religions enjoin on you that to give your life doing your duty is your highest reward.

The eyes of your co-religionists and your fellow countrymen are on you. From the Himalayan mountains, the banks of the Ganges and Indus and the Plains of Hindustan, they are eagerly waiting for the news of how their brethren conduct themselves when they may meet the foe.

From mosques and temples their prayers are ascending to the God of all and you will answer their hopes by the proofs of your valour.

You will fight for your King Emperor and your faith so that history will record the doings of India’s sons and your children will proudly tell of the deeds of their fathers.