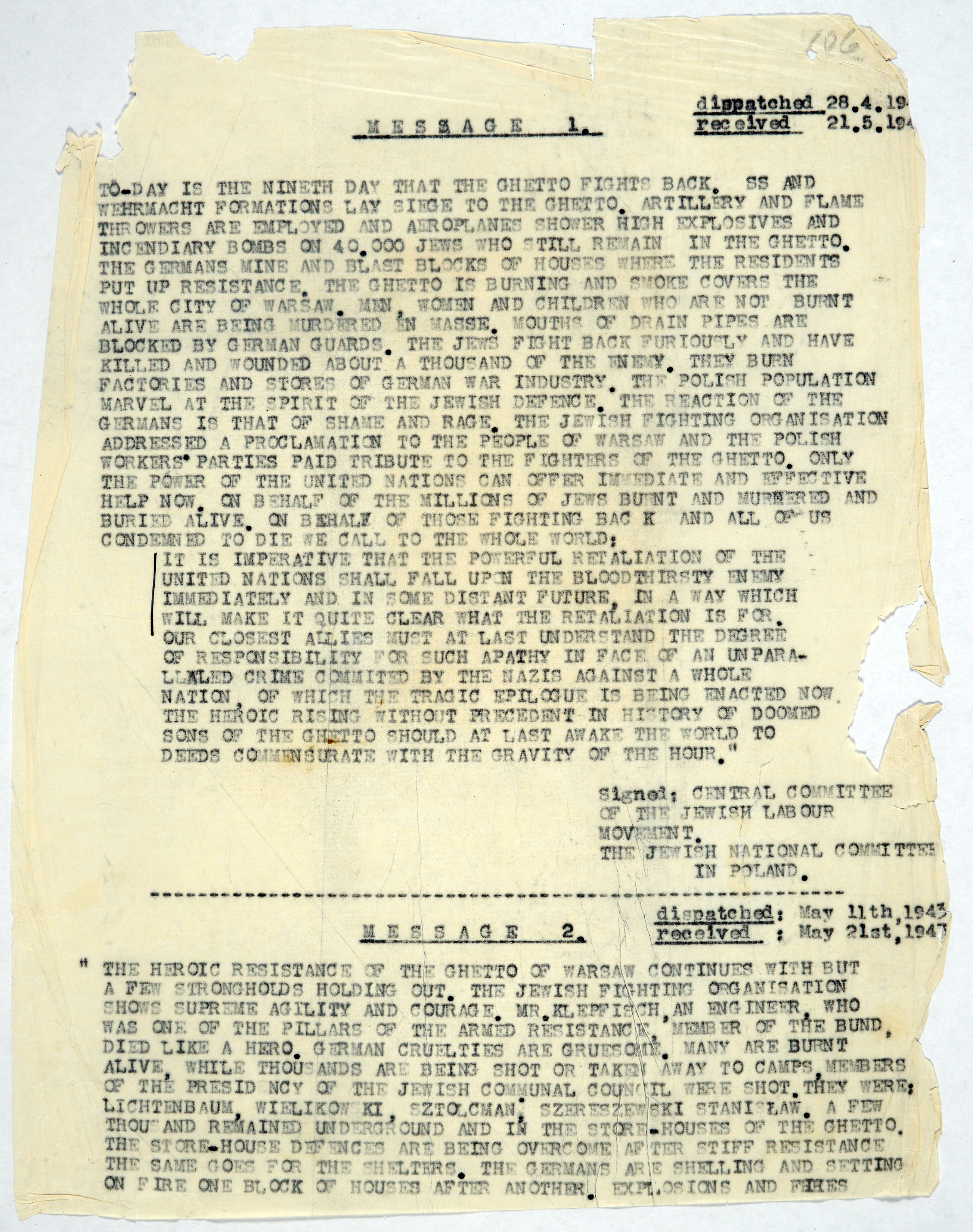 Today is the nineth [sic] day that the Ghetto fights back. SS and Wehrmacht formations lay siege to the ghetto. Artillery and flame throwers are employed and aeroplanes shower high explosives and incendiary bombs on 40,000 Jews who still remain in the ghetto. The Germans mine and blast blocks of houses where the residents have put up resistance. The ghetto is burning and smoke covers the whole city of Warsaw. Men, women and children who are not burnt alive are being murdered en masse. Mouths of drain pipes are blocked by German guards. The Jews fight back furiously and have killed and wounded about a Thousand of the enemy. They burn factories and stores of German war industry. The Polish population marvel at the spirit of the Jewish defence. The reaction of the Germans is that of shame and rage. The Jewish fighting organisation addressed a proclamation to the people of Warsaw and the Polish workers parties paid tribute to the fighters of the ghetto. Only the power of the United Nations can offer immediate and effective help now. On behalf of the millions of Jews burnt and murdered and buried alive. On behalf of those fighting back and all of us condemned to die we call to the whole world;

It is imperative that the powerful retaliation of the United Nations shall fall upon the bloodthirsty enemy immediately and in some distant future, in a way which will make it quite clear what the retaliation is for. Our closest allies must at last understand the degree of responsibility for such apathy in face of an unparalleled crime commited [sic] by the Nazis against a whole nation, of which the tragic epilogue is being enacted now. The heroic rising without precedent in history of doomed sons of the ghetto should at last awake the world to deeds commensurate with the gravity of the hour.

The heroic resistance of the ghetto of Warsaw continues with but a few strongholds holding out. The Jewish fighting organisation shows supreme agility and courage.  Mr. Klepfisch, an engineer, who was one of the pillars of the armed resistance, member of the bund, died like a hero. German cruelties are gruesome. Many are burnt alive, while thousands are being shot or taken away to camps, members of the presidency of the Jewish communal council were shot. They were: Lichtenbaum, Wielikowski, Sztolcman, Szereszewski Stanislaw. A few thousand remained underground and in the store-houses of the ghetto. The store-house defences are being overcome after stiff resistance the same goes for the shelters. The Germans are shelling and setting on fire one block of houses after another. Explosions and fires […]