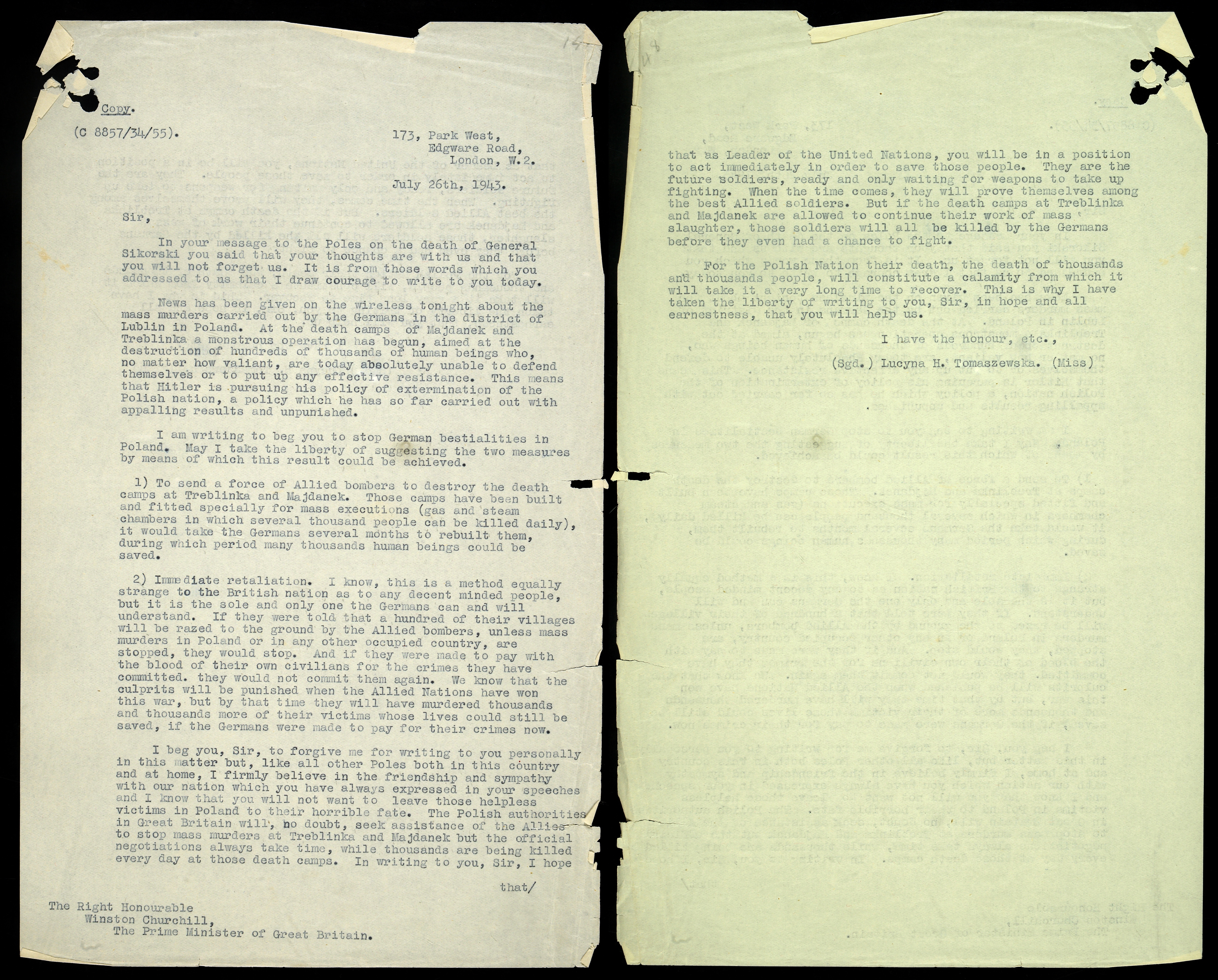 In your message to the Poles on the death of General Sikorski you said that your thoughts are with us and that you will not forget us. It is from these words which you addressed to us that I draw courage to write to you today.

News has been given on the wireless tonight about the mass murders carried out by the Germans in the district of Lublin in Poland. At the death camps of Majdanek and Treblinka a monstrous operation has begun, aimed at the destruction of hundreds of thousands of human beings who, no matter how valiant, are today absolutely unable to defend themselves or to put up any effective resistance. This means that Hitler is pursuing his policy of extermination of the Polish nation, a policy which he has so far carried out with appalling results and unpunished.

I am writing to beg you to stop German bestialities in Poland. May I take the liberty of suggesting the two measures by means of which this result could be achieved.

I beg you, Sir, to forgive me for writing to you personally in this matter but, like all other Poles both in this country and at home, I firmly believe in the friendship and sympathy with our nation which you have always expressed in your speeches and I know that you will not want to leave those helpless victims in Poland to their horrible fate. The Polish authorities in Great Britain will, no doubt, seek assistance of the Allies to stop mass murders at Treblinka and Majdanek but the official negotiations always take time, while thousands are being killed every day at those death camps. In writing to you, Sir, I hope that/

that as Leader of the United Nations, you will be in a position to act immediately in order to save those people. They are the future soldiers, ready and only waiting for weapons to take up fighting. When the time comes, they will prove themselves among the best Allied soldiers. But if the death camps at Treblinka and Majdanek are allowed to continue their work of mass slaughter, those soldiers will all be killed by the Germans before they even had a chance to fight.

For the Polish Nation their death, the death of thousands and thousands people, will constitute a calamity from which it will take it a very long time to recover. This is why I have taken the liberty of writing to you, Sir, in hope and all earnestness, that you will help us.

I have the honour, etc.,