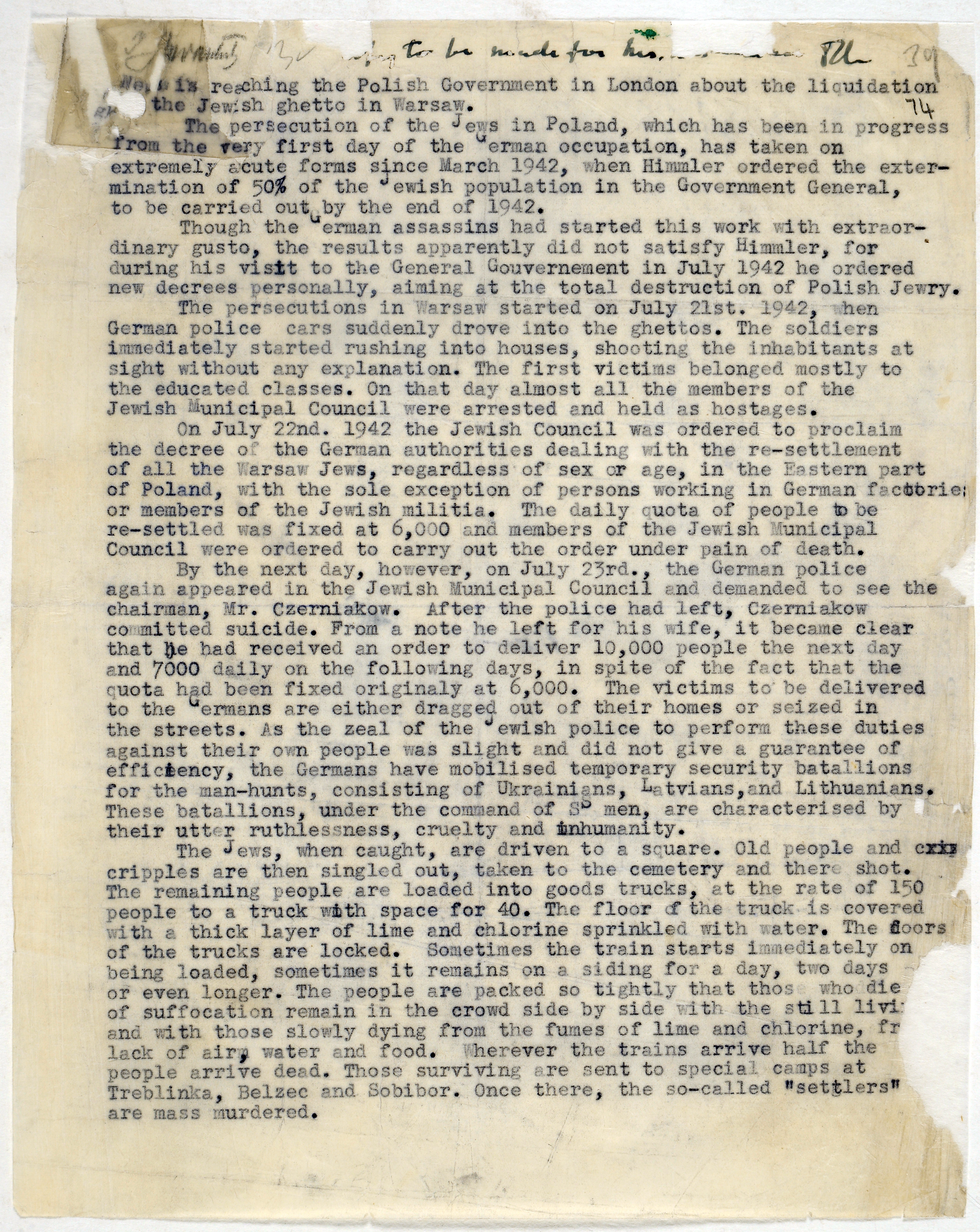 News is reaching the Polish Government in London about the liquidation [of] the Jewish ghetto in Warsaw.

The persecution of the Jews in Poland, which has been in progress from the very first day of the German occupation, has taken on extremely acute forms since March 1942, when Himmler ordered the extermination of 50% of the Jewish population in the Government General, to be carried out by the end of 1942.

Though the German assassins had started this work with extraordinary gusto, the results apparently did not satisfy Himmler, for during his visit to the General Gouvernement [sic] in July 1942 he ordered new decrees personally, aiming at the total destruction of Polish Jewry.

The persecutions in Warsaw started on July 21st. 1942, when German police cars suddenly drove into the ghettos. The soldiers immediately started rushing into houses, shooting the inhabitants at sign without any explanation. The first victims belonged mostly to the educated classes. On that day almost all the members of the Jewish Municipal Council were arrested and held as hostages.

On July 22nd. 1942 the Jewish Council was ordered to proclaim the decree of the German authorities dealing with the resettlement of all the Warsaw Jews, regardless of sex or age, in the Eastern part of Poland, with the sole exception of persons working in German factories or members of the Jewish militia. The daily quota of people to be re-settled was fixed at 6,000 and members of the Jewish Municipal Council were ordered to carry out the order under the pain of death.

By the next day, however, on July 23rd., the German police again appeared in the Jewish Municipal Council and demanded to see the chairman, Mr. Czerniakow. After the police had left, Czerniakow committed suicide. From a note he left for his wife, it became clear that he had received an order to deliver 10,000 people the next day and 7000 daily on the following days, in spite of the fact that the quota had been fixed originally at 6,000. The victims to be delivered to the Germans are either dragged out of their homes or seized in the streets. As the zeal of the Jewish police to perform these duties against their own people was slight and did not give a guarantee of efficiency, the Germans have mobilised temporary security batallions [sic] for the man-hunts, consisting of Ukrainians, Latvians, and Lithuanians. These batallions, under the command of SS men, are characterised by their utter ruthlessness, cruelty and inhumanity.

The Jews, when caught, are driven to a square. Old people and cripples are then singled out, taken to the cemetery and there shot. The remaining people are loaded into goods trucks, at the rate of 150 people to a truck with space for 40. The floor of the truck is covered with a thick layer of lime and chlorine sprinkled with water. The doors of the trucks are locked. Sometimes the train starts immediately on being loaded, sometimes it remains on a siding for a day, two days or even longer. The people are packed so tightly that those who die of suffocation remain the crowd side by side with the still living and those slowly dying from the fumes of lime and cholorine, from lack of air, water and food. Wherever the trains arrive half the people arrive dead. Those surviving are sent to special camps at Treblinka, Belzec and Sobibor. Once there, the so-called ‘settlers’ are mass murdered.