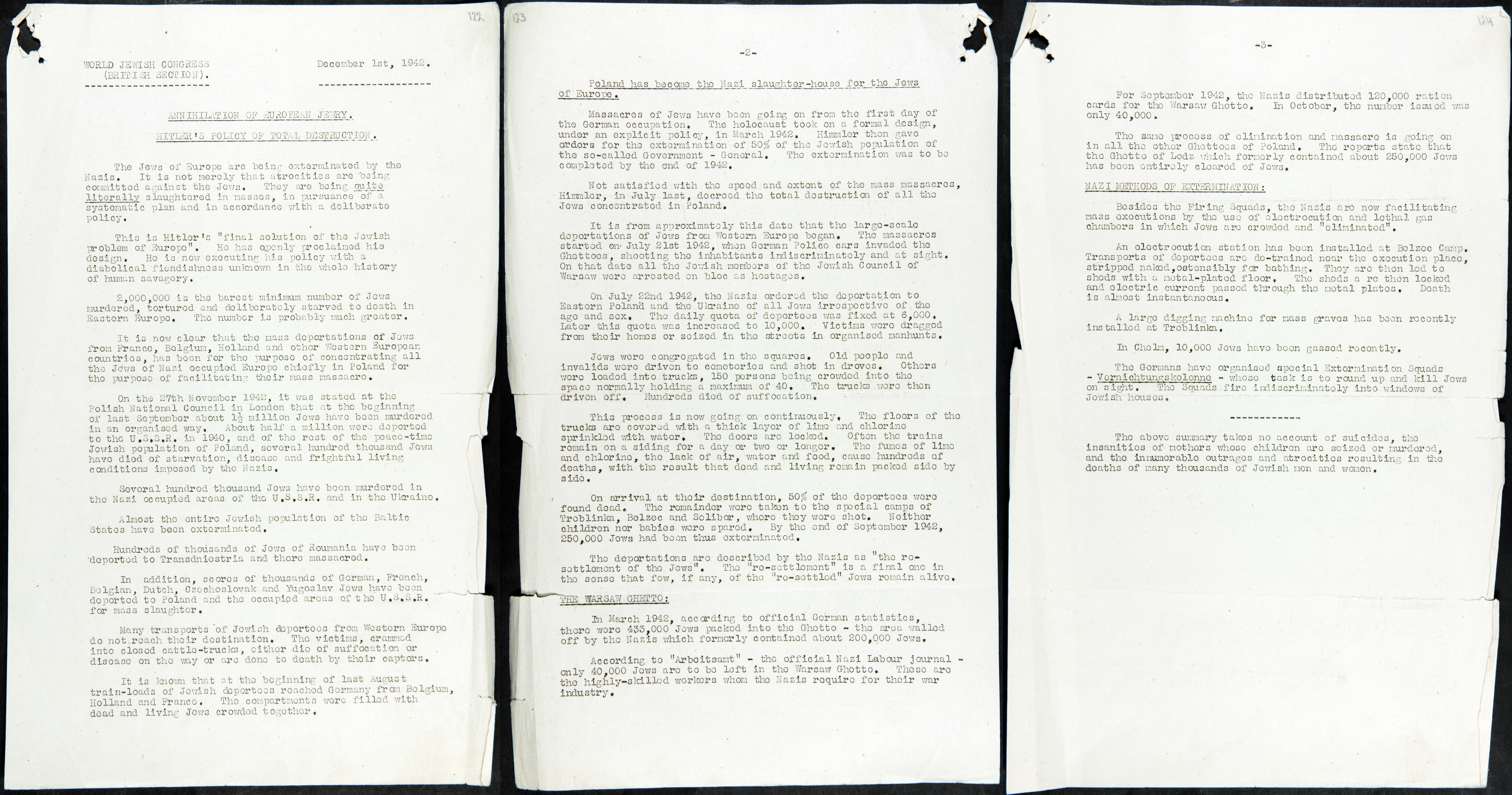 The Jews of Europe are being exterminated by the Nazis. It is not merely that atrocities are being committed against the Jews. They are being quite literally slaughtered in masses, in pursuance of a systematic plan and in accordance with a deliberate policy.

This is Hitler’s ‘final solution of the Jewish problem of Europe’. He has openly proclaimed his design. He is now executing his policy with a diabolical fiendishness unknown in the whole history of human savagery.

2,000,000 is the barest minimum number of Jews murdered, tortured and deliberately starved to death in Eastern Europe. The number is probably much greater.

It is now clear that the mass deportation of Jews from France, Belgium, Holland and other Western European countries, has been for the purpose of concentrating all the Jews of Nazi occupied Europe chiefly in Poland for the purpose of facilitating their mass massacre.

On the 27th November 1942, it was stated at the Polish National Council in London that at the beginning of last September about 1 ½ million Jews have been murdered in an organised way. About half a million were deported to the U.S.S.R. in 1940, and of the rest of the peace-time Jewish population of Poland, several hundred thousand Jews have died of starvation, disease and frightful living conditions imposed by the Nazis.

Several hundred thousand Jews have been murdered in the Nazi occupied areas of the U.S.S.R. and in the Ukraine.

Almost the entire Jewish population of the Baltic States have been exterminated.

Hundreds of thousands of Jews of Roumania have been deported to Transdniestria and there massacred.

In addition, scores of thousands of German, French, Belgian, Dutch, Czechoslovak and Yugoslav Jews have been deported to Poland and the occupied areas of the U.S.S.R. for mass slaughter.

Many transports of Jewish deportees from Western Europe do not reach their destination. The victims, crammed into closed cattle-trucks, either die of suffocation or disease on the way or are done to death by their captors.

It is known that at the beginning of last August train-loads of Jewish deportees reached Germany from Belgium, Holland and France. The compartments were filled with dead and living Jews crowded together.

POLAND HAS BECOME THE NAZI SLAUGHTER-HOUSE FOR THE JEWS OF EUROPE:

Massacres of Jews have been going on from the first say of the German occupation. The holocaust took on a formal design, under an explicit policy, in March 1942. Himmler then gave orders for the extermination of 50% of the Jewish population of the so-called Government-General. The extermination was to be completed by the end of 1942.

Not satisfied with the speed and extent of the mass massacres, Himmler, in July last, decreed the total destruction of all the Jews concentrated in Poland.

It is from approximately this date that the large-scale deportations of Jews from Western Europe began. The massacres started on July 21st 1942, when German Police cars invaded the Ghettoes, shooting the inhabitants indiscriminately and at sight. On that date all the Jewish members of the Jewish Council of Warsaw were arrested on bloc as hostages.

On July 22nd 1942, the Nazis ordered the deportation to Eastern Poland and the Ukraine of all Jews irrespective of the age and sex. The daily quota of deportees was fixed at 6,000. Later this quota was increased to 10,000. Victims were dragged from their homes or seized in the streets in organised manhunts.

Jews were congregated in the squares. Old people and invalids were driven to cemeteries and shot in droves. Others were loaded into trucks, 150 persons being crowded into the space normally holding a maximum of 40. The trucks were then driven off. Hundreds died of suffocation.

This process is now going on continuously. The floors of the trucks are covered with a thick layer of lime and chlorine sprinkled with water. The doors are locked. Often the trains remain on a siding for a day or two or longer. The fumes of lime and chlorine, the lack of air, water and food, cause hundreds of deaths, with the result that dead and living remain packed side by side.

On arrival at their destination, 50% of the deportees were found dead. The remainder were taken to the special camps of Treblinka, Belzec and Selibor, where they were shot. Neither children nor babies were spared. By the end of September 1942, 250,000 Jews had been thus exterminated.

The deportations are described by the Nazis as “the re-settlement of the Jews”. The “re-settlement” is a final one in the sense that few, if any, of the “re-settled” Jews remain alive.

In March 1942, according to official German statistics, there were 433,000 Jews packed into the Ghetto – the area walled off by the Nazis which formerly contained about 200,000 Jews.

According to ‘Arbeitsamt’ – the official Nazi Labour journal – only 40,000 Jews are to be left in the Warsaw Ghetto. These are the highly-skilled workers who the Nazis require for their war industry.

The same process of elimination and massacre is going on in all the other Ghettoes of Poland. The reports state that the Ghetto of Lodz which formerly contained about 250,000 Jews has been entirely cleared of Jews.

Besides the Firing Squads, the Nazis are now facilitating mass executions by the use of electrocution and lethal gas chambers in which Jews are crowded and ‘eliminated’.

An electrocution station has been installed at the Belzec Camp. Transports of deportees are de-trained near the execution place, sheds with a metal plated floor. The sheds are then locked and an electrical current passed through the metal plates. Death is almost instantaneous.

A large digging machine for mass graves has been recently installed at Treblinka.

The Germans have organised special Extermination Squads – Vernichtungskolonne – whose task is to round up and kill Jews on sight. The Squads fire indiscriminately into windows of Jewish houses.

The above summary takes no account of suicides, the insanities of mothers whose children are seized or murdered, and the innumerable outrages and atrocities resulting in the deaths of many thousands of Jewish men and women.