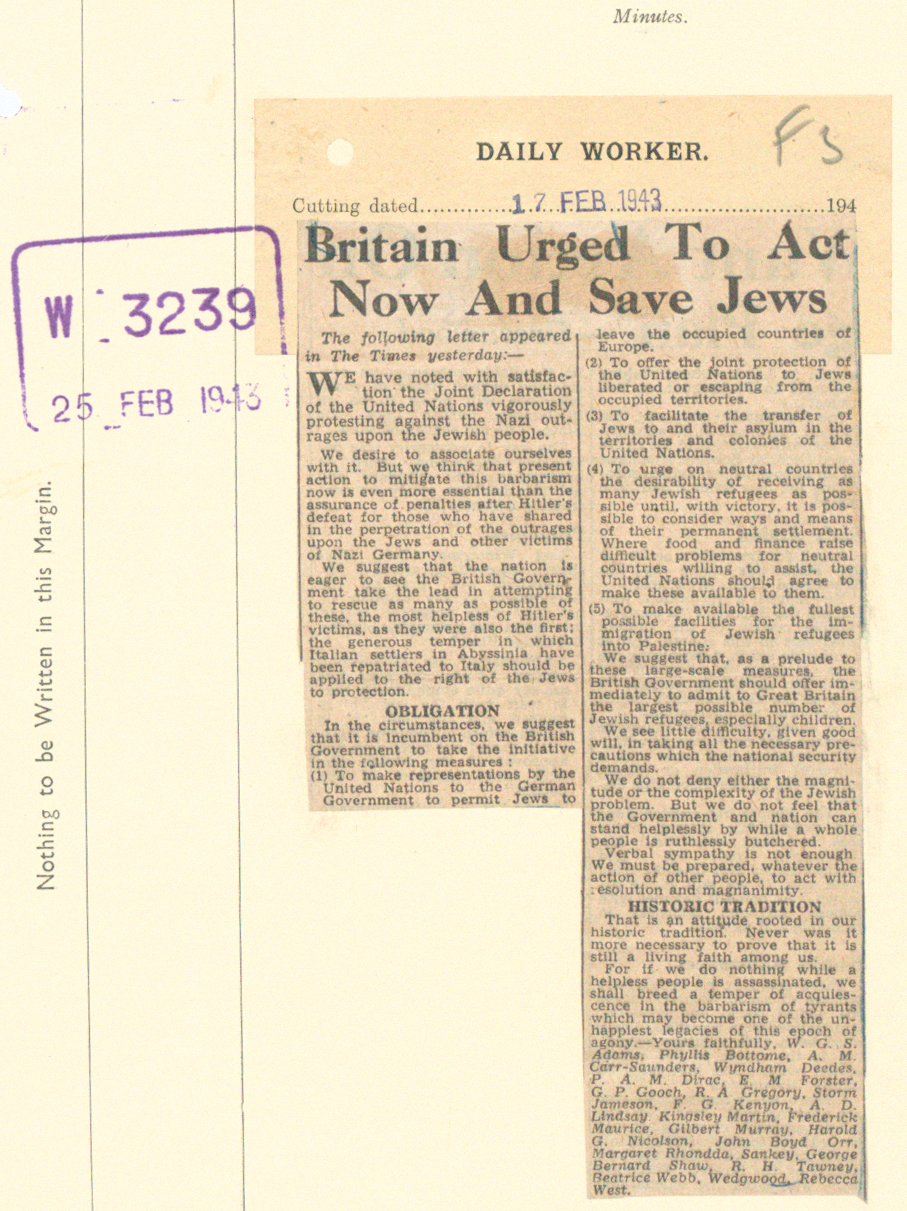 Britain Urged To Act Now and Save Jews

The following letter appeared in the Times yesterday: –

We have noted with satisfaction the Joint Declaration of the United Nations vigorously protesting against the Nazi outrages upon the Jewish people.

We desire to associate ourselves with it. But we think that present action to mitigate this barbarism now is even more essential that the assurance of penalties after Hitler’s defeat for those who have shared in the perpetration of the outrages upon the Jews and other victims of Nazi Germany.

We suggest that the nation is eager to see the British Government take the lead in attempting to rescue as many as possible of these, the most helpless of Hitler’s victims, as they were also the first; the generous temper in which Italian settlers in Abyssinia have been repatriated to Italy should be applied to the right of the Jews to protection.

In the circumstances, we suggest that it is incumbent on the British Government to take the initiative in the following measures:

We suggest that, as a prelude to these large-scale measures, the British Government should offer immediately to admit to Great Britain the largest possible number of Jewish refugees, especially children.

We see little difficulty, given good will, in taking all the necessary precautions which the national security demands.

We do not deny either the magnitude or the complexity of the Jewish problem. But we do not feel that the Government and nation can stand helplessly by while a whole people is ruthlessly butchered.

Verbal sympathy is not enough. We must be prepared, whatever the action of other people, to act with resolution and magnanimity.

That is an attitude rooted in our historic tradition. Never was it more necessary to prove that it is still a living faith among us.

For if we do nothing while a helpless people is assassinated, we shall breed a temper of acquiescence in the barbarism of tyrants which may become one of the unhappiest legacies of this epoch of agony. – Yours faithfully, W.G.S Adams, Phyllis Bottome, A.M. Carr-Saunders, Wyndham Deedes, P.A.M. Dirac, E.M.Forster, G.P.Gooch, R.A.Gregory, Storm Jameson, F.G.Kenyon, A.D.Lindsay, Kingsley Martin, Frederick Maurice, Gilbert Murray, Harold G. Nicolson, John Boyd Orr, Margaret Rhondda, Sankey. George Bernard Shaw, R.H. Tawney, Beatrice Webb, Wedgwood, Rebecca West.