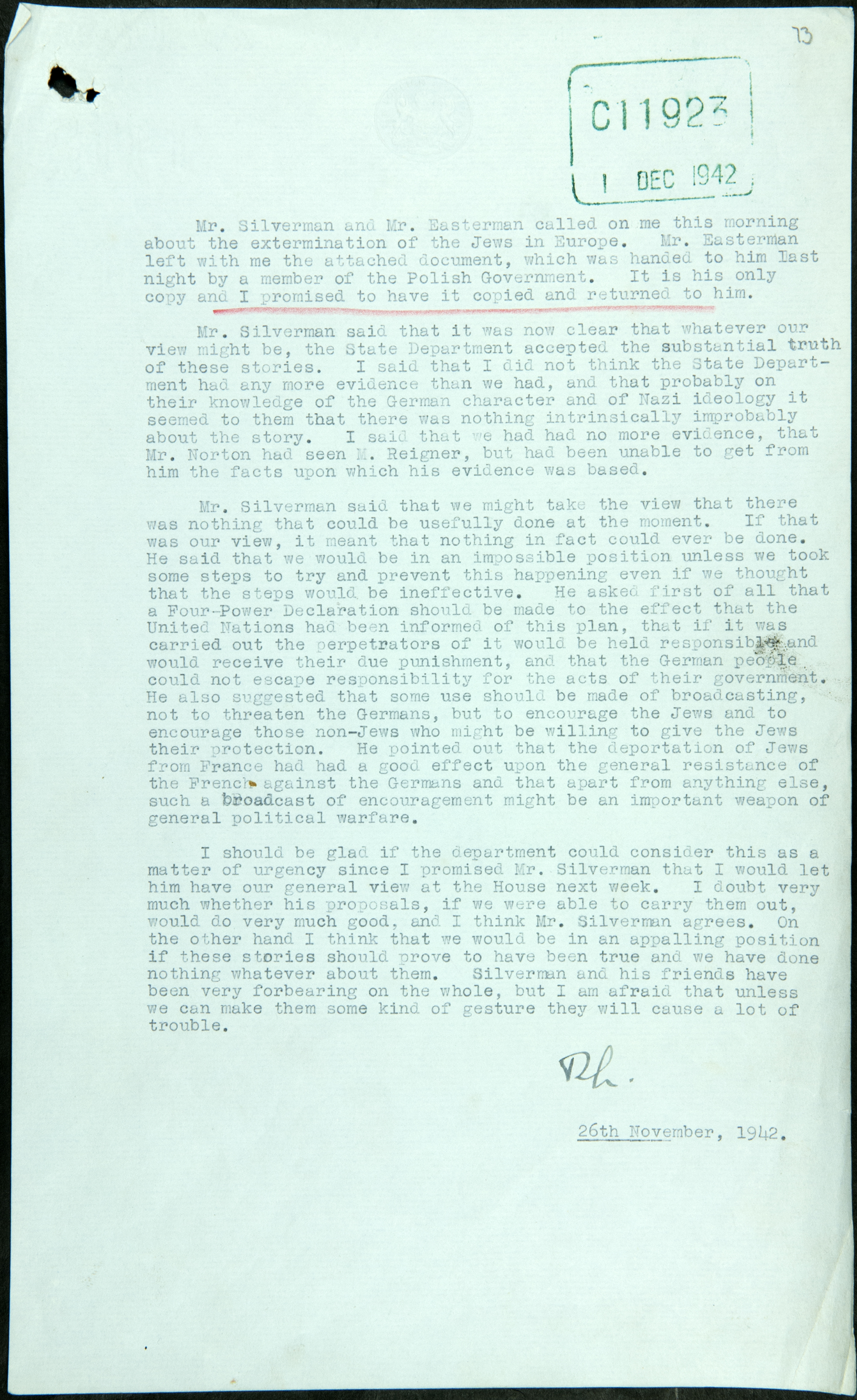 Mr. Silverman and Mr. Easterman called on me this morning about the extermination of the Jews in Europe. Mr. Easterman left with me the attached document, which was handed to him last night by a member of the Polish Government. It is his only copy and I promised to have it copied and returned to him.

Mr. Silverman said that it was now clear that whatever our view might be, the State Department accepted the substantial truth of these stories. I said that I did not think the State Department had any more evidence than we had, and that probably on their knowledge of the German character and of Nazi ideology it seemed to them that there was nothing intrinsically improbably [sic] about the story. I said that we had had no more evidence, that Mr. Norton had seen M. Reigner, but had been unable to get from him the facts upon which his evidence was based.

Mr. Silverman said that we might take the view that there was nothing that could be usefully done at the moment. If that was our view, it meant that nothing in fact could ever be done. He said that we would be in an impossible position unless we took some steps to try and prevent this happening even if we thought that the steps would be ineffective. He asked first of all that a Four-Power Declaration should be made to the effect that the United Nations had been informed of this plan, that if it was carried out the perpetrators of it would be held responsible and would receive their due punishment, and that the German people could not escape responsibility for the acts of their government. He also suggested that some use should be made of broadcasting, not to threaten the Germans, but to encourage the Jews and to encourage those non-Jews who might be willing to give the Jews their protection. He pointed out that the deportation of Jews from France had had a good effect upon the general resistance of the French against the Germans and that apart from anything else, such a broadcast of encouragement might be an important weapon of general political warfare.

I should be glad if the department could consider this as a matter of urgency since I promised Mr. Silverman that I would let him have our general view at the House next week. I doubt very much whether his proposals, if we were able to carry them out, would do very much good, and I think Mr. Silverman agrees. On the other hand I think that we would be in an appaling position if these stories should prove to have been true and we have done nothing about them. Silverman and his friends have been very forbearing on the whole, but I am afraid that unless we can make them some kind of gesture they will cause a lot of trouble.