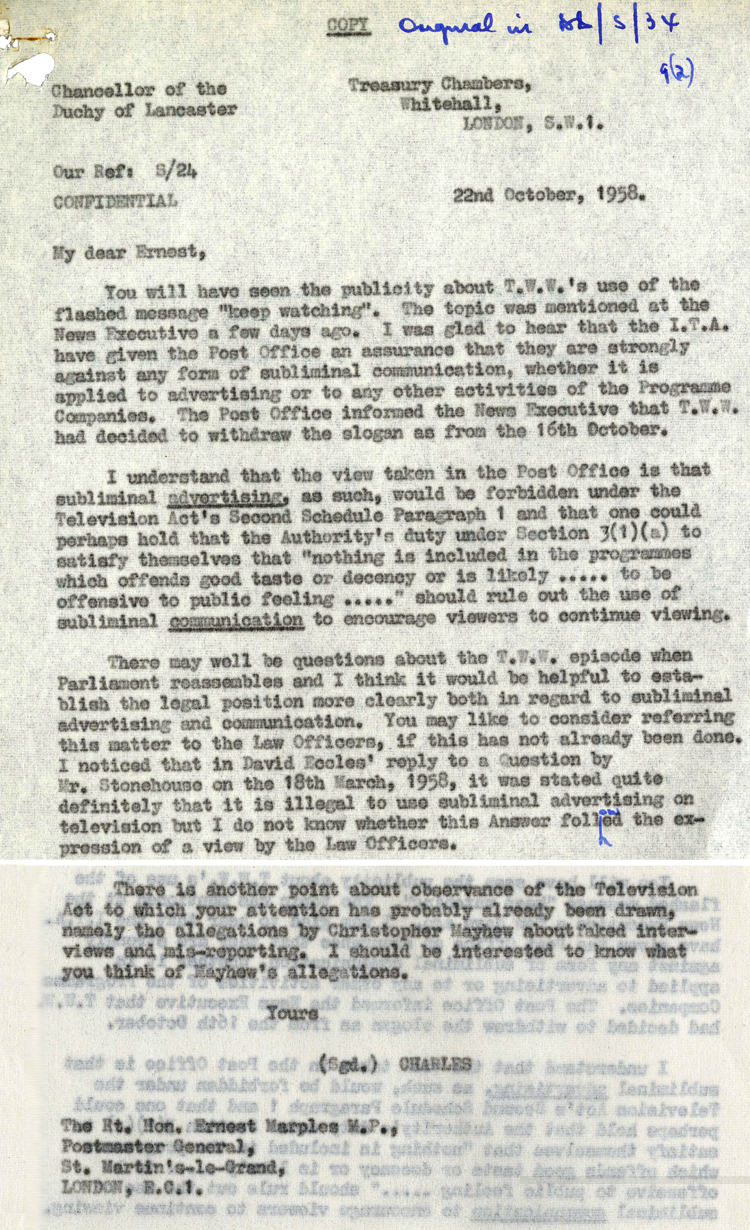 Letter to the Postmaster General from the Chancellor of the Duchy of Lancaster, 22nd October 1958 (HO 256/607)

TWW was Television Wales and the West, the newly established ITV company for the region. The ITA was the Independent Television Authority, the body set up to create and regulate television stations independent from the BBC in 1954.

Chancellor of the Duchy of Lancaster

You will have seen the publicity about T.W.W.’s use of the flashed message “keep watching”. The topic was mentioned at the News Executive a few days ago. I was glad to hear that the I.T.A. had given the Post Office an assurance that they are strongly against any form of subliminal communication, whether it is applied to advertising or to any other activities of the Programme Companies. The Post Office informed the News Executive that T.W.W. had decided to withdraw the slogan as from the 16th December.

I understand that the view taken in the Post Office is that subliminal advertising, as such, would be forbidden under the Television’s Act Second Schedule Paragraph 1 and that one could perhaps hold that the Authority’s duty under Section 3 (1) (a) to satisfy themselves that “nothing is included in the programmes which offends good taste or decency or is likely….to be offensive to public feeling…” should rule out the use of subliminal communication to encourage viewers to continue viewing.

There may well be questions about the T.W.W. episode when Parliament reassembles and I think it would be helpful to establish the legal position more clearly both in regard to subliminal advertising and communication. You make like to consider referring this matter to the Law officers, if this has not already been done. I noticed that in David Eccles’ reply to a Question by Mr. Stonehouse on the 18th March, 1958, it was stated quite definitely that it is illegal to use subliminal advertising on television but I do not know whether this Answer followed the expression of a view by the Law Officers.

There is another point about observance of the Television Act to which your attention has probably already been drawn, namely the allegations by Christopher Mayhew about faked interviews and mis-reporting. I should be interested to know what you think of Mayhew’s allegations.