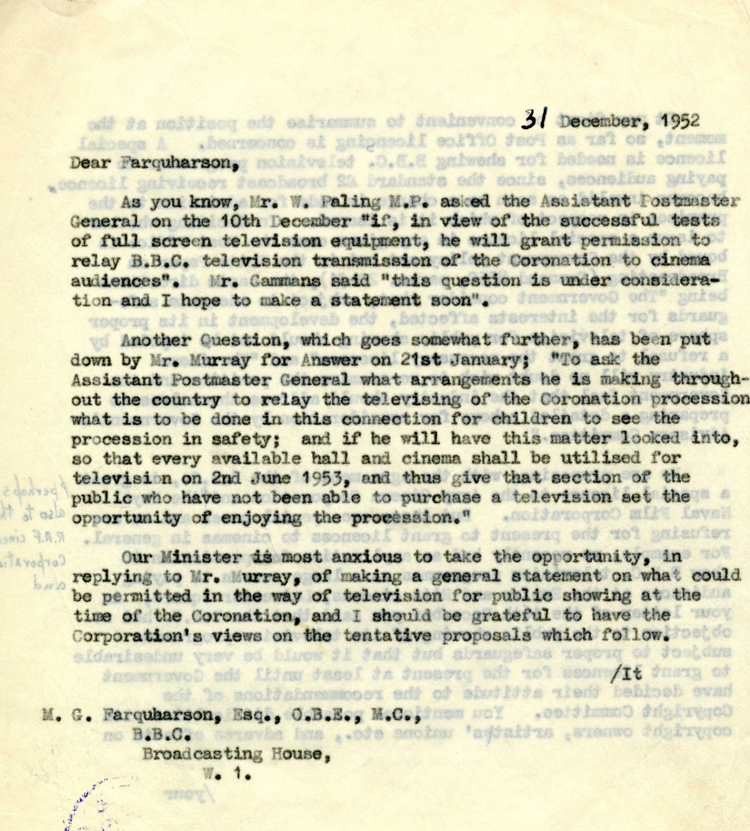 Extract from a letter to the BBC from the Overseas Telecommunications Department, 31st December 1952 (HO 256/323)

As you know, Mr. W. Paling M.P. asked the Assistant Postmaster General on the 10th of December “if, in view of the successful tests of full screen television equipment, he will grant permission to relay B.B.C. television transmission of the Coronation to cinema audiences”. Mr Gammans said “this question is under consideration and I hope to make a statement soon”.

Another Question, which goes somewhat further, has been put down by Mr. Murray for Answer on 21st January; “To ask the Assistant Postmaster General what arrangements he is making throughout the country to relay the televising of the Coronation procession; what is to be done in this connection for children to see the procession in safety; and if he will have this matter looked into, so that every available hall and cinema should be utilised for television on 2nd June 1953, and thus give that section of the public who have not been able to purchase a television set the opportunity of enjoying the procession.”

Our Minister is most anxious to take the opportunity, in replying to Mr Murray, of making a general statement on what could be permitted in the way of television for public showing at the time of the Coronation, and I should be grateful to have the corporation’s views on the tentative proposals which follow.