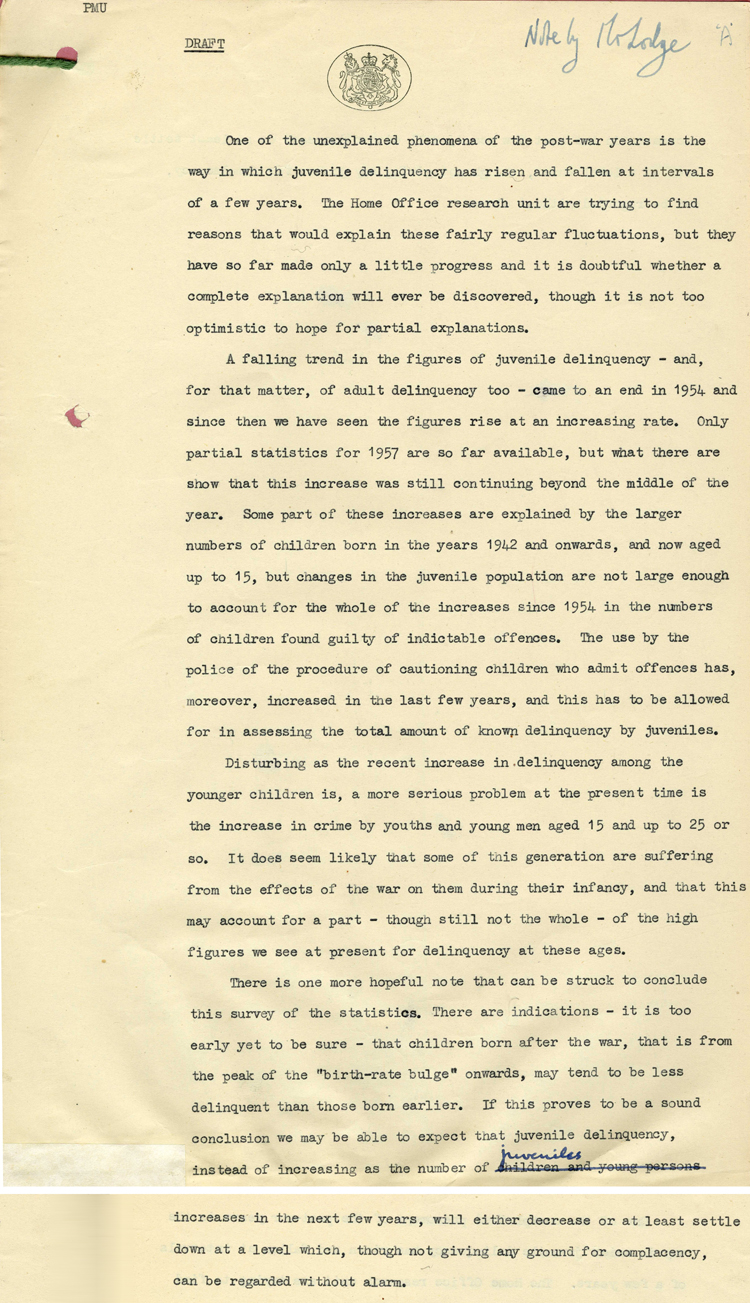 Extract from a draft speech from the Parliamentary Under Secretary of State in response to a Parliamentary question calling attention to juvenile crime and delinquency in England and Wales, 31st January 1958 (BN 29/1762)

One of the unexplained phenomena of the post-war years is the way in which juvenile delinquency has risen and fallen at intervals of a few years. The Home Office research unit are trying to find reasons that would explain these fairly regular fluctuations, but they have so far made only a little progress and it is doubtful whether a complete explanation will ever be discovered, though it is not too optimistic to hope for partial explanations.

A falling trend in the figures of juvenile delinquency-and, for that matter, of adult delinquency too- came to an end in 1954 and since then we have seen the figures rise at an increasing rate. Only partial statistics for 1957 are so far available, what there are, show that this increase was still continuing beyond the middle of the year. Some part of these increases are explained by the larger numbers of children born in the years 1942 and onwards, and now aged up to 15, but changes in the juvenile population are not large enough to account for the whole increases since 1954 in the numbers of children found guilty of indictable offences. The use by the police of the procedure of cautioning children who admit offences has moreover, increased in the last few years, and this has to be allowed for in assessing the total amount of known delinquency by juveniles.

Disturbing as the recent increase in delinquency among the younger children is, a more serious problem at the present time is the increase in crime by youths and young men aged 15 and up to 25 or so. It does seem likely that some of this generation are suffering from the effects of the war on them during their infancy, and that this may account for a part- though still not the whole- of the high figures we see at present for delinquency at these ages.

There is one more hopeful note that can be struck to conclude this survey of the statistics. There are indications-it is too early yet to be sure-that children born after the war, that is from the peak of the “birth rate bulge” onwards, may tend to be less delinquent than those born earlier. If this proves to be a sound conclusion we may be able to expect that juvenile delinquency, instead of increasing as the number of juveniles increases in the next few years, will either decrease or at least settle down at a level which, though not giving any ground for complacency, can be regarded without alarm.