Elizabeth I to James VI of Scotland, 1593 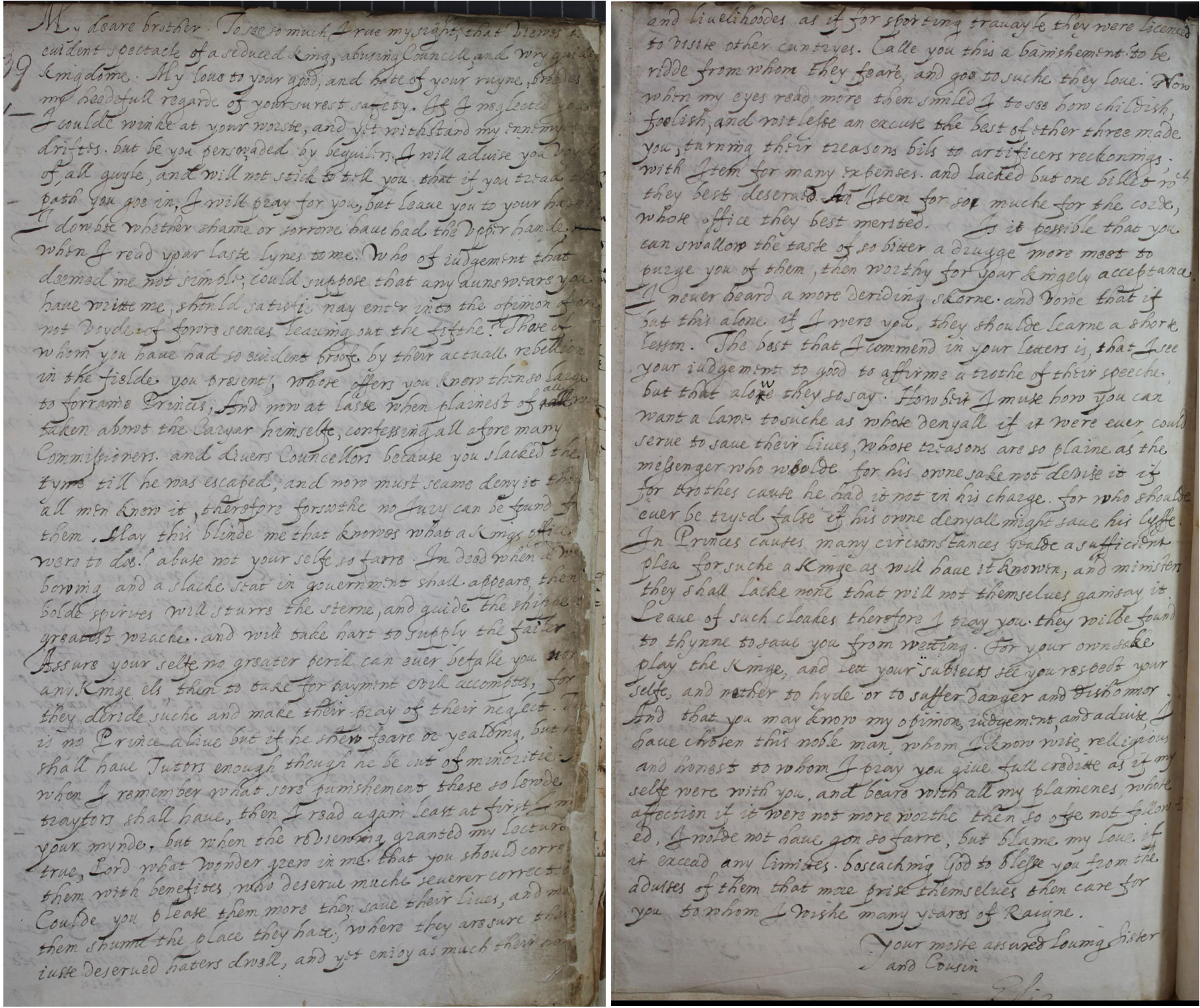 Edward de la Zouche, Baron Zouche of Harringsworth, was Elizabeth’s last emissary to James. He was granted an audience with the King of Scots on 15 January 1594, which is probably when this letter was delivered. In it, Elizabeth complains of James’s leniency towards the earls of Huntly, Errol and Angus, who were known to be in league with her chief enemy, Spain. The earls had also been implicated in the affair of the ‘Spanish blanks’, a Catholic plot by the Scottish Jesuits to welcome 30,000 Spanish troops from the Netherlands in Scotland, 4,000 of which were to establish Catholic control there and the rest were to advance south to England. The name of the plot derives from the fact that several of James’s Catholic earls had signed blank letters that gave carte blanche to the Spaniards.

My deare brother. To see so much I rue my sight, that viewes the evident spectacle of a seduced king, abusing Councill, and wry guided kingdome. My love to your good, and hate of your ruyne [ruin], breedes my heedefull regarde of your surest safety.  If I neglected you I coulde winke at your worste, and yet withstand my ennemyes driftes. But be you perswaded by beguilers, I will advise you voyde of all guyle [guile], and will not stick to tell you that if you tread the path you goe in, I will pray for you, but leave you to your harms. I dowbte whether shame or sorrowe have had the upper hande, when I read your laste lynes to me. Who of judgement that deemed me not simple, could suppose that any aunswears you have writte me, should satisfie nay enter into the opinion of one not voyde of sences leaving out the fifthe? Those of whom you have had so evident proofe by their actuall rebellion in the fielde you present [probably ‘preserve’], whose offers you knew then so large to forraine Princes, And now at laste when plainest of all was taken abowt the Caryer himselfe [George Ker, the messenger in the ‘Spanish blanks’ affair], confessing all afore many Commissioners and divers Councellors because you slacked the tyme till he was escaped, and now must seame deny it though all men knew it, therefore forsoothe no Jury can be found for them.  May this blinde me that knowes what a Kings office were to doe? Abuse not your selfe so farre. In deed when a weake bowing and a slacke seat in government shall appeare, then bolde spirites will sturre the sterne, and guide the shippe to greatest wrecke, and will take hart to supply the failer [failure]. Assure your selfe no greater perill can ever befalle you nor any King eels, then to take for payment evill accomptes, for they deride suche and make their pray of their neglect. There is no Prince alive but if he shew feare or yealding, but he shall have Tutors enough though he be out of minoritie. And when I remember what sore punishement these so lewde traytors shall have, then I read again least at first I mistook your mynde, but when the reviewing granted my lecture true, Lord what wonder grew in me that you should correct them with benefites, who deserve muche severer correction. Coulde you please them more then save their lives, and make them shunne the place they hate? Where they are sure their juste deserved haters dwell, and yet enjoy as much their honors and livelihoodes as if for sporting travayle [travel] they were licenced to visite other cuntryes. Calle you this a banishment? To be ridde from whom they feare, and goe to suche they love. Now when my eyes read more then smiled I to see how childish, foolish, and witlesse an excuse the best other three made you, turning their treasons bils [bills] to artificers reckonings; with item for many expenses. And lacked but one billet which they best deserved – An item for so muche for the corde, whose office they best merited. Is it possible that you can swallow the taste of so bitter a drugge more meet to purge you of them; then worthy for your kingely acceptance. I never heard a more deriding skorne and vowe that if but this alone if I were you, they shoulde learne a shorte lesson. The best that I commend in your letters is, that I see your judgement to good to affirme a trothe of their speeche, but that allow they so say. Howbeit I muse how you can want a lawe to suche as whose denyall if it were ever, could serve to save their lives, whose treasons are so plaine as the messenger who woulde for his owne sake not devise it if for trothes cause he had it not in his charge. For who shoulde ever be tryed false if his owne denyall might save his lyffe. In Princes causes many circumstances yealde a sufficient plea for suche a Kinge as will have it knowen, and ministers they shall Lacke none that will not themselves gainsay it. Leave of [off] such cloakes therefore I pray you – they wilbe found to [too] thynne [thin] to save you from wetting. For your own sake play the Kinge, and let your subjects see you respect your selfe, and nether to hyde or to suffer danger and dishonnor. And that you may know my opinion, judgement, and advise, I have chosen this noble man, whom I know wise, relligious, and honest to whom I pray you give full creditte as if my selfe were with you, and beare with all my plainenes, whose affection if it were not more worthe then so ofte not followed, I wolde not have gon so farre, but blame my love if it excead any limittes. Beseaching God to blesse you from the advises of them that more prise themselves then care for you to whom I wishe many yeares of Raigne.