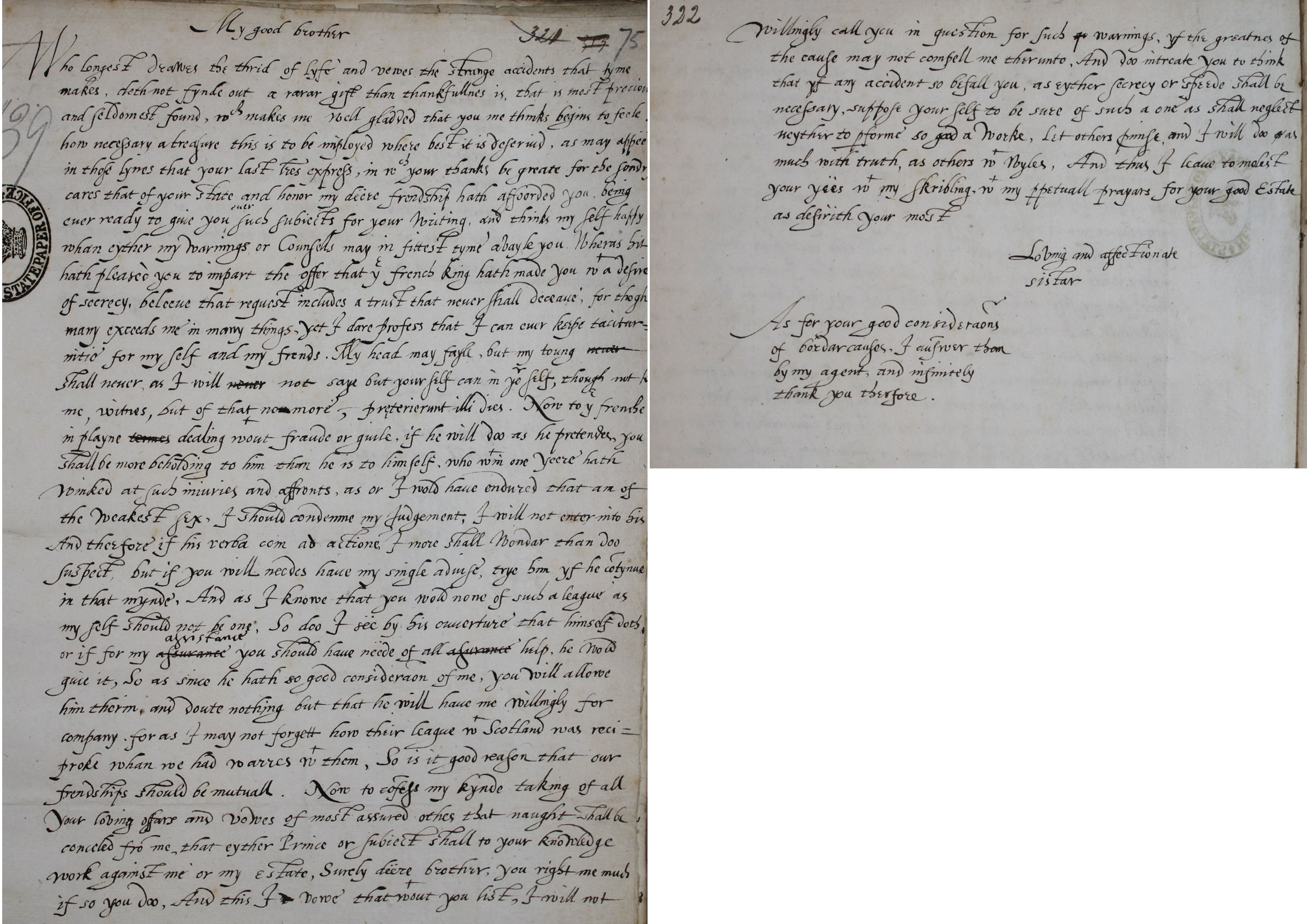 This letter is an affirmation of her friendship towards the King of Scots, and also concerns a proposed league of their two kingdoms with France against Spain. The King of France, Henry IV, had sent an ambassador to James that summer to broach the matter. Although England and France had traditionally been rivals, Henry was a great admirer of Elizabeth, and is reported to have remarked on her superior skill in suppressing rebels against the crown: ‘She only is a king! She only knows how to rule.’ By the closing years of her reign, Elizabeth had finally won not just acceptance but respect as a female sovereign in a man’s world.

My good Brother. Who longest drawes the thryd [thread] of life, and viewes the strange accidents that Tyme makes doth not fynd out a rarer gift than thanckfulnes is, that is most pretious and seldomest found, which makes me well gladded that you me thinkes beginnes to feele, howe necessary a Treasure this is to be imployed where best it is deserved, as may appeare in those lynes that your last letters express, in which your thanckes be great for the sondry cares that of your state and honour my dere friendshipp hath afforded you being ever ready to give you ever such subjects for your wrytinge, and thinckes my self happie, when ether my warnings or counsells may in fittest tyme avayle you. Wheras it hath pleased you to impart the offer that the French King hath made you with a disyre of secresie, believe that request includes a trust, that never shall deceave; for thoughe many exceed me in many thinges, yet I dare professe, that I can ever kepe taciturnity for my self and my freindes. My hedd may faile but my tounge shall never, as I will not say but your self can in your selfe thoughe not to me wytnes: but of that no more, preterierunt illi dies [‘those days will be past’]. Nowe to the Frenche in playne dealing without fraude or guile, if he will doe as he pretends, you shalbe more beholdinge to hym then he is to himself, who within one yeare hathe wyncked at suche injuries and affronts as or [ere] I would have indured that am of weakest sex I should condemne my Judgement, I will not enter into his, And therefore if his verba come ad Actionem [‘words come to action’], I more shall wonder then doe suspect, but if you will needes have my single advice, try hym if he contynue in that mynde; And as I knowe that you would none of suche a league as my self should not be one, so doe I see by his ouvreture, that hymself doth, or if for my assistance you should need of all help he would give it; so as synce he hath so good consideration of me you will allowe hym therein, and doubt nothing but that he will have me willingly for Company. For as I may not forgett howe their League with Scotland was recyproke when wee had warres with them: so is it good reason that our freindships should be mutuall. Nowe to confesse my kind taking of all your loving offers and vowes of most assured oathes that nought shalbe concealed from me, that ether Prynce or subject shall to your knowledge worck against me or my estate; surely (dere brother) you right me muche if so you doe. And this I vowe that without you list, I will not willingly call you in questoon for suche warninges, if the greatnes of your cause may not counsell me thereunto, And do intreat you to thincke that if any accydent so befall you, as ether secrecy or speed shalbe necessary, suppose your self to be sure of suche a one as shall neglect neyther to performe so good a worck; let others promise and I will do as muche with truth as others with wyles, And thus I leave to molest your eyes with my scribling with my perpetuall prayers for your good estate as desyreth your most loving and affectionat syster.

[postscript] As for your good considerations of border causes I aunswere you by my Agent and infinitely thanck you therefore.