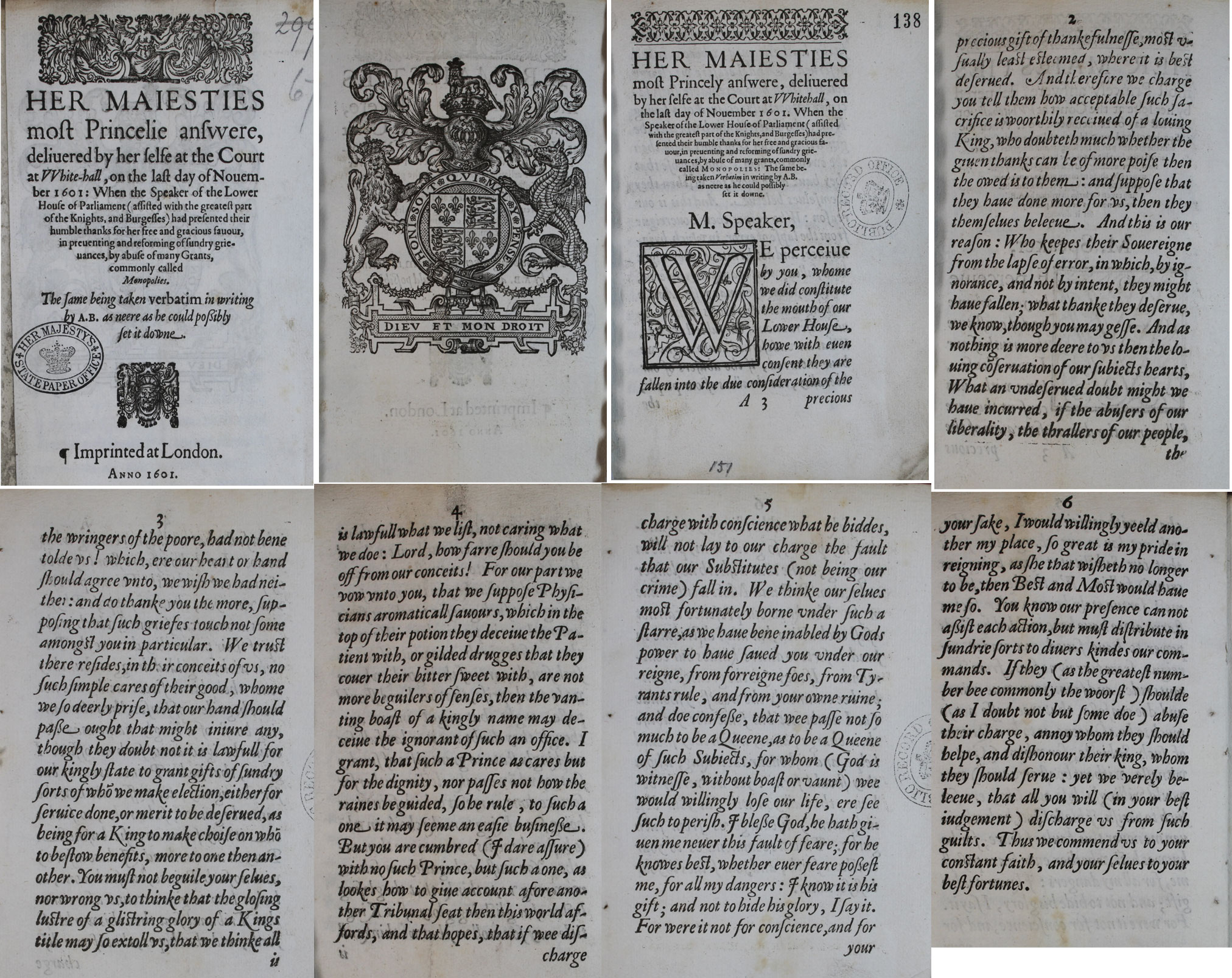 On 30 November 1601, Elizabeth addressed 141 Members of the House of Commons (including the Speaker) in what would be her last Parliament. Her speech was expected to address their concerns about pricing, based on the recent economic issues facing the country. But to everyone’s surprise, Elizabeth instead used the occasion to express the love she felt for her subjects, and how she viewed her position as their queen. This version of what became known as the ‘Golden Speech’ was recorded by one who was in attendance. Printed with the royal arms as its frontispiece, it may have been the ‘official’ version of the speech, published under the auspices of the court. It is more of a summary than a transcription, and may have stimulated others who were present to produce their own more detailed accounts of the speech.

Her Majesties most Princelie answere, delivered byher selfe at the Court of Whitehall, on the last day of November 1601: When the Speaker of the Lower House of Parliament (assisted with the greatest part of the Knights, and Burgesses) had presented their humble thanks for her free and gracious favour, in preventing and reforming of sundry grievances, by abuse of many Grants, commonly called Monopolies. The same being taken verbatim in writing by A.B. [possibly Anthony Blagrave] as neere as he could possibly set it downe.

Mr Speaker, we perceive by you, whome we did constitute the mouth of our Lower House, howe with even consent they are fallen into the due consideration of the precious gift of thankefulnesse, most usually least esteemed, where it is best deserved. And therefore we charge you tell them how acceptable such sacrifice is woorthily received of a loving King, who doubteth much whether the given thanks can be of more poise [i.e. weight] then the owed is to them: and suppose that they have done more for us, then they themselves beleeve. And this is our reason: Who keepes their Sovereigne from the lapse of error, in which, by ignorance, and not by intent, they might have fallen; what thankes they deserve, we know, though you may gesse. And as northing is more deere unto us then the loving conservation of our subjects hearts, what an undeserved doubt might we have incurred, if the abusers of our liberality, the thrallers of our people, the wringers of the poore, had not bene tolde us! Which, ere our heart or hand should agree unto, we wish we had neither: and do thanke you the more, supposing that such griefes touch not some amongst you in particular. We trust there resides, in their conceits of us, no such simple cares of their good, whome we so deerly prize, that our hand should passe ought that might injure any, though they doubt not it is lawfull for our kingly state to grant gifts of sundry sorts of whom we make election, either for service done, or merit to be deserved, as being for a King to make choise on whom to bestow benefits, more to one then another. You must not beguile your selves, nor wrong us, to thinke that the glosing lustre of a glistring glory of a Kings title may so extoll us, that we thinke all is lawfull what we list, not caring what we doe: Lord, how farre should you be off from our conceits! For our part we vow unto you, that we suppose Physicians aromaticall favours, which in the top of their potion they deceive the Patient with, or gilded drugges that they cover their bitter sweet with, are not more beguilers of senses, then the vanting [vaunting] boast of a kingly name may deceive the ignorant of such an office. I grant, that such a Prince as cares but for the dignity, nor passes not how the raines be guided, so he rule, to such a one it may seeme an easie businesse. But you are cumbred (I dare assure) with no such Prince, but such a one, as lookes how to give account afore another Tribunal seat then this world affords, and that hopes, that if wee discharge with conscience what he biddes, will not lay to our charge the fault that our Substitutes (not being our crime) fall in. We thinke our selves most fortunately borne under such a starre, as we have bene inabled by Gods power to have saved you under our reigne, from forreigne foes, from Tyrants rule, and from your owne ruine; and doe confesse, that wee passe not so much to be a Queene, as to be a Queene of such Subjects, for whom (God is witnesse, without boast or vaunt) wee would willingly lose our life, ere see such to perish. I blesse God, he hath given me never this fault of feare; for he knowes best, whether ever feare possest me, for all my dangers: I know it is his gift; and not to hide his glory, I say it. For were it not for conscience, and for your sake, I would willingly yeeld another my place, so great is my pride in reigning, as she that wisheth no longer to be, then Best and Most would have me so. You know our presence can not assist each action, but must distribute in sundrie sorts to divers kindes our commands. If they (as the greatest number bee commonly the woorst) shoulde (as I doubt not but some doe) abuse their charge, annoy whom they should helpe, and dishonour their king, whom they should serve: yet we verely beleeve, thatall you will (in your best judgement) discharge us from such guilts. Thus we commend us to your constant faith, and your selves to your best fortunes.