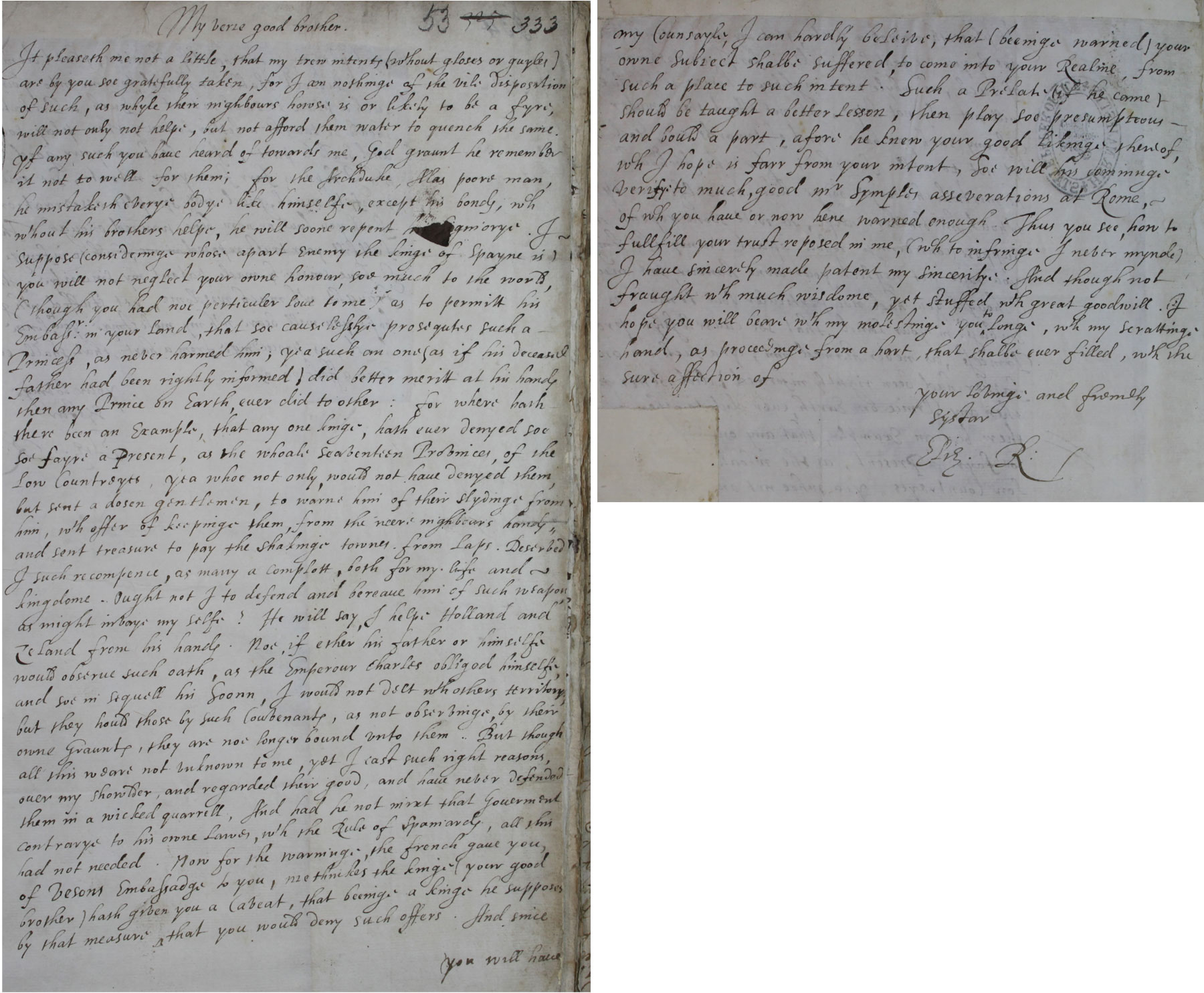 This is the last known letter written by Elizabeth to the man whom she knew would succeed her. Conciliatory in tone, it provides a justification for her foreign policy, notably the defence of the Dutch rebels against Spain – an alliance that she no doubt hoped James would uphold when he became king of England. Even though Elizabeth herself, and the vast majority of her subjects, knew that James would soon take the throne, even now, in the last few weeks of her life, she refused to name him her heir. Shortly after writing this letter, she retreated to her ‘warm box’, Richmond Palace, to live out her days. Only on her deathbed, when pressed by a minister to formally name the King of Scots as her heir, did she draw a circlet above her head to indicate assent.

It pleaseth me not a little, that my trew intents (without gloses or guyles) are by you soe gratefully taken, for I am nothinge of the vile disposition of such,as whyle their nighbours howse is or likely to be a fyre, will not only not helpe, but not afford them water to quench the same. Yf any such you have heard of towards me, God graunt he remember it not to well for them; for the Archduke [of Austria] Alas poore man, he mistaketh everye bodye like himselfe, except his bonds, which without his brothers helpe, he will soone repent… I suppose (consideringe whose apart enemy the kinge of Spayne is) you will not neglect your owne honour, soe much to the world, (though you had noe perticuler love to me) as to permitt his Embassador in your land, that soe cause […] prosequtes such a Princess, as never harmed him; yea such an one as if his deceased father had been rightly informed) did better merit at his hands then any Prince on earth, ever did to other: for where hath there been an example, that any one kinge, hath ever denyed soe soe fayre a present, as the whoale Seaventeen Provinces, of the Low Countreyes, yea whoe not only would not have denyed them, but sent a dosen gentlemen, to warne him of their slydinge from him, with offer of keepinge them from the neere nighbours hands and sent treasure to pay the shakinge townes from […]  Deserved I such recompence, as many a complot, both for my life and kingdome. Ought not I to defend and bereave him of such weapons as might innoye my self? He will say I helpe Holland and Zeland from his handes. Noe, if ether his father or himselfe would observe such oath, as the Emperour Charles obliged himselfe and soe in sequell his soonn, I would not delt with others territory but they hould those by such couvenantes, as not observinge, by their owne grauntes, they are noe longer bound unto them. But though all this weare not unknown to me, yet I cast such right reasons, over my shoulder, and regarded their good, and have never defended them in a wicked quarrel, And had he not mixt that Government contrarye to his owne lawe, with the Rule of Spaniardes, all this had not needed. Now for the warning, the Frenche gave you, of Besons Embassadge to you, methinkes the kinge (your good brother) hath given you a caveat, that beeinge a kinge he supposes by that measure that you would deny such offers. And since you will have any counsayle, I can hardly believe, that (beeinge warned) your own subject shalbe suffered, to come into your Realme, from such a place to such intent. Such a Prelate (if he come) should be taught a better a lesson, then play soo presumptuous and bould a part, afore he knew your good liking thereof, which I hope is farr from your intent, soe will his comminge verify to much, good Mr Symples asservations at Rome, of which you have or now here warned enough. Thus you see, how to fullfill your trust reposed in me, (which to infringe I never mynde) I have sincerely made patent my sincerity. And though not fraught with much widome, yet stuffed with great goodwill. I hope you will beare with my molestinge you to [too] longe, with my seratting hand, as proceedinge from a hart, that shalbe ever filled, with the sure affection of your lovinge and frendly systar Elizabeth R: