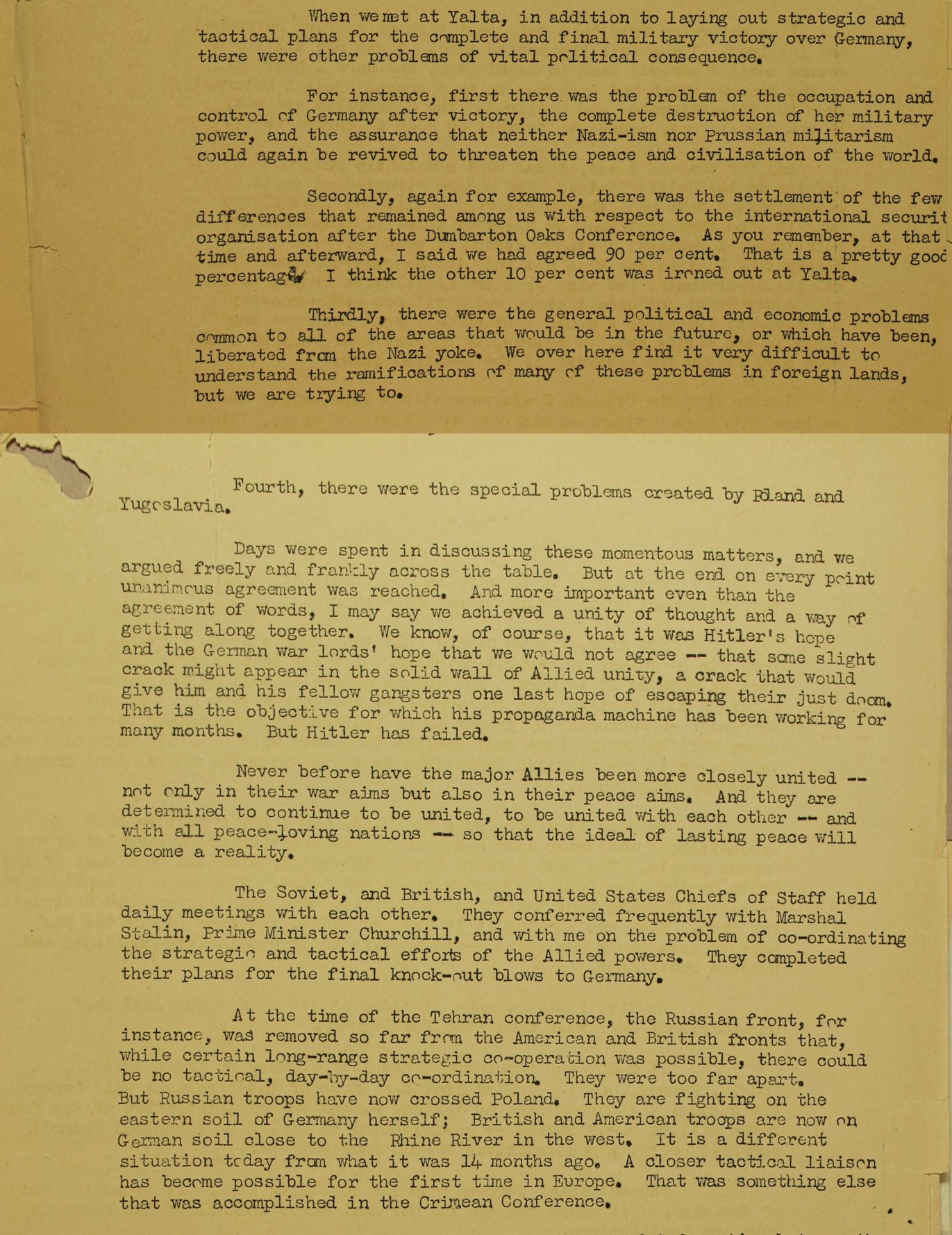 Extracts from US President Roosevelt’s speech to the US Congress on the Yalta Conference, March 1st 1945. (Catalogue ref: FO 371/50839)

When we met at Yalta, in addition to laying out strategic and tactical plans for the complete and final military victory over Germany, there were other problems of vital political consequence.

For instance, first there was the problem of occupation and control of Germany after victory, the complete destruction of her military power, and the assurance that neither Nazi-ism nor Prussian militarism could again be revived to threaten peace and civilisation of the world.

Secondly, again for example, there was the settlement of the few differences that remained among us with respect to the international security organisation after the Dumbarton Oaks Conference. As you remember, at that time and afterward, I said we had agreed 90 per cent. That is a pretty percentage. I think the other 10 per cent was ironed out at Yalta.

Thirdly, there were the general political and economic problems common to all of the areas that would be in the future, or which have been, liberated from the Nazi yoke. We over here find it very difficult to understand the ramifications of many of these problems in foreign lands, but we are trying to.

Fourth, there were the special problems created by Poland and Yugoslavia.

Days were spent in discussing these momentous matters, and we argued freely and frankly across the table. But at the end on every point unanimous agreement was reached. And more important even than the agreement of words, I may say that we achieved a unity of thought and a way of getting along together. We know, of course, that it was Hitler’s hope and the German war lords’ hope that we would not agree – that some slight crack might appear in the solid wall of allied unity, a crack that would give him and his fellow gangsters one last hope of escaping their just doom. That is the objective for which his propaganda machine has been working for many months. But Hitler has failed.

Never before have the major allies been more closely united- not only in their war aims but also in their peace aims. And they are determined to continue to be united, to be united with each other – and with all peace-loving nations – so that the ideal of lasting peace will become a reality.

The Soviet, and British, and United States Chiefs of Staff held daily meeting with each other. They conferred frequently with Marshal Stalin, Prime Minister Churchill, and with me on the problem of co-ordinating the strategic and tactical efforts of the Allied powers. They completed their plans for the final knock-out blows to Germany.

At the time of the Tehran conference, the Russian front, for instance, was removed so far from the American and British front that, while certain long-range strategic co-operation was possible, there could be not tactical, day-by-day co-ordination. They were too far apart. Burt the Russian troops have now crossed Poland. They are fighting on the eastern soil of Germany herself; British and American troops are now on German soil close to the Rhine River in the west. It is a different situation today from what it was 14 months ago. A closer tactical liaison has become possible for the first time in Europe. That was something else that was accomplished in the Crimean Conference.