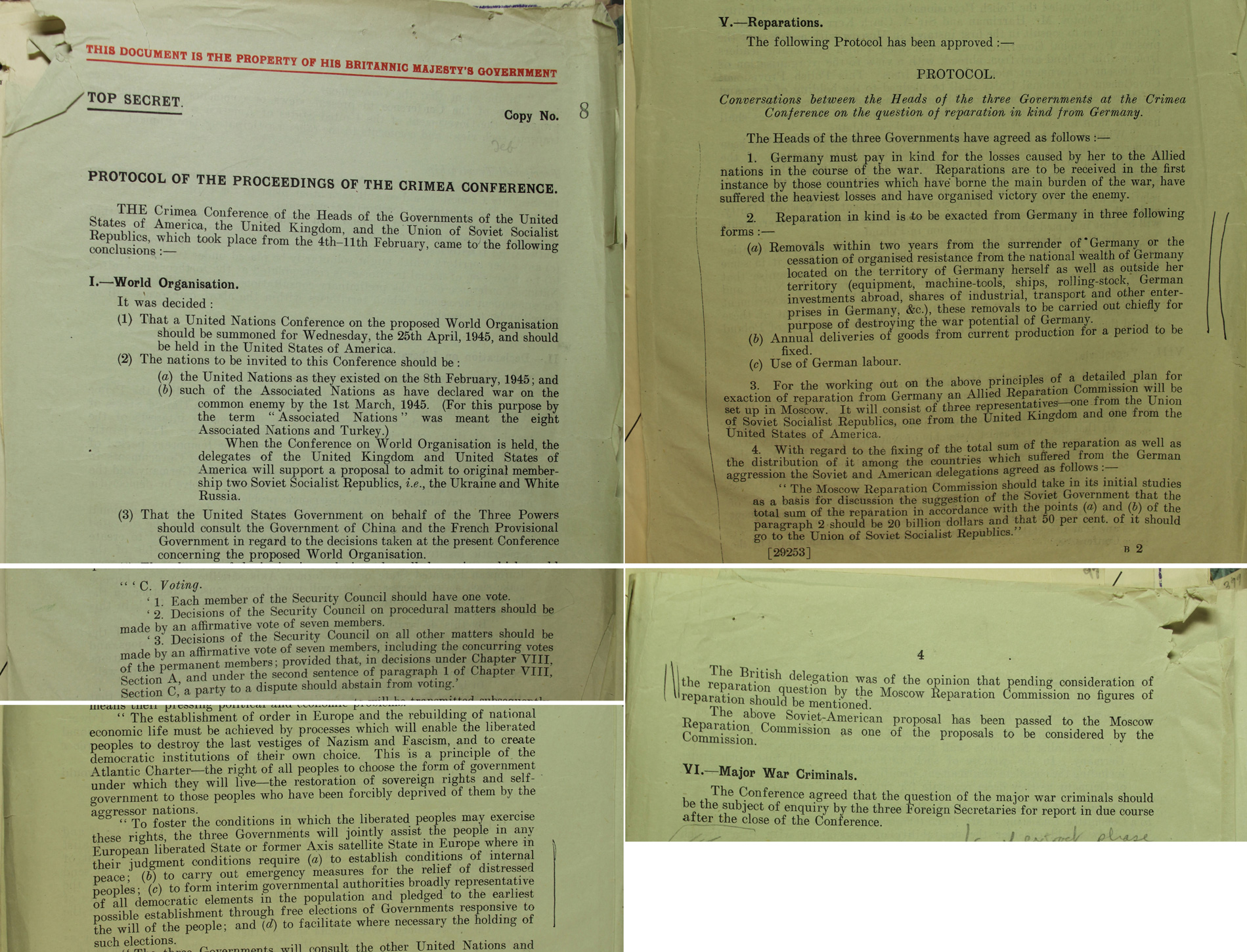 Extract from the Yalta Protocol – the agreements signed by Britain, the USA and the USSR at the Yalta Conference, February 1945 (Catalogue ref: FO 371/50838)

PROTOCOL OF THE PROCEEDINGS OF THE CRIMEA CONFERENCE

THE Crimea Conference of the Heads of the Governments of the United States of America, the United Kingdom, and the Union of Soviet Socialist Republics which took place from the 4th-11th February, came to the following conclusions-:

I.–World Organisation.
It was decided:

II. DECLARATION OF LIBERATED EUROPE
The following declaration has been approved:
…
The establishment of order in Europe and the rebuilding of national economic life must be achieved by processes which will enable the liberated peoples to destroy the last vestiges of nazism and fascism and to create democratic institutions of their own choice. This is a principle of the Atlantic Charter – the right of all people to choose the form of government under which they will live – the restoration of sovereign rights and self-government to those peoples who have been forcibly deprived of them by the aggressor nations.
To foster the conditions in which the liberated people may exercise these rights, the three governments will jointly assist the people in any European liberated state or former Axis state in Europe where, in their judgment conditions require,

V. REPARATION
The following protocol has been approved:
Protocol
On the Talks Between the Heads of Three Governments at the Crimean Conference on the Question of the German Reparations in Kind

i. Germany must pay in kind for the losses caused by her to the Allied nations in the course of the war. Reparations are to be received in the first instance by those countries which have borne the main burden of the war, have suffered the heaviest losses and have organized victory over the enemy.

ii. Reparation in kind is to be exacted from Germany in three following forms:

iv. With regard to the fixing of the total sum of the reparation as well as the distribution of it among the countries which suffered from the German aggression, the Soviet and American delegations agreed as follows:
“The Moscow reparation commission should take in its initial studies as a basis for discussion the suggestion of the Soviet Government that the total sum of the reparation in accordance with the points (a) and (b) of the Paragraph 2 should be 22 billion dollars and that 50 per cent should go to the Union of Soviet Socialist Republics.”

The British delegation was of the opinion that, pending consideration of the reparation question by the Moscow reparation commission, no figures of reparation should be mentioned. The above Soviet-American proposal has been passed to the Moscow Reparation Committee as one of the proposals to be considered by the Commission.

The Conference agreed the question of the major war criminals should be the subject of enquiry by the three Foreign Secretaries for report in due course after the close of the Conference.