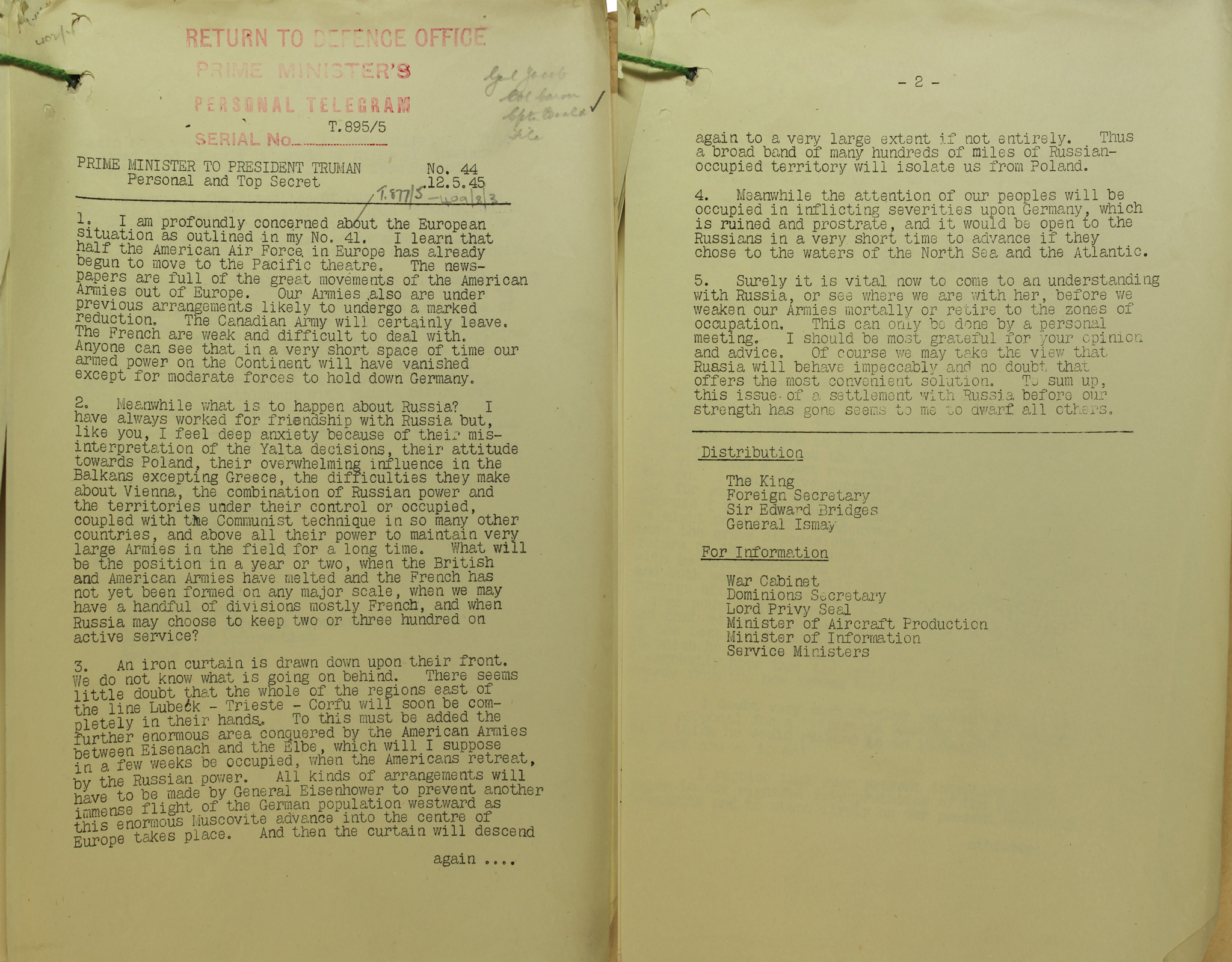 Telegram from Prime Minister Winston Churchill to US President Truman, May 12th 1945. It comments on relations between the Allies in the months after the Yalta Conference. (Catalogue ref: CAB 120/186)

1. I am profoundly concerned about the European situation as outlined in my No. 41. [An earlier telegram]. I learn that half the American Air Force in Europe has already begun to move to the Pacific theatre. The newspapers are full of the great movements of the American Armies out of Europe. Our Armies also are under previous arrangements likely to undergo a marked reduction. The Canadian Army will certainly leave. The French are weak and difficult to deal with. Anyone can see that in a very short space of time our armed power on the Continent will have vanished except for moderate forces to hold down Germany.

2. Meanwhile what is to happen about Russia? I have always worked for friendship with Russia but, like you, I feel deep anxiety because of their misinterpretation of the Yalta decisions, their attitude towards Poland, their overwhelming influence in the Balkans excepting Greece, the difficulties they make about Vienna, the combination of Russian power and the territories under their control or occupied, coupled with the Communist technique in so many other countries, and above all their power to maintain very large Armies in the field for a long time. What will be the position in a year or two, when the British and American Armies have melted and the French has not yet been formed on any major scale, when we may have a handful of divisions mostly French, and when Russia may choose to keep two or three hundred on active service?

3. An iron curtain is drawn down between their front. We do not know what is going on behind. There seems little doubt that the whole of the regions east of the line of Lubeck-Triest-Corfu will soon be completely in their hands. To this must be added the further enormous area conquered by the American Armies between Eisenach and the Elbe, which I suppose in a few weeks to be occupied, when the Americans retreat, by the Russian power. All kinds of arrangements will have to made by General Eisenhower to prevent another immense flight of the German population westward as this enormous Muscovite advance into the centre of Europe takes place. And then the curtain will descend again to a very large extent if not entirely. Thus a broadband of many hundreds of miles Russian-occupied territory will isolate us from Poland.

4. Meanwhile the attention of our peoples will be occupied in inflicting severities upon Germany, which is ruined and prostrate, and it will be open to the Russians in a very short time to advance if they chose to the waters of the North Sea and the Atlantic.

5. Surely it is vital now to come to an understanding with Russia, or see where we are with her, before we weaken our Armies mortally or retire to the zones of occupation. This can only be done by a personal meeting. I should be most grateful for opinion and advice. Of course we may take the view that Russia will behave impeccably and no doubt that offers the most convenient solution. To sum up, this issue of a settlement with Russia before our strength has gone seems to me dwarf all others.