We run a diverse range of projects to engage volunteers, covering a broad spectrum of interests.

Read about our current opportunities.

In the early winter of 2018, a small team of (eventually) four dedicated volunteers commenced the cataloguing of the final tranche of the ‘State Papers, Domestic, George II’ (i.e. the period theoretically from 1748 to the end of the monarch’s reign in 1760). While a proportion of this correspondence is written in French, there is also a miscellaneous run of papers at the end which date back to the late 17th century (such as the petition, for example, of two financially-stricken Dorset Catholic gentlewomen to William III, ‘living quietly and inoffensively’ to be excused attending Church of England services in SP 36/154/1/70).

As a volunteer-orientated project, the team released 5,033 item-level descriptions of the contents of 57 volumes in the series SP 36. The project has made Discovery catalogue descriptions (based on very brief printed manuscript summaries) available online for all to search.

The series of records itself is extremely diverse, and includes material on the post-‘Forty-five Rebellion’ (for example the SP 36/106/2/155 case of Charles Deacon, schoolboy ensign in the Jacobite Manchester Regiment); crime and punishment (which covers customs and excise matters of smuggling, and assize court indictments), trade; and the North American colonies (for example SP 36/107/2/65, ‘Expenses that were owed by the Georgia Assembly’ at Savannah in 1749 to Mary Musgrove, who became an important intermediary between the tribes of the back country interior, such as the Muscogee Creek nation and the English colonists, for example).

International diplomacy and major conflicts are also covered with the signing of the Treaty of Aix-la-Chapelle, which ended the War of the Austrian Succession in April 1748; the collection also witnessing the outbreak of the Seven Years War in 1756, which in reality was the first global struggle, and involved all the Great Powers of Europe.

Having liaised with the library to have volunteer access to the State Papers Online, this was ultimately a great achievement by the team. Completing the project ahead of schedule in less than ideal circumstances, as it worked remotely from home. The team’s sheer commitment cannot be praised enough. Celine Fernandez, in particular, deserves applause for her excellent French transcription work, as do colleagues in the catalogue and taxonomy team for their advice and help throughout the project.

A team of seven volunteers has completed a survey of Transparent Paper contained in The National Archives collection. 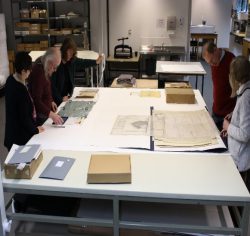 Over an 18-month to two-year period 1600 pieces suspected to contain transparent paper were surveyed. The team identified 3,000 transparent papers in 937 of the 1,600 surveyed, and recorded the condition of the most and least damaged papers within the top two most prevalent colours.

The team between them had a wide range of skills built up by working on a variety of different projects across The National Archives, and were very keen to learn about a new vulnerable collection material. During the three-month trial period they learnt more about transparent papers: how they are manufactured and used, how to handle the different types of documents they were surveying, how to carry out the assessment on the transparent paper and how to enter the information gathered onto the iPad survey. Their grasp of the project and skills already gained helped us to fine tune the questions to be answered in the survey.

Though this was perhaps a more involved and complex project than some they had worked on, or had a different of complexities, they enjoyed the experience and were quite disappointed when it finished.

We were so impressed with the work they had taken on that we nominated them for the Museums+Heritage Awards 2019 in the Volunteer(s) Team of the Year category. Sadly, they did not make the shortlist, but they were awarded a certificate of Special Recognition for volunteering.

The Navy Board project

A 20-year project to catalogue the miscellaneous correspondence of the Navy Board (responsible for building Royal Navy ships and overseeing naval dockyards) held by The National Archives in ADM 106/281-1299, covering the period 1673 to 1789, was completed in 2019 by a team of 20 volunteers.

This volunteer team prepared, sorted, foliated, summarised and checked 1,019 boxes of previously uncatalogued Navy Board miscellaneous correspondence producing over half a million letter summaries, which are now each currently fully searchable by name, keyword and date on The National Archives online catalogue Discovery, for a global audience to search. 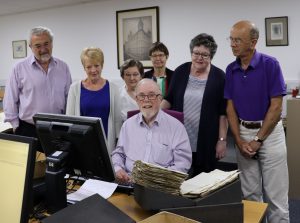 In carrying out this mammoth task these volunteers assimilated and became expert in reading and interpreting archaic ‘Navy Board speak’, developed their palaeography skills and adopted new working practices, for instance, moving from summarising the contents of these letters and  inputting their findings into word table templates, to using PROCAT, The National Archives’ editorial catalogue tool.

The Navy Board volunteer team’s cataloguing work has unearthed documents relating to such luminaries as Horatio Nelson and Sir Christopher Wren, as well as material about the struggles of women in business for equal pay. Such finds have led to media interest with articles appearing in the Sunday Telegraph and the Who Do You Think You Are? magazine.

On a practical day to day level, the value of this team’s cataloguing work saw for the period of January 2018 to May 2019, 5,575 original document productions to researchers from these 1,019 boxes of Navy Board correspondence, equating to each box being ordered five times over.

In celebrating their dedication, commitment and hard work, the Navy Board project team was selected among many other nominations as a runner-up in the ‘Best Team’ category in the 2019 London Heritage Volunteer Awards for the success of their project and for their efforts in making archives more accessible for everyone.

Over the last 12 years, volunteers have catalogued petitions for mercy from prisoners and their supporters submitted to the Home Office between 1821 and 1839. In the 19th century, a prisoner’s only avenue of relief from their sentence was to send a petition to the Home Secretary to exercise the Royal Prerogative of mercy in their favour. The HO 17 series contains nearly 20,000 petitions and related correspondence, and is a treasure trove for both academic and family historians. 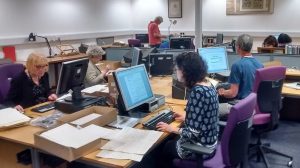 The project captured detailed information from the petitions to enhance descriptions in The National Archives’ catalogue and open up the series to researchers by making it more searchable. The series was particularly challenging as the petitions lacked formal structure; they were not referenced in chronological order and each was based on the prisoner’s individual circumstances. Petitions vary from those written formally on parchment with hundreds of signatories, to a barely literate scrawl on a torn piece of paper. The common thread, underlining their importance, is that they reveal details of the prisoner’s life, often in their own words.

Using knowledge and experience gained during the project, the volunteers have given many talks, produced numerous articles, a book and a PhD thesis and will continue to promote the series as an important resource for further understanding the criminal justice system in the early decades of the 19th century.

Using the experience we have gained in editing HO 17, we are now cataloguing the petitions in HO 18, which cover the years 1839-1853.