The National Archives holds a huge collection of official trade marks, created by British and foreign businesses between the mid-19th and mid-20th centuries. This treasure trove of thousands of designs and artworks, in the form of drawings, paintings and prints, includes everything from complex illustrations to simple logos. By following the advice in this guide you can find and see the original designs of trade marks submitted to the government for official registration.

The collection presents a rich and colourful history of British commercial graphic design, marketing and manufacturing, for both the home and overseas markets. It provides insights into the tastes and consumer habits of the United Kingdom and beyond in the Victorian, Edwardian and inter-war eras and can be used to help trace the history of specific companies and brands. 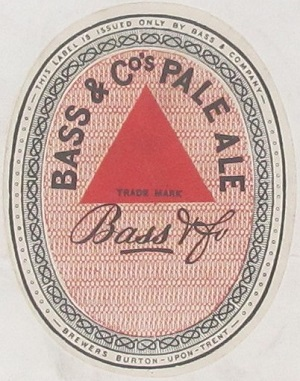 The Bass & Co. trade mark, registered in 1876. This representation is held at The National Archives in record series BT 82. The full catalogue reference for this trade mark is BT 82/1.

Among the collection you can find early logos used by British household names like Slazenger, Birds Eye, Colman, Rowntree and many others. We hold copies of countless other designs for lesser known companies, many long since out of business.

For records of trade marks registered since 1938, go to the Intellectual Property Office, known until 2007 as the Patent Office (see section 6).

A trade mark is the recognisable symbol of a specific manufacturer or brand, an assurance to consumers of the quality they can expect from a product as well as protection for the manufacturer against fraudulent copying of their products or use of their brand.

As the examples here and throughout the guide demonstrate, trade marks of the kind found in our collection are often characterized by one or more of the following features:

We hold tens of thousands of the original trade mark designs sent to Stationers’ Hall and the UK Patent Office for official registration – these designs are known as representations. 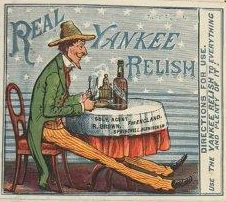 This trade mark for Real Yankee Relish was registered at the Patent Office in 1884 (catalogue reference BT 82/143, design number 35648).

Registers were used to record details of the designs and of the manufacturer or other company registering the trade mark – we hold just four of them plus two indexes. Most of the registers from this period were destroyed under section 6 of the ‘Public Records Act of 1958’.

From 1842 trade mark designs were registered at Stationers’ Hall, in the City of London, and from 1876, at the UK Patent Office. We hold records of trade marks registered at both places but they constitute separate collections.

Before the Trade Marks Registration Act of 1875 there had not been any legislation specifically covering trade marks; registration had taken place under copyright law. Records pre-dating this act, held at Stationers’ Hall, are therefore kept with the rest of our Copyright Office records – see our separate copyright records guide for advice on these records.

Some trade marks were ‘refused’ for a variety of reasons, and we hold copies of many of these refusals too.

To view the representations or registers you will need to either visit The National Archives at Kew or pay for copies to be sent to you.

4. Representations and how to locate them 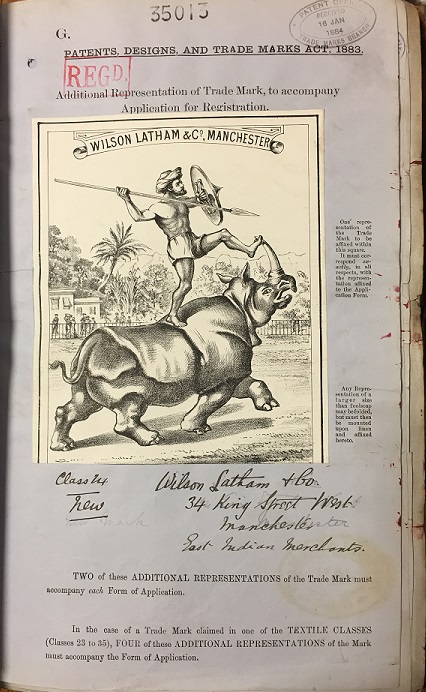 From 1876 onwards, to use a design as a trade mark with the protection of the law, you had to send a representation of the design to the Patent Office for registration.

Representations came in various forms, many on paper, others printed on fabric, a few on other materials such as tin. Some are detailed painted images, others colourful or monochrome sketches and others just typed single words.

The designs were pasted into books and given a registration number, which was also recorded in the books alongside the designs. They were assigned a ‘class’, within which similar types of products were grouped. There were fifty classes altogether (see Appendix). Further information was occasionally recorded in these books of representations, sometimes at a later date, alongside the representations themselves. Additional details might include:

Some entries contain no additional information at all, and have no corresponding register entry, making it difficult to identify the owner, manufacturer or agent.

Finding a representation for a specific company is tricky unless you know what year the trade mark was registered, or are prepared to trawl through dozens, perhaps hundreds, of books of representations.

Start your search by consulting the Trade Mark Journal, first published, by the Patent Office, in 1876. There is a complete set at the British Library, on microfilm. The indexes allow you to search by applicant name, though if you don’t have the year of registration you may have to consult multiple indexes. From these journals you can ascertain the registration number and year.

The representations are listed in the catalogue in ranges of registration numbers and year, along with The National Archives document reference that you will need to request a viewing of any book of representations.

If you only know the registration number:

If you only know the date/year of registration:

The record series descriptions in the catalogue give useful administrative histories that will help you to understand how the records were created.

4.3 Finding a representation for a cotton trade mark 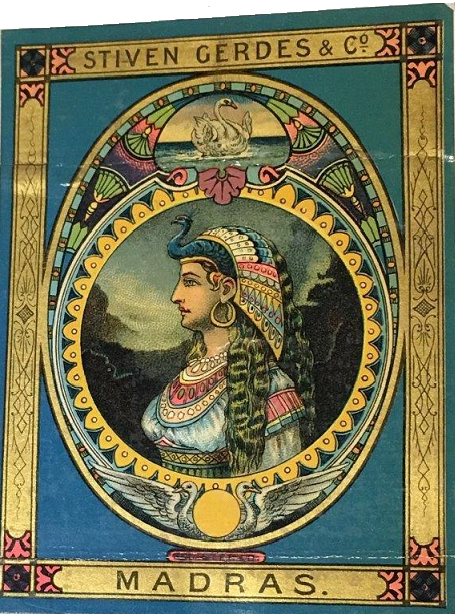 Due to the importance of the cotton trade in Lancashire, the Act of 1875 made provision for the establishment of a branch of the Patent Office to be opened in Manchester in October 1876, to deal specifically with applications for Cotton Marks in classes 23, 24 and 25 (see Appendix). The Manchester office closed after the trade marks acts of 1938, when a single series of representations was resumed in London.

When registering a cotton mark, applicants were required to send one master representation and four copies. A number were held in the Manchester office and the others were forwarded to London for administrative purposes and for inclusion in the registers.

BT 244 is split into several subseries, one for each of the material classes covering cotton classes 23, 24 and 25 (see Appendix).

If you do not know the date or registration number of the trade mark you will first need to consult the Trade Marks Journals, held at the British Library (see 4.2).

If you know the date/year of registration, to locate a book of representations you should browse through the catalogue listings within the respective material class for the cotton product in question:

A number of files were destroyed by enemy action in the Second World War.

5. Registers and how to locate them

Once the representation was received and given a number, an entry was made in a corresponding register with details of the manufacturer and/or company registering the trade mark.

An entry from one of the four surviving registers.

Unfortunately just four specimen registers (and two indexes), all for representations in BT 82, survive. Most registers from between 1876 and 1938 were destroyed under section 6 of the ‘Public Records Act of 1958’. These four registers and two indexes are in BT 900.

Click on the links below to request the registers – they are for trade marks registered…:

6. Other places to find records of trade marks

You can use our catalogue to search for records held in other archives. Search using the terms ‘trademark’ and ‘trade mark’ (both terms are used in equal measure).

The Intellectual Property Office (IPO), known until 2007 as the Patent Office, holds the modern-day responsibility for the registration of trade marks. Search the IPO database to find trade marks by name of company or description of trademark. If you find the registration number this way you can then look for the original representation in our records, assuming the trade mark was registered before 1939.

The ‘Trade Marks Journal’ has appeared continuously, in numbered issues since 1876, published weekly, in which all newly accepted marks are reproduced. Complete sets are available at the British Library on microfilm (the British Library trade marks collection pages offer further guidance).

The publications record details of the trade marks for which protection has been sought and also identify the individuals and/or companies which have made the application, in many cases by applicant name and by type of product.

Consult our legislation.gov.uk website for the texts of the various Acts of Parliament relating to trade marks.

The following texts are all available in The National Archives library.

Marks of Excellence: The History and Taxonomy of Trademarks, Per Mollerup (Phaidon, 2013)

The table below shows the 50 material classes established by the Trade Mark Registration Act of 1875. To be granted trade mark protection, applicants had to register their goods under one or more of these classifications.