These records, from series ADM 196, are the service records of officers who joined the Royal Navy between 1756 and 1931.

They also feature the records of Royal Marines officers commissioned between 1793 and 1925.

Until the late 19th century these service records tend to be very basic. The majority will contain:

From the late 19th century onwards some will also contain: 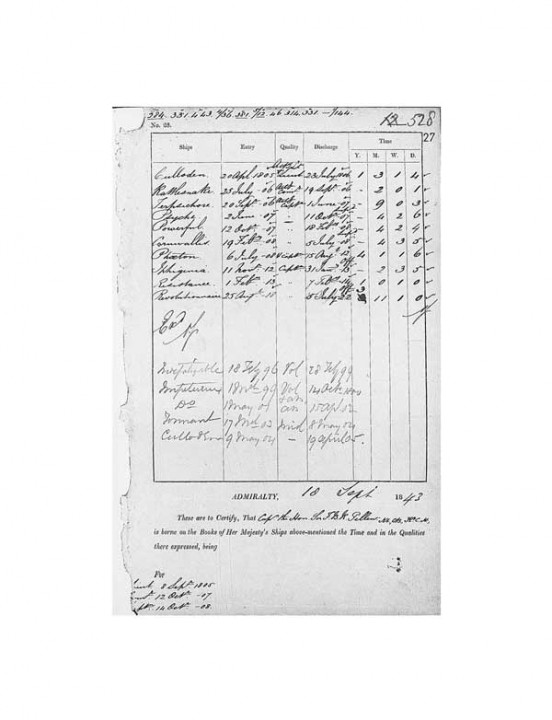 It is possible for an officer to have multiple service records and in most of these instances we have joined them into one download.

These examples are taken from the service record of Sir Fleetwood Broughton Reynolds Pellew.

The first page, ADM 196/5, is an example of an early service record. It lists the various ships that Pellew served on and his rank during each service.

The second image is also part of Pellew’s service record, ADM 196/37. It lists his promotions, the date they took effect and various other details, including the fact that on 14 December 1852 Pellew hoisted his flag whilst on board Neptune at Portsmouth, and that on 6 February 1853 he was ordered to take his flag down. Lastly the record tells us that Pellew died on 28 July 1861.

If you cannot find a service record the explanation may be that:

Try searching the Royal Navy First World War Lives at Sea database by name, service number and numerous other criteria. As of June 2021, the database contains 32,000 records and is continually being updated. Once completed (scheduled for November 2022), it will contain information relating to all the Royal Navy officers and ratings that served in the First World War. The database is being compiled largely from records held at The National Archives and there is no charge for access. It is a joint project between The National Archives, The National Maritime Museum and the Crew List Index Project with the help of a global team of volunteers.