These records are Royal Air Force combat reports written during the Second World War. They are the official reports which pilots or air gunners filed after they had encountered enemy aircraft on operational flights.

The reports cover action seen by the squadrons, wings and groups serving with Fighter Command, Bomber Command, Coastal Command and the Fleet Air Arm. Now held at The National Archives in series AIR 50, they include Commonwealth, United States Army Air Force and Allied units based in the United Kingdom during the Second World War.

The records mainly consist of either a ‘personal combat report’ or a ‘fighter command combat report’. They sometimes include correspondence or notes.

The reports record details such as:

The reports also give a detailed narrative of what actually happened. The pilot or air gunner would describe how many rounds he used, what hits he achieved and if the aircraft was destroyed, damaged or considered as probably destroyed.

You can search the surviving records in Discovery, our catalogue, by filling in any or all of the fields below.

You can search by the name of the author/s of the report, whether the pilot (for fighters) or air gunner (for bombers), but not by the name of any other crew members. 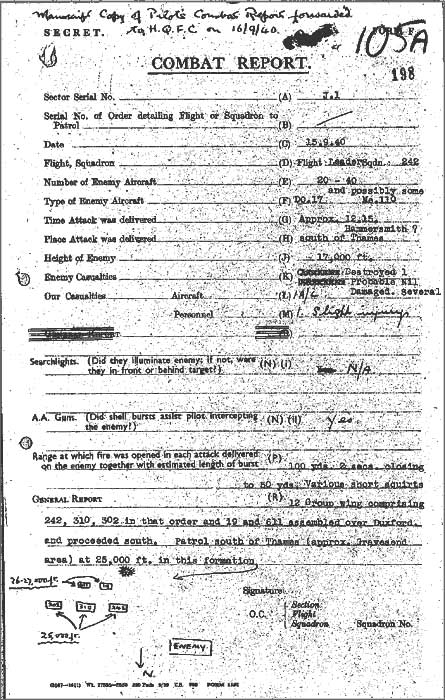 On the right is an extract from a combat report written by Douglas Bader. Bader was given command of No. 242 Squadron in June 1940.

The report is for Sunday 15 September, considered by many as the turning point in the Battle of Britain. It was on this day that Bader’s Duxford Wing, 12 Group, took to the air twice to help 11 Group break up a massed Luftwaffe attack on London.

This series is incomplete and the record you are searching for might not be in this online collection.

You may find what you are looking for in RAF operations record books and aircrew logs.