Home >  Help with your research > Research guides > Public rights of way, roads and other highways

How to look for records of... Public rights of way, roads and other highways

This guide provides advice on where to look for records of public rights of way, roads and other highways in England and Wales. The National Archives is not the best place to start looking for these kinds of records and much of the advice in this guide directs you elsewhere.

Each local highway authority (county council or unitary authority) will have records of public rights of way in its area and local archives are therefore the best place to start a search.

The information in this guide is not a statement of law and we cannot provide legal advice of any kind. For advice on property boundary disputes you should consult the Land Registry pages on GOV.UK or contact a legal adviser.

You can find further advice on records of rights of way, highways and related subjects at the following websites and institutions:

2. What are public rights of way and highways?

Public rights of way allow the public to walk, or sometimes ride, cycle or drive, along specific routes over land which belongs to someone else – the land itself is often privately owned.

Though the term highway is popularly used to refer to roads, its legal definition covers any public road, track or path. Historically, a highway, which was also referred to as ‘the King’s highway’, was defined as a public passage for the use of the sovereign and all his or her subjects. The Highway Act 1835 defines highways as ‘all Roads, Bridges (not being County Bridges), Carriageways, Cartways, Horseways, Bridleways, Footways, Causeways, Churchways and Pavements’.

There are further, more detailed and contemporary definitions at Land Registry Title Deeds Online and the IPROW website.

3. Rights of way on maps

In this section you will find advice on the most significant kinds of maps that show rights of way, where they are held, whether at The National Archives or elsewhere, and some advice on how to find them. In section 8 and section 9 of this guide there is advice on some of the other kinds of records that contain maps showing rights of way and highways.

3.1 Definitive maps and statements 1949 to present

Local authorities are required to make these resources available for public inspection. Some local archives may also hold old, as well as current, definitive maps and statements.

Contact the local authority directly or search for ‘definitive maps’ in our catalogue, using the filters on the left-hand side of the results page to restrict your search results to ‘Other archives’, as shown: 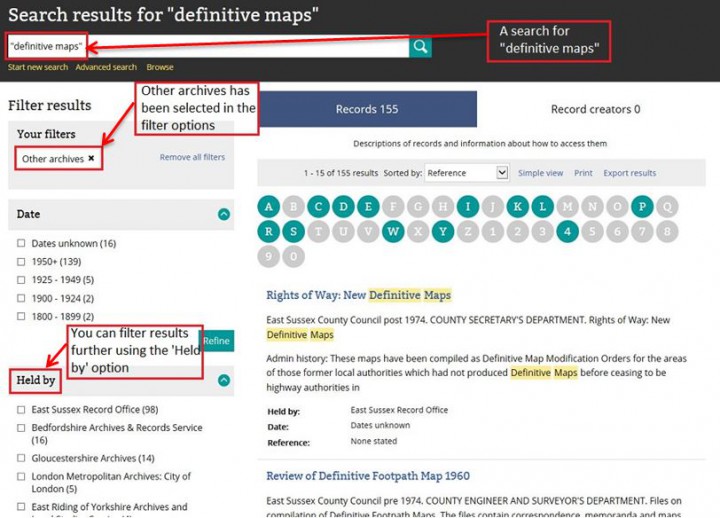 Filtering results after a search for “definitive maps” in The National Archives catalogue.

See the very useful guide to definitive maps (PDF) published by GOV.UK for an in-depth explanation of the maps themselves, rights of way in general and the legal framework that underpins it all.

Until the 1960s, Ordnance Survey maps bore a disclaimer stating that the depiction of any road, track or path does not constitute evidence of the existence of a public right of way.

With the public availability of definitive maps, Ordnance Survey maps at 1:50,000 and 1:25,000 scales, from 1960 onwards, do indicate rights of way including footpaths, bridleways, restricted byways and byways open to all traffic, based on the definitive maps.

Although published Ordnance Survey maps are not sent to The National Archives as a matter of policy, there are some maps among the Ordnance Survey records held here. Those most relevant to rights of way are:

Papers about Ordnance Survey policy regarding the depiction of rights of way are in OS 1 and OS 11.

4. Rights of way and highway legislation

There have been numerous Highways Acts in the UK dating back to the 16th century, most of which contained sections on rights of way. See legislation.gov.uk for Highways Acts since 1835.

Other significant public acts affecting rights of way and highways, all available on legislation.gov.uk, include:

5. Records of the removal of right of way status: extinguishments and stopping up orders

When the legal obligation to provide public access along a path, track, road or any other route ceases, the right of way, in legal language, is said to be ‘extinguished’ or ‘stopped up’.

Notices about proposals to stop up or divert public rights of way and highways were, and to a lesser extent still are, usually published in the local press and in the London Gazette. Subsequently a legal order authorising the change is made. These extinguishment or stopping up orders are held in a variety of places.

MT 78 contains a large number of stopping up orders made between 1941 and 1974. Use the MT 78 series search to search this series by:

Look for stopping up orders in the following series by clicking on the references below and searching with the terms “extinguishment”, “stop up” or “stopping up”:

Copies of orders made under the Highways Act 1959 are likely to be held in local archives.

5.2 Records of extinguishments as a result of land requisitioned for war

The exercise of emergency powers to requisition land during the Second World War often affected rights of way over such land. Orders to stop up or divert highways under the Defence (General) Regulations 1939 and other relevant legislation are among the records in MT 78.

Use the MT 78 series search to search this series by:

Other relevant record series, which you can search by clicking on the references below and searching with the words “extinguishment”, “stopping up”, “rights of way” or “right of way”, include:

5.3 Records of extinguishments and stopping up orders pre-19th century

Click on the references below to search the respective series for pre-19th century stopping up orders (suggested search terms are provided in brackets):

There are also some stopping up orders from the late 17th century onwards in KB 16, some with maps and considerable background detail. These records, however, are hard to find as the series has not been described in any detail in our catalogue.

Before 1835 a landowner could declare or, in the conventional legal language, could ‘dedicate’ a road as a public right of way and it automatically became the liability of the public to repair it – whether it was of any great utility or not.  This changed with the 1835 Highways Act, Section 23 of which established that if a landowner proposed to dedicate a road or bridleway as a public highway and intended that it would be repaired by the public, notice had to be given in writing to the surveyor of the parish.

Some of these notices survive in local archives but there are none in The National Archives. This element of the law was repealed by the Highways Act 1959.

7. Records of rights of way and highways on land owned by the Crown

The records of the Crown Estate are held at The National Archives under the CRES department code. Some of these records contain information on rights of ways, roads and other highways, particularly when there were alterations to the land that affected rights of way, such as the building of new highways and turnpike roads.

Search for CRES records in our catalogue, particularly in the series listed below. Click on the series codes below to search within that series using the search terms suggested:

8. Roads and rights of way on enclosure documents

Many enclosure awards (legal documents recording the ownership and distribution of ‘enclosed’ land) contain information about the status of roads and other ways, including public paths and occupation roads. They may state who was responsible for their maintenance and for the maintenance of hedges and fences along the boundaries of fields. Some enclosure maps distinguish between major and minor roads but no inferences should be drawn from the absence of such information.

For more information about using these records, see our guide to Enclosure awards.

9. Roads and rights of way in 19th century tithe documents

For an understanding of tithe records and why they were created see our Tithes guide.

Although tithe maps may show rights of way and can provide all kinds of information about roads, footpaths, bridleways and other tracks, they were not compiled with any intention to demonstrate rights of way. Tithe maps and the records of apportionments that go with them should, therefore, be treated with caution when used to try to establish rights of way or public highways. The inferences that can be drawn from the depiction or non-depiction of a route will vary considerably from map to map.

Tithe maps and apportionments can, nevertheless, be rich in detail and some, as well as showing rights of way, can include information about:

The existence of a public right of way could be claimed as part of the initial valuation of the land that took place under the terms of the Finance (1909-10) Act 1910, and many ways are thus recorded in the Valuation Office Field Books. However, it should be noted that it is the mere fact of the existence of a way and not normally its precise location or course which is recorded.

Turnpike roads were roads whose maintenance was funded by tolls levied on passengers. A turnpike was a gate across a road, usually a minor road or byway, opened to allow those who had paid the toll to pass. Many turnpikes were authorised by local Act of Parliament, and administered by turnpike trusts. From 1814 there was a requirement to deposit plans of turnpike roads with local authorities, most of which, if they survive, are in the Parliamentary Archives.

Turnpikes were managed by turnpike trusts which were set up under individual Acts of Parliament. The last Turnpike Act was passed in 1836. Maintenance responsibility was transferred in the latter part of the 19th century from turnpike trusts to highway boards.

There are large numbers of records relating to turnpikes in local archives and a significant number at The National Archives too. Search our catalogue with the following words and combinations for a variety of related records:

The responsibility for submitting proposals for long distance routes along public rights of way and for making arrangements with local authorities for the establishment of routes lay with the National Parks Commission.

Search in the following series, in particular, for records related to long distance walking routes:

John Riddall and John Trevelyan, Rights Of Way: A Guide to Law and Practice, 4th edition (Henley-on-Thames and London, 2007). This and previous editions are often called the ‘Blue Book’.

Land and property requisitioned for war in the 20th century