How to look for records of... Internees

This is a guide to finding records of individual internees. During the First and Second World Wars both sides set up internment camps to hold enemy aliens – civilians who were believed to be a potential threat and have sympathy with the enemy’s war objectives. Internees were treated differently to prisoners of war and were given more privileges.

The National Archives does not hold registers of all internees. Very few records of individual internees survive for the First World War.

An array of records exist documenting people who were interned in the First and Second World Wars as well as of people who were exempted from internment. Many of these records are held within our Home Office collections (identified by catalogue references beginning HO) and are available online.

Among these online collections is the Aliens Department internees index, 1939–1947, drawn from record series HO 396. The index cards which make up this series (example below) provide more detail than any other single record on individual internees. They document mostly Germans, Austrians and Italians, as well as their spouses, interned or considered for internment by tribunals during the Second World War. Most of the cards were originally issued in September 1939 when the first round of decisions on internment were made. They were reused for later tribunals that took place in the early 1940s when larger numbers of resident aliens were interned following panic in Britain about the course the war was taking. Those interned included Jewish refugees who had escaped Nazi persecution.

They contain personal details on the front and sometimes information about the individual’s case on the reverse. Access to records of individuals who were interned is partially restricted, with only the front of the internment card open to access without restriction (you can request the opening of restricted records under the Freedom of Information Act 2000 by filling out our Freedom of Information enquiry form or by writing to our Records Enquiry Service at The National Archives, Kew, Richmond, Surrey TW9 4DU. Cards for aliens who were considered for internment but were not actually interned, also held in HO 396, are open without restriction. 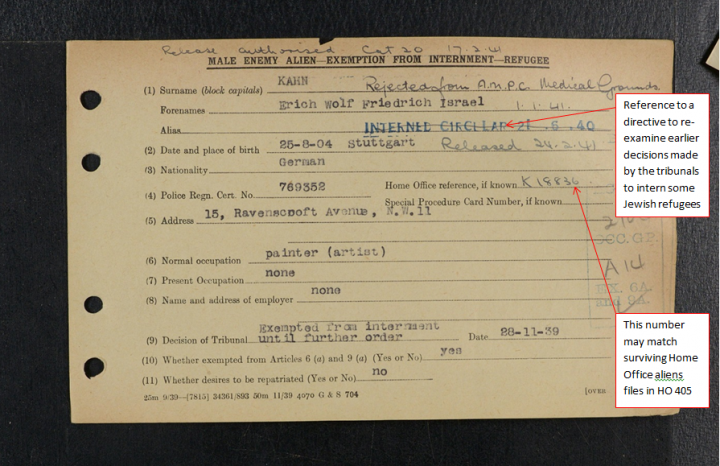 An Exemption From Internment Card (catalogue reference HO 396/180/00136). The card shows that although the person in question was exempted from internment in 1939, a decision was then made in 1940 to intern the individual, whose release was then authorised in 1941.

Details of the other record series from which the online collection on Findmypast is drawn are below:

Passenger lists (which may include details of deported enemy aliens), 1939–1942

For the first two years of the Second World War about 8,000 enemy aliens were temporarily interned in British camps prior to being deported to the colonies and the dominions.

Search and download lists of passengers leaving from UK and Irish ports travelling to places such as Canada, India, New Zealand and Australia, including deported internees, on the findmypast.co.uk (£) website.

Many ships carrying internees were torpedoed at sea in enemy action and these losses led to the end of the policy of deporting internees.

Search and download selected prisoners of war records 1715-1945 from Findmypast (£). These include some civilian internees.

Search by name for details of several hundred captured allied civilians as recorded on German record cards. These are among the records primarily of prisoners of war held by German authorities during the Second World War, in series WO 416. Not all the records in this series are yet open to the public, so in some cases there are access restrictions.

Consult CO 980 for civilian internees detained when Singapore and Hong Kong were invaded by the Japanese. There are also files on conditions in prisoner of war and internee camps; and on aliens interned in British Colonial territories.

The card index, CO 1070, was created by the Prisoners of War and Civilian Internee Department during the Second World War, to record information relating to civilians and civilian volunteers who were, or were thought to be, subject to internment or imprisonment in Hong Kong and Malaya.

Correspondence from the Foreign Office’s Prisoners of War and Aliens Department, 1915–1919

Use the search box below to search in series FO 383 by name for correspondence about British subjects resident overseas and interned during the First World War.

Narrow your search by using double quotation marks to find a person’s full name, such as “Henry Keates”:


Please note, some of these are available on Findmypast (£).

Search the very small sample of Home Office case files for internees in HO 214 by name:

Search among the Aliens Personal Files in series HO 405 and HO 382 by name and/or date/year of birth. These may include internment papers of foreign citizens interned in the UK during the Second World War. These are Home Office files created for European immigrants who arrived in the UK between 1934 and 1948 and who applied for naturalisation.

Registered files of the Prisoners of War Department, 1939–1948

Browse the Foreign Office files of prisoners of war and internees, including lists of alien internees, in FO 916.

International Committee of the Red Cross

Contact the International Committee of the Red Cross, which keeps information on all known prisoners of war and internees of all nationalities affected by conflicts during the 20th century. In general, searches are only made in response to written enquiries and an hourly fee is charged. However, some of their First World War records are available to view online free of charge.

Visit the website describing the work of the Emergency Committee for the Assistance of Germans, Austrians and Hungarians in Distress to find out more about internees in the First World War.