How to look for records of... French muster rolls from the Battle of Trafalgar 1805

These are muster rolls of ships which were led by Captain (later Vice-Admiral) Richard Strachan, and sent to capture French ships in the Bay of Biscay on November 1805.

At the time Royal Navy sailors received bonuses for capturing enemy vessels. They were rewarded for each ship captured and returned to the UK, and given a further bonus for men captured.

The collection includes muster rolls and other documentation seized at the time from the following ships:

These were the only enemy ships involved in the Battle of Trafalgar to be taken to the UK.

You can search and download the records in Discovery. (£)

Use the form below. You don’t need to complete every field to find a record.

The muster rolls include details of the sailors, soldiers and passengers of each vessel.

The details recorded for each individual vary from book to book. 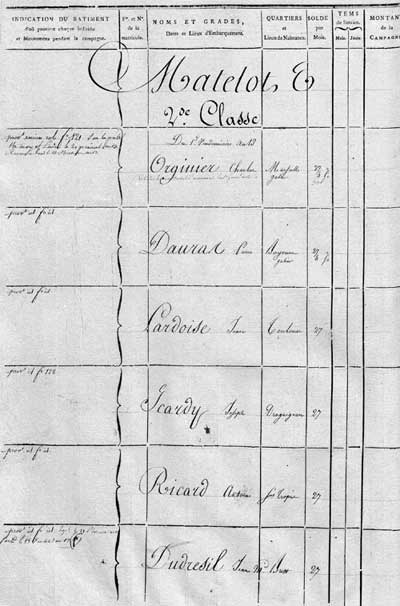 An example from the Mont-Blanc muster roll is shown on the right.

Although involvement in the battle had been minimal, deaths, injuries and sickness are recorded in these documents, including the names of those who were killed at Trafalgar.

The records reveal that there were a number of nationalities aboard the French ships at their time of capture.

Although involvement in the battle had been minimal, deaths, injuries and sickness are recorded in these documents, including the names of those who were killed at Trafalgar.

The records reveal that there were a number of nationalities aboard the French ships at their time of capture.

One of the documents seized from the Mont-Blanc was a helmsman’s log which covers the period of 16 September 1805 to 4 November 1805.

The helmsman’s log was recorded at four to six hourly intervals as the fighting was taking place and this is the first time there has been access to an eyewitness account from behind the French line.

The record also provides an account of the French response to Strachan’s actions and subsequent capture.

The records can include French Revolutionary Calendar dates. Consult the table below to convert the calendar dates.