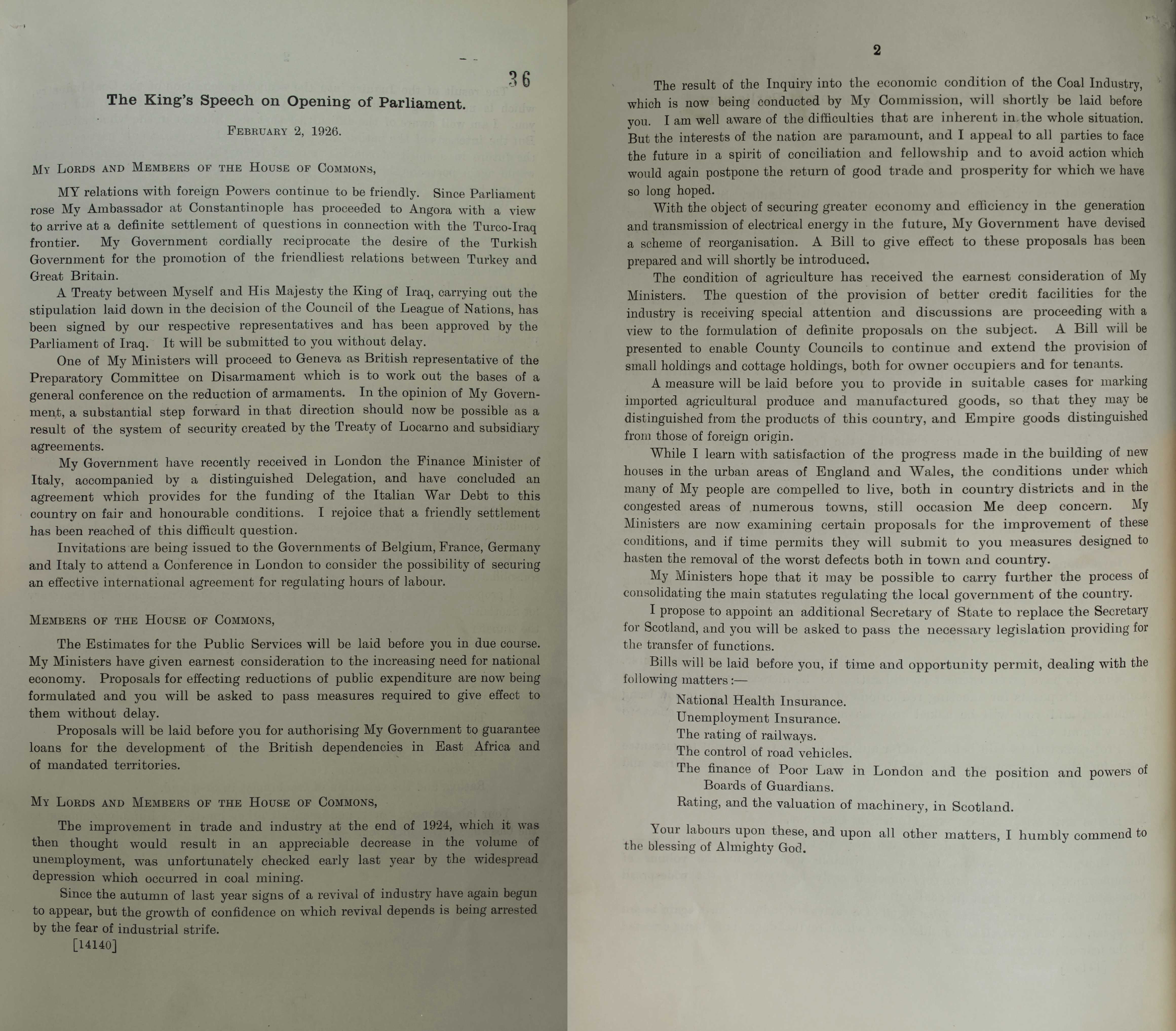 The King’s Speech on Opening Parliament

MY LORDS AND MEMBERS OF THE HOUSE OF COMMONS

MY relations with foreign Powers continue to be friendly. Since Parliament rose My Ambassador at Constantinople has proceeded to Angora with a view to arrive at a definite settlement of questions in connection with the Turco-Iraq frontier. My Government cordially reciprocate the desire of the Turkish Government for the promotion of the friendliest relations between Turkey and Great Britain.

A Treaty between Myself and His Majesty the King of Iraq, carrying out the stipulation laid down in the decision of the Council of the League of Nations, has been signed by our respective representatives and has been approved by the Parliament of Iraq. It will be submitted to you without delay.

One of My Ministers will proceed to Geneva as British representative of the Preparatory Committee on Disarmament which is to work out the bases of a general conference on the reduction or armaments. In the opinion of My Government, a substantial step forward in that direction show now be possible as a result of the system of security created by the Treaty of Locarno and subsidiary agreements.

My Government have recently received in London the Finance Minister of Italy, accompanied by a distinguished Delegation, and have concluded an agreement which provides for the funding of the Italian War Debt to this country on fair and honourable conditions. I rejoice that a friendly settlement has been reached of this difficult question.

Invitations are being issued to the Governments of Belgium, France, Germany and Italy to attend a Conference in London to consider the possibility of securing an effective international agreement for regulating hours of labour.

MEMBERS OF THE HOUSE OF COMMONS

The estimates for the Public Services will be laid before you in due course. My Ministers have given earnest consideration to the increasing need for national economy. Proposals for effecting reductions of public expenditure are now being formulated and you will be asked to pass measures required to give effect to them without delay.

Proposals will be laid before you for authorising My Government to guarantee loans for the development of the British dependencies in East Africa and of mandated territories.

MY LORDS AND MEMBERS OF THE HOUSE OF COMMONS

The improvement in trade and industry at the end of 1924, which it was then thought would result in an appreciable decrease in the volume of unemployment, was unfortunately checked early last year by the widespread depression which occurred in coal mining.

Since the autumn of last year signs of a revival of industry have again begun to appear, but the growth of confidence on which revival depends is being arrested by the fear of industrial strife.

The result of the Inquiry into the economic condition of the Coal Industry, which is now being conducted by My Commission, will shortly be laid before you. I am well aware of the difficulties that are inherent in the whole situation. But the interests of the Nation are paramount, and I appeal to all parties to face the future in a spirit of conciliation and fellowship and to avoid action which would again postpone the return of good trade and prosperity for which we have so long hoped.

With the object of securing greater economy and efficiency in the generation and transmission of electrical energy in the future, My Government have devised a scheme of reorganisation. A Bill to give effect to these proposals has been prepared and will shortly be introduced.

The condition of agriculture has received the earnest consideration of My Ministers. The question of the provision of better credit facilities for the industry is receiving special attention and discussions are proceeding with a view to the formulation of definite proposals on the subject. A Bill will be presented to enable County Councils to continue and extend the provision of small holdings and cottage holdings, both for owner occupiers and for tenants.

While I learn with satisfaction of the progress made in the building of new houses in the urban areas of England and Wales, the conditions under which many of My People are compelled to live, both in country district and in the congested areas of numerous towns, still occasion Me deep concern. My Ministers are now examining certain proposals for the improvement of these conditions, and if time permits they will submit to you measures designed to hasten the removal of the worst defects both in town and country.

My Ministers hope that it may be possible to carry further the process of consolidating the main statutes regulating the local government of the country.

I propose to appoint an additional Secretary to replace the Secretary for Scotland, and you will be asked to pass the necessary legislation providing for the transfer of functions.

Bills will laid before you, if time and opportunity permit, dealing with the following matters-:

The rating of railways.

The control of road vehicles.

The finance of Poor law in London and the position and powers of Boards of Guardians.

Rating, and the valuation of machinery, in Scotland.

Your labours upon these, and upon all other matters, I humbly commend to the blessing of Almighty God.